An AP-GfK water poll found that only one-third Americans drink straight from their tap, largely due to taste and contamination concerns.

The pollsters only released high-level summary data, but in reporting their results, AP-GfK noted that “lower-income Americans and those from minority groups are especially likely to worry about their water being contaminated.”

I took the data from the poll and created some PowerPoint slides, which are described below and available for free download.

About one-third of Americans drink straight from the tap, one-third use a water filter, and one-third rely on bottled water. This poll only reports national data, but I suspect the popularity of bottled and filtered water varies around the country. 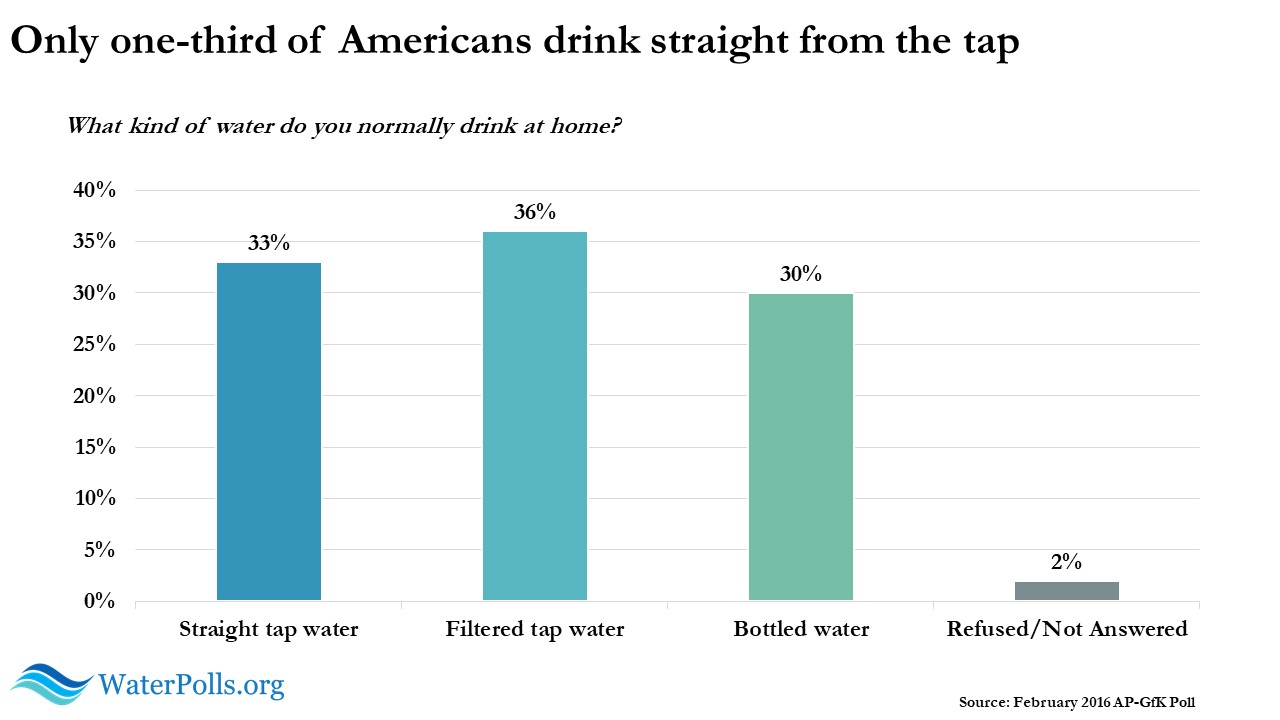 Both taste and contamination concerns appear to be equally important in motivating people to avoid tap water. As shown in the graphic below, both factors were cited in roughly equal proportions by those who don’t drink from the tap. 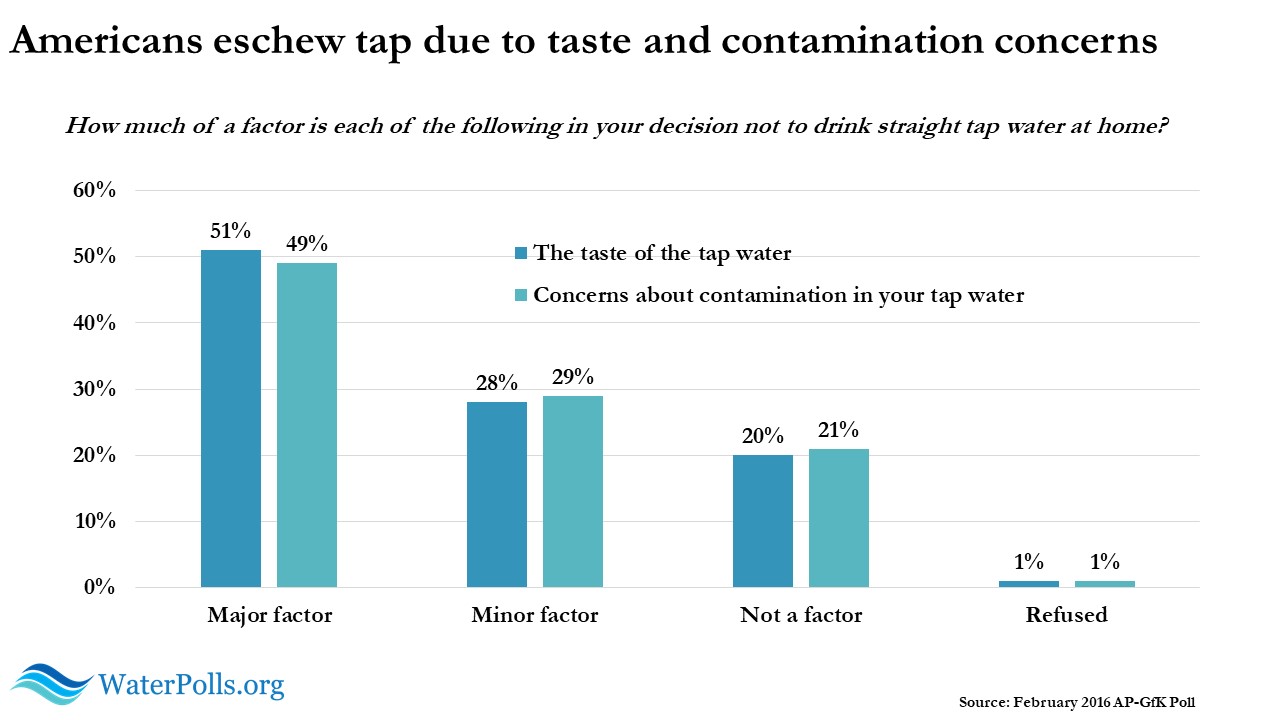 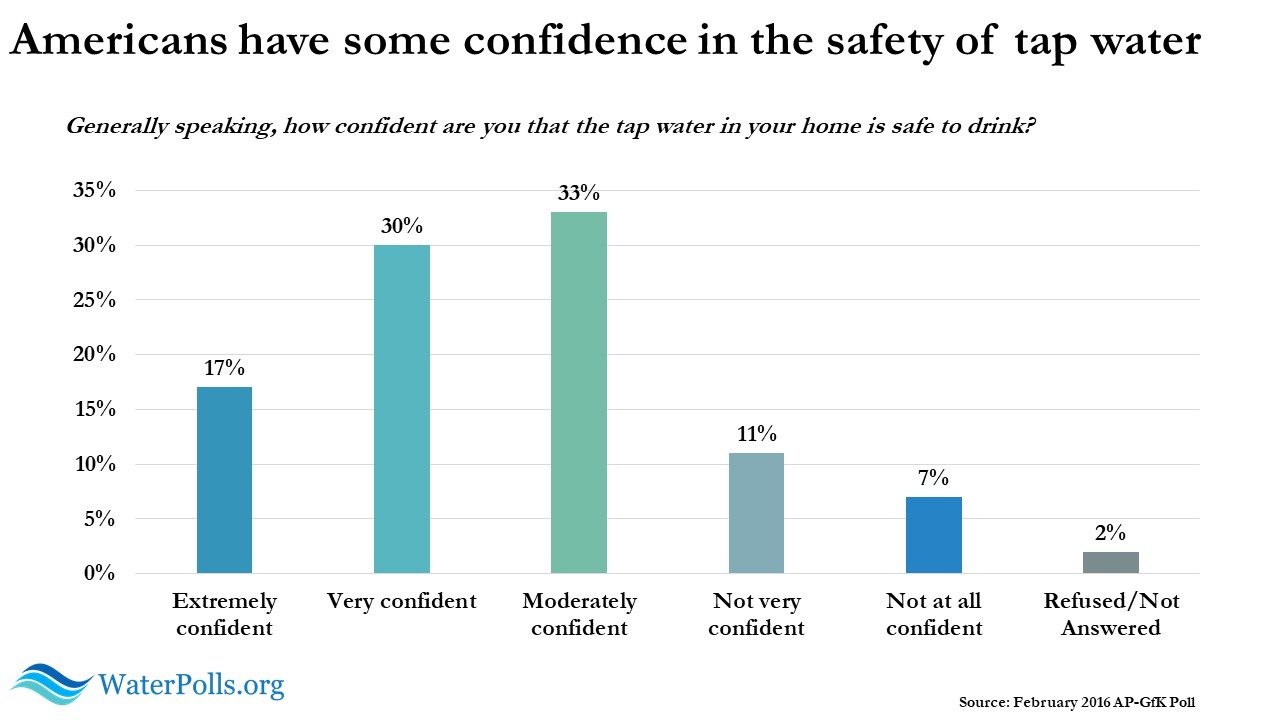 The data above comes from the entire sample. But when the pollsters looked at confidence in tap water among various income and racial groups, they found some big disparities:

As I’ve noted in previous posts, worries about water tend to be more pronounced among non-white and lower-income Americans.

The AP-GfK water poll also asked Americans about whether the federal government should be doing more, less, or about the same in ensuring the safety of drinking water. As shown below, only 7 percent of those surveyed said they wanted less federal involvement, while 50 percent want to see more engagement and 40 percent think the current level of effort is about right. 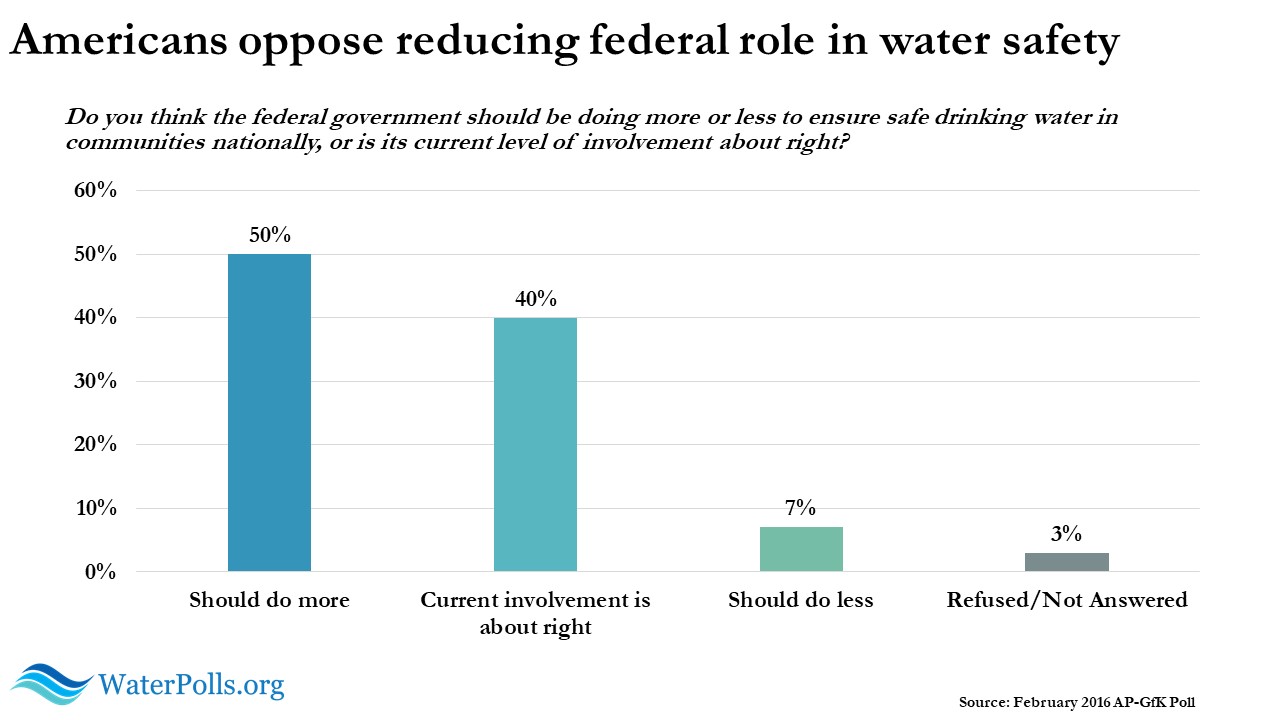 Once again, pollsters found some significant differences according to race. Blacks (69 percent) and Hispanics (62 percent) were more likely than whites (44 percent) to say the federal government should be doing more to protect drinking water.

Not surprisingly, there was also a partisan gap in this policy question. Among Democrats, 66 percent want the feds to do more, compared to 50 percent of independents and 33 percent of Republicans.

“Those in households making less than $50,000 are more likely than those making more than $100,000 to say the federal government should do more, 57 percent to 40 percent,” the pollsters reported. “Those living in urban areas (60 percent) are more likely than those in suburban (50 percent) or rural areas (44 percent) to want more federal government involvement.”

Flint made a deep impression

The lead poisoning crisis in Flint generated national headlines and appears to have been widely followed: 22 percent of Americans said they were following the story very or extremely closely, while 38 percent said they were following the news somewhat closely. It’s worth noting that this poll was taken in February 2016, when the story was receiving considerable press attention, so the results might be different if the question were asked today. 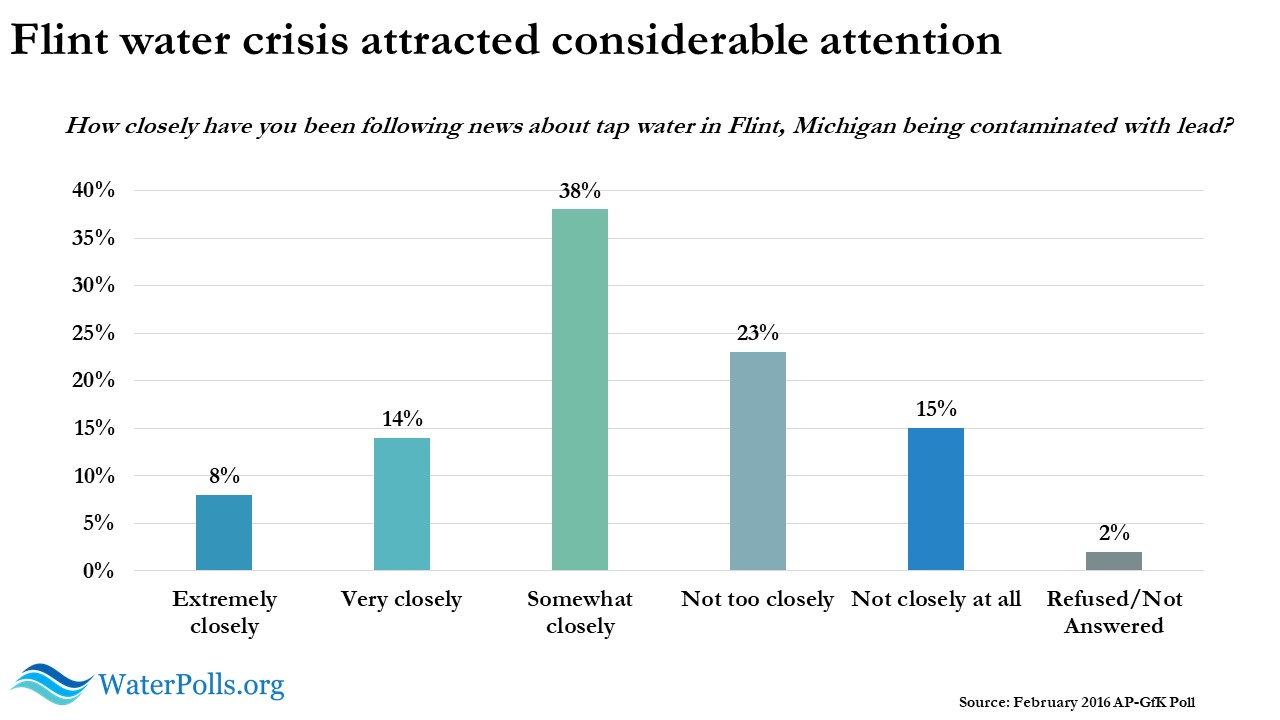 Was the lead poisoning in Flint just an isolated episode? Or was it symptomatic of a larger problem? When pollsters asked about that, they found 56 percent of respondents believe the problems in Flint are signs of a more widespread issue, as shown below. 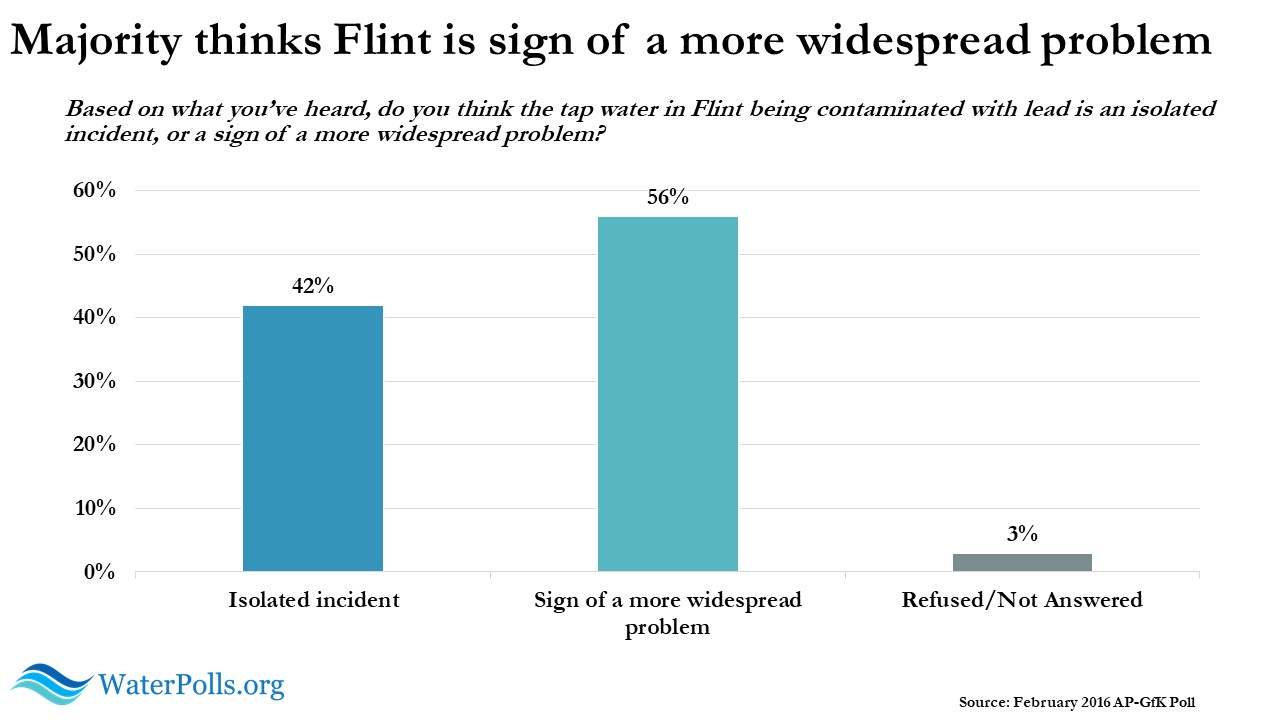 Blacks are significantly more likely than whites or Hispanics to say the problem in Flint, a majority black city, is a sign of a bigger problem. Likewise, 32 percent of blacks say they are following the Flint story very closely, compared to 20 percent of Hispanics and 19 percent of whites.

Overall, this poll didn’t reveal any big surprises and reconfirmed much of what we already know: many Americans, especially minorities and lower-income citizens, are worried about the quality of their drinking water and they don’t want to see the government roll back its efforts to protect potable supplies.

Here’s info from AP-GfK on the poll’s methodology:

The AP-GfK Poll of 1,033 adults was conducted online Feb. 11-15, using a sample drawn from GfK’s probability-based KnowledgePanel, which is designed to be representative of the U.S. population. The margin of sampling error for all respondents is plus or minus 3.4 percentage points.

Respondents were first selected randomly using telephone or mail survey methods and later interviewed online. People selected for KnowledgePanel who didn’t otherwise have access to the Internet were provided access at no cost to them.

If you’re scoring at home and are curious about the KnowledgePanel, it’s a representative sample of 55,000 Americans who complete surveys online. The KnowledgePanel, a brainchild of two Stanford professors, mails a limited number of invitations to U.S. addresses, then offers “cash and rewards” to people so they participate. Here’s the full story on the approach.