A May 2017 poll found that water pollution, air pollution, and climate change rank high on Americans’ list of top fears. Concern about environmental problems was much higher than during the 2016 survey, and the spike in worry was likely due to the intervening election.

The Chapman University Survey of American Fears was based on a nationwide survey of 1,207 adults who were asked about 80 fears “across a huge variety of topics ranging from crime, the government, the environment, disasters, personal anxieties, technology and many others,” according to the Southern California private university.

As shown in the graphic below from Chapman University, four of the top 10 fears dealt with environmental threats: “pollution of oceans, rivers and lakes,” “pollution of drinking water,” “global warming and climate change,” and “air pollution.” For all four of these problems, between 45 percent and 53 percent of Americans said they were “afraid” or “very afraid.” 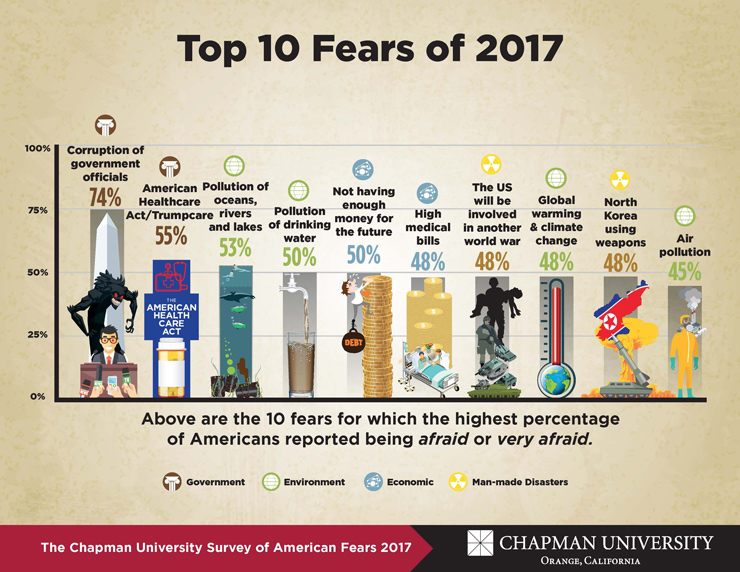 Here’s how Chapman University describes the prominence of environmental problems:

What is, perhaps, most striking about American fear in 2017 is that environmental fears, including water pollution and drinking water quality, figure more prominently than ever before. Environmental issues never cracked the top ten fears in our previous surveys.

In 2017, there was a sharp increase in environmental fears, likely due to fears about policy changes in Washington. The Trump Administration has charted a drastically different path; ordering the US Environmental Protection Agency not to enforce major pollution laws, and firing the EPA’s entire Science Advisory Board.

If you look at the 2016 version of the fear index, environmental problems are nowhere to be found: 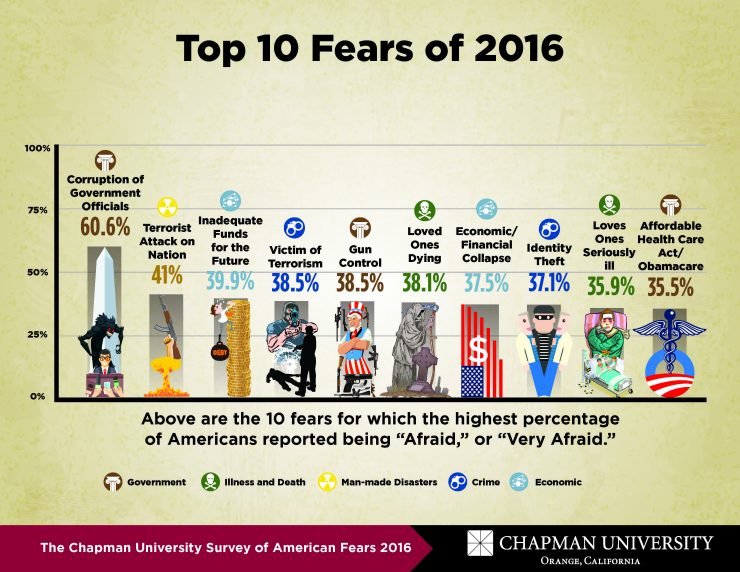 Likewise, the 2015 survey didn’t have any environmental issues crack the top 10. 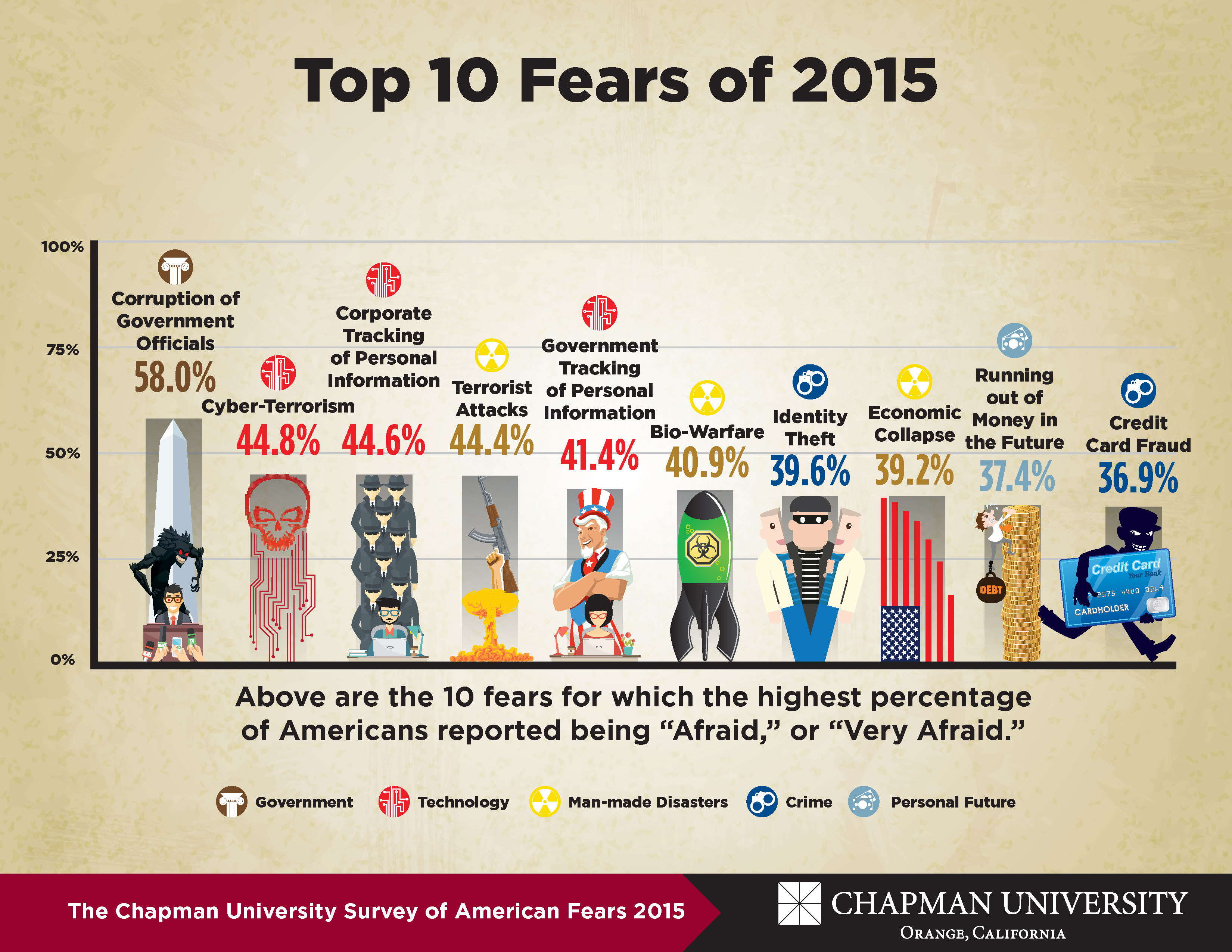 It was a different story in 2017, when concern about environmental problems spiked. I used data from the 2016 and 2017 surveys to create the graphic below (click to enlarge), which sorts the fears by percent of Americans saying they were afraid or very afraid of the threat. I’ve also added data on the change from 2016 to 2017. 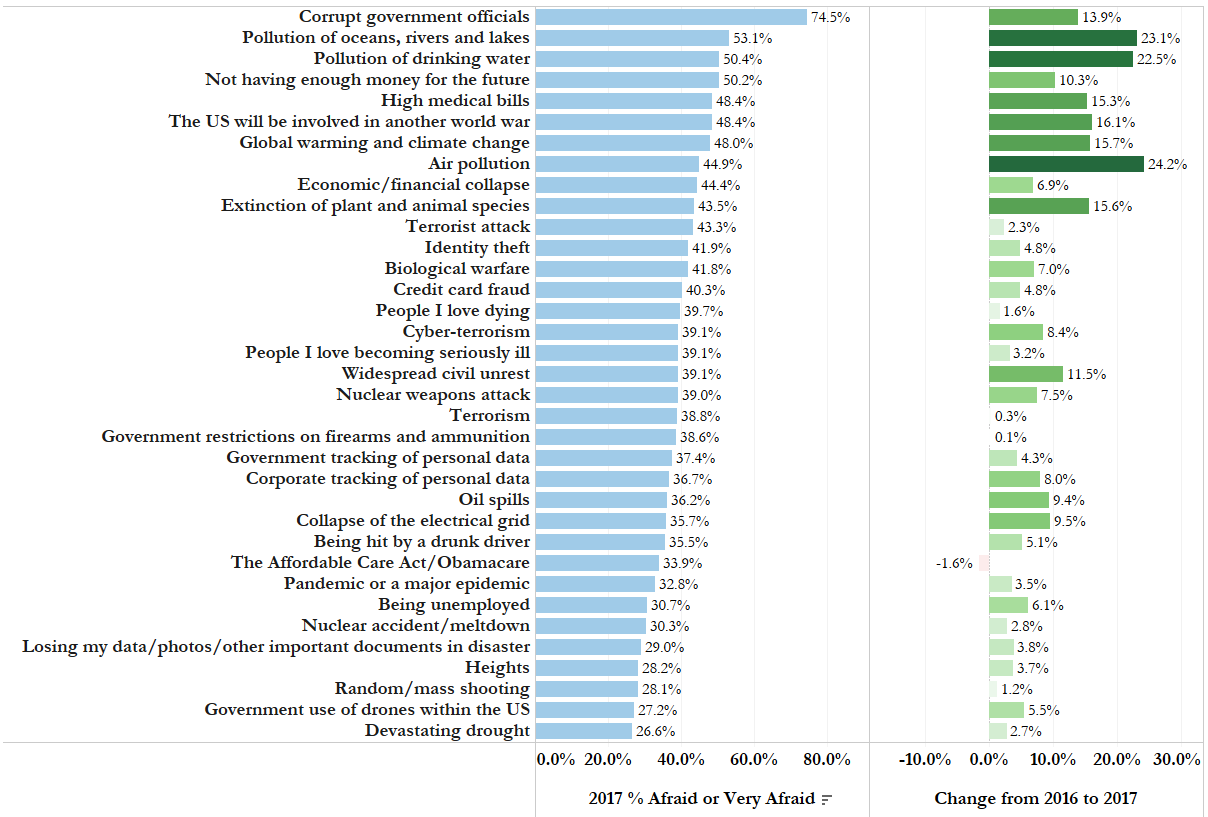 All of the environmental threats registered big increases from 2016 to 2017:

The Chapman survey divides fears into a number of domains, such as environmental, economic, natural disasters, and technology. While most other domains had a mix of increasing and decreasing concern, all six fears in the environment category showed marked increases (see this Tableau dashboard I created to play with the data more).

Other fears that witnessed big jumps in concern include “the US will be involved in another world war,” “high medical bills,” “corrupt government officials,” and “widespread civil unretst.” Here’s a list of fears sorted by the biggest increase from 2016 to 2017: 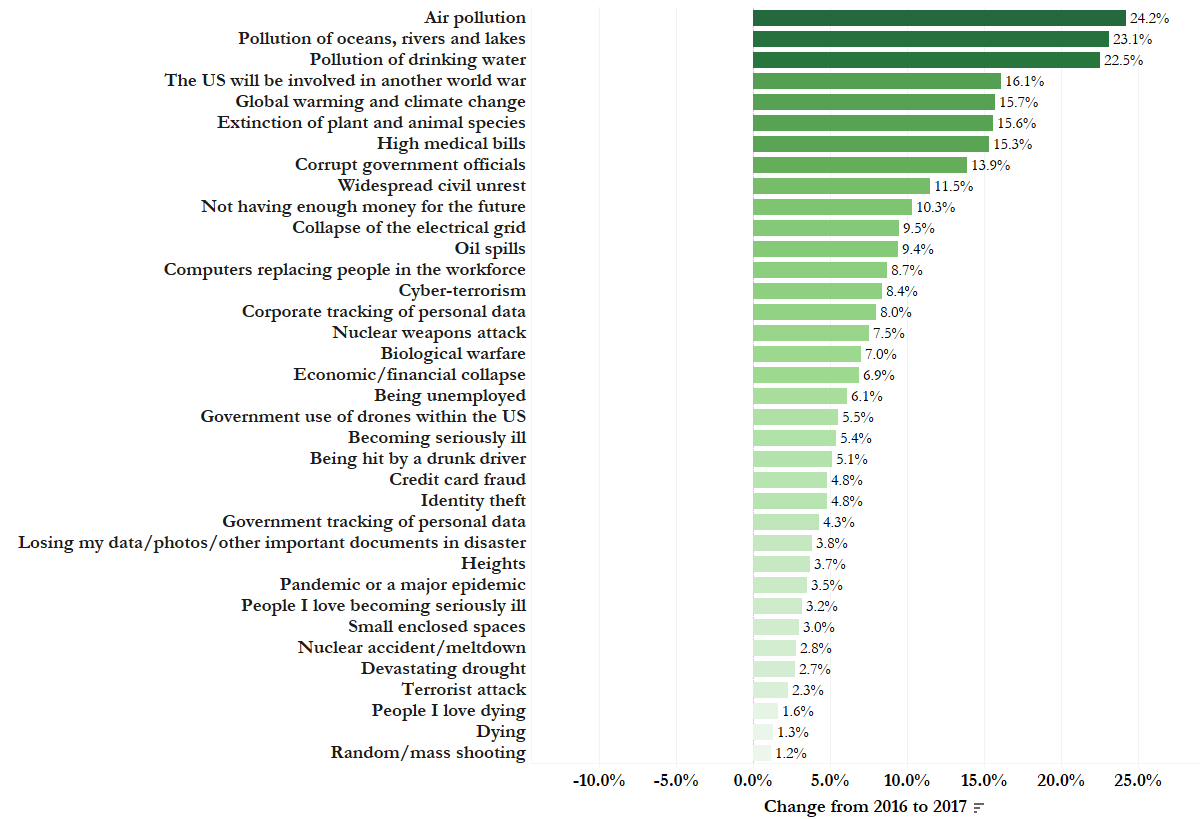