Conservation in the West poll: findings on water-related public opinion

Conservation in the West poll: findings on water-related public opinion

The 2018 edition of Colorado College’s Conservation in the West Poll has once again found strong support for protecting the region’s water resources, as well as increasing concern about both quality and supply issues.

When asked about environmental problems, “low levels of water in rivers” and “inadequate water supplies” ranked one and two, with more than half of those polled rating them as extremely or very serious problems. “Pollution of rivers, lakes and streams” wasn’t far behind, ranking fourth.

Since 2011, Colorado College’s State of the Rockies Project has probed public attitudes toward environmental issues in the Intermountain West (see our coverage of the 2017 poll and my interview with one of the pollsters, Dave Metz).

The eight-state survey, which is conducted by a bipartisan team of pollsters, has consistently found strong support for conservation measures, though the questions posed each year have varied somewhat to reflect current trends.

This year’s poll found an increasing number of Westerners identifying themselves as a “conservationist.” 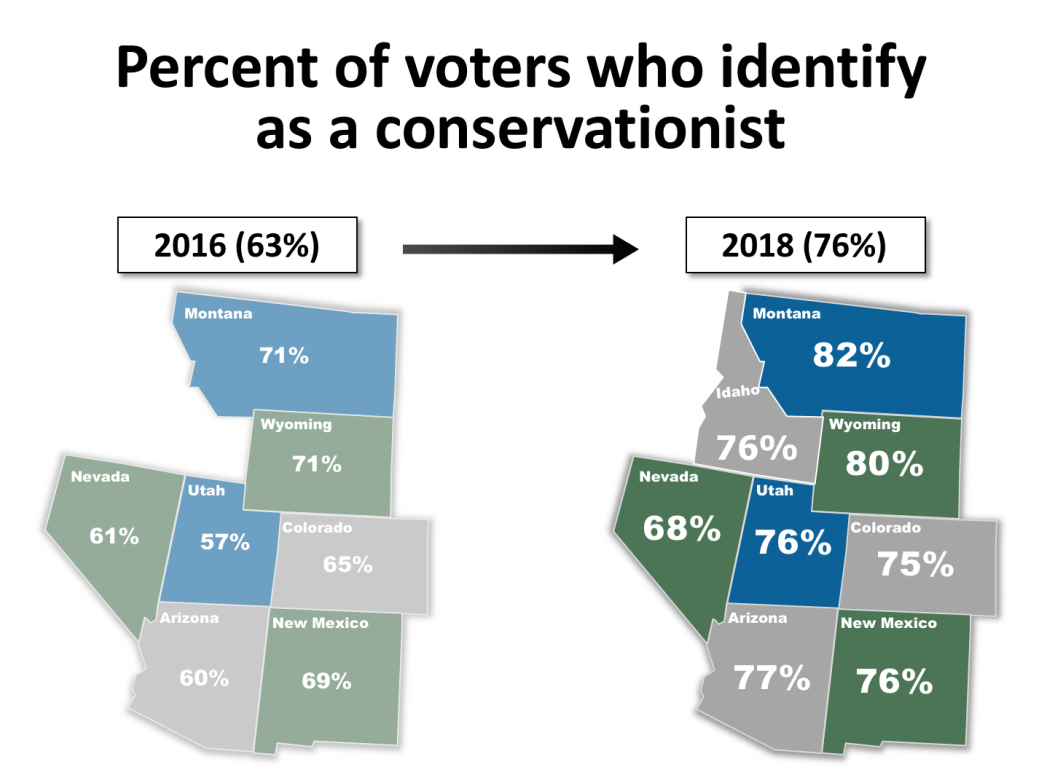 The 2018 poll included many questions on public lands, outdoor recreation, and some recent policy initiatives by the Trump administration. It’s clear from the results that many Westerners not only cherish the region’s signature landscapes and wildlife but also see their connection to rivers, public lands, biodiversity, and outdoor playgrounds as integral to their identities.

“Over the eight-year history of the Conservation in the West Poll, a passion for the outdoors and strong support for American public lands have remained constant in the Mountain West,” said Dr. Walt Hecox, Professor Emeritus of Economics at Colorado College and founder of the State of the Rockies Project, in a release announcing the poll results. “Nearly all of the people surveyed said they visited national public lands in the past year and plan to go to a national park in 2018. Public lands drive our economy and define our way of life. A leadership agenda that does not recognize that reality is going to be met with strong disapproval in the West.”

Below are 7 slides relevant to water issues, taken from the project’s summary of water issues.

1. Water supply problems are the most worrisome issue for Westerners: Befitting a dry region, water supply concerns are paramount in the West. About one-fifth of respondents said low river levels and inadequate supplies were extremely serious problems. Water quality issues are also troubling to residents, with 43% describing water pollution as an extremely or very serious problem.

2. Concern about many environmental issues has increased: Looking at the past few years of surveys, the pollsters noted that some issues have evoked increasing concern, especially wildfires. The percentage of people describing pollution of rivers, lakes, and streams as an extremely or very serious problem increased from 38% to 43% between 2016 and 2018. 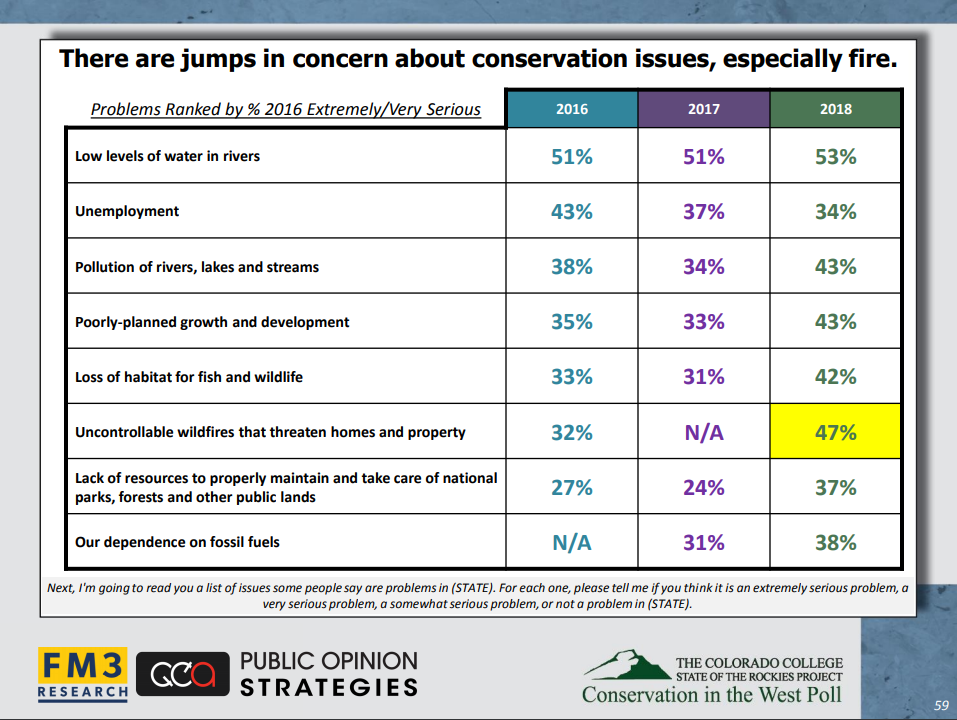 3. Persistent worries about low river levels: As shown below, this is the sixth annual survey in a row to find high levels of worry about low water levels in Western rivers. The numbers have bounced around over the years, with the ebb and flow of the weather in the region probably playing some role. But the data suggest this is issue Westerners see as endemic and not merely due to periodic drought. 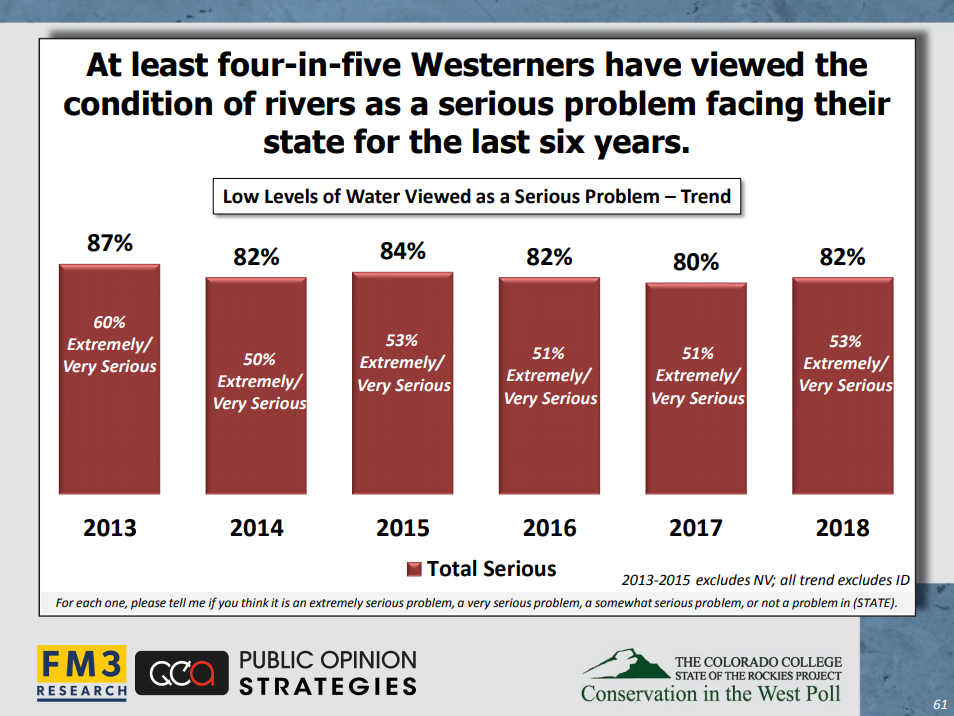 4. Conservation is much more popular than new diversions: As we’ve noted in earlier posts, water conservation is a strategy that polls very well. This year’s Conservation in the West survey found that Westerners prefer using water more efficiently, rather than diverting more water from rivers, by a six-to-one margin. This seems like the logical extension of the point made above: most Westerners think their rivers are already under enough strain and don’t need more water diverted from them. 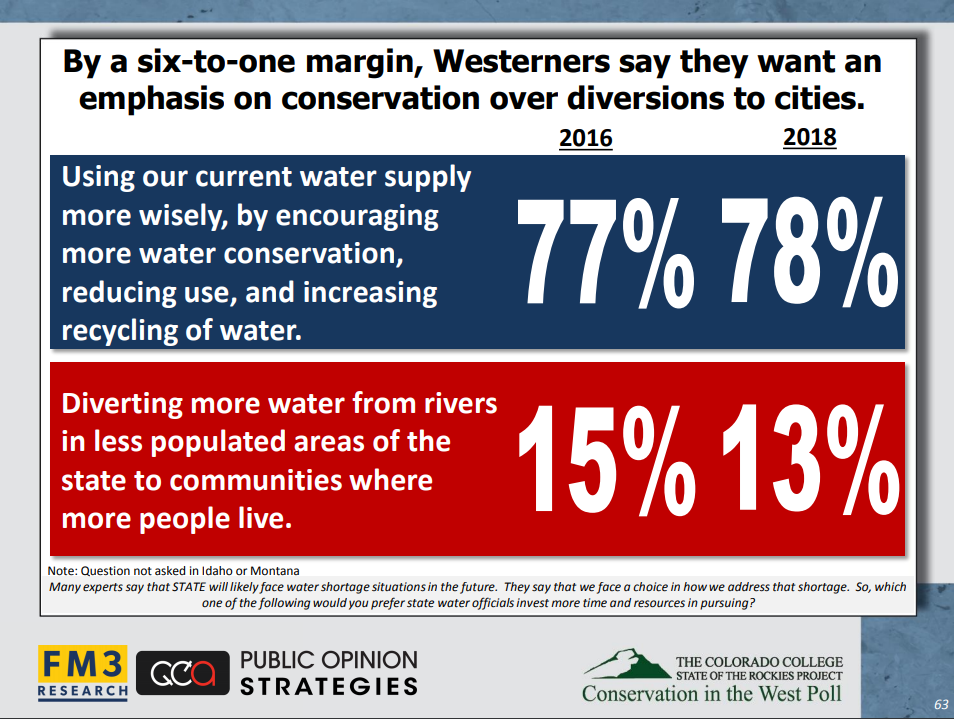 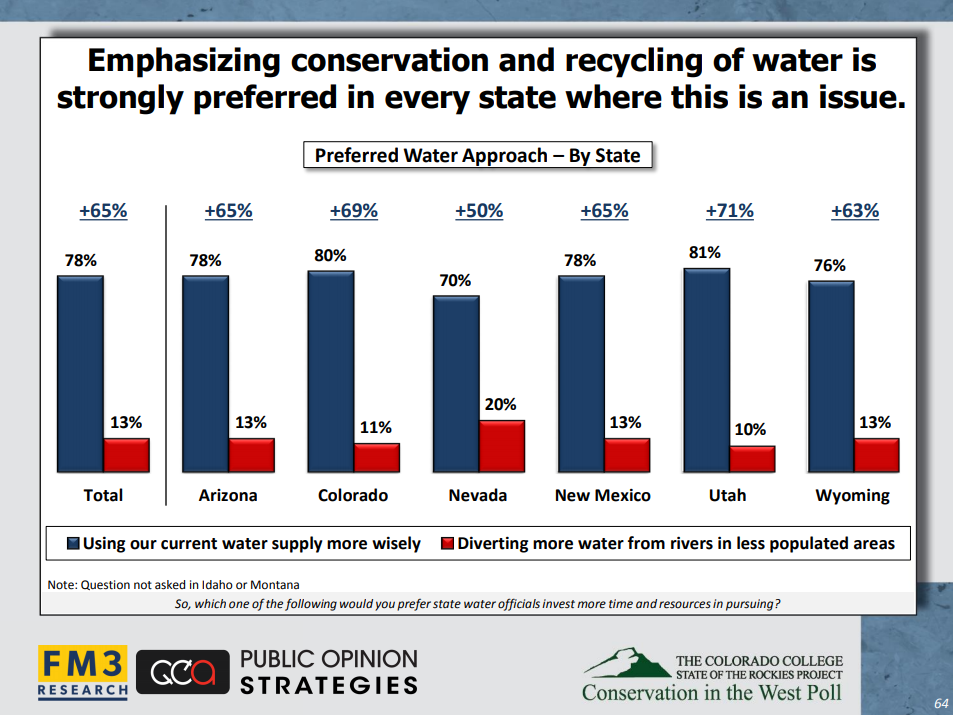 6. Voters think the Colorado River is in jeopardy: Looking at one very important river in particular, respondents expressed deep concern about the Colorado, with about three-quarters describing it as “at risk.” This question was only asked in four of the states. 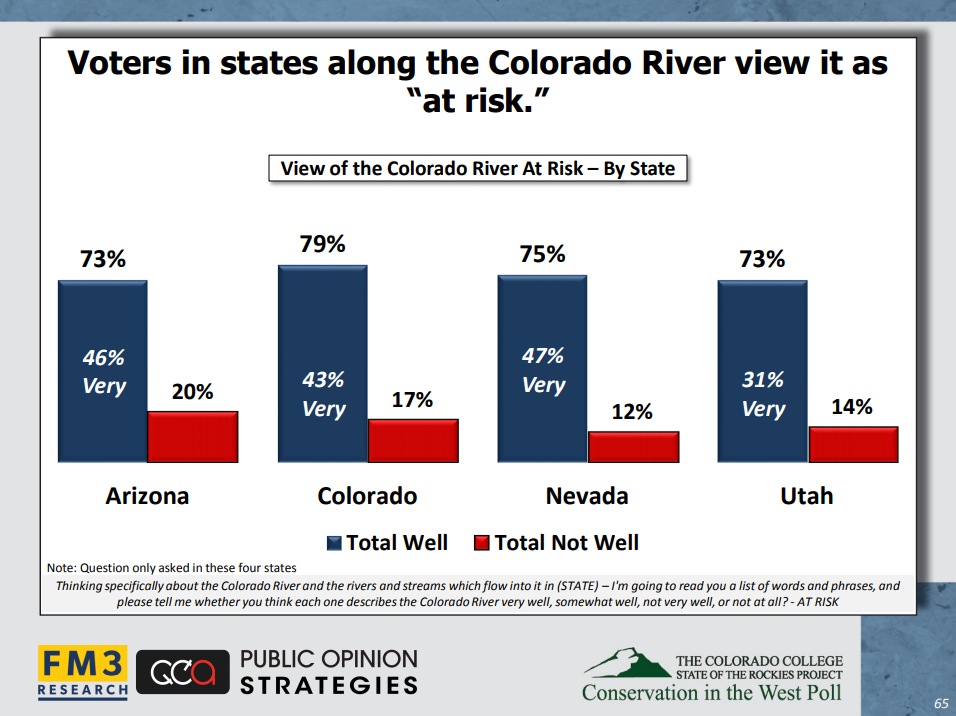 7. Colorado River seen as a lifeblood and national treasure: Why are people concerned about the Colorado River? Three statements earned support from the vast majority of respondents in Arizona, Colorado, Nevada, and Utah: it’s a national treasure, it attracts tourism/recreation, and it’s critical to the economy. 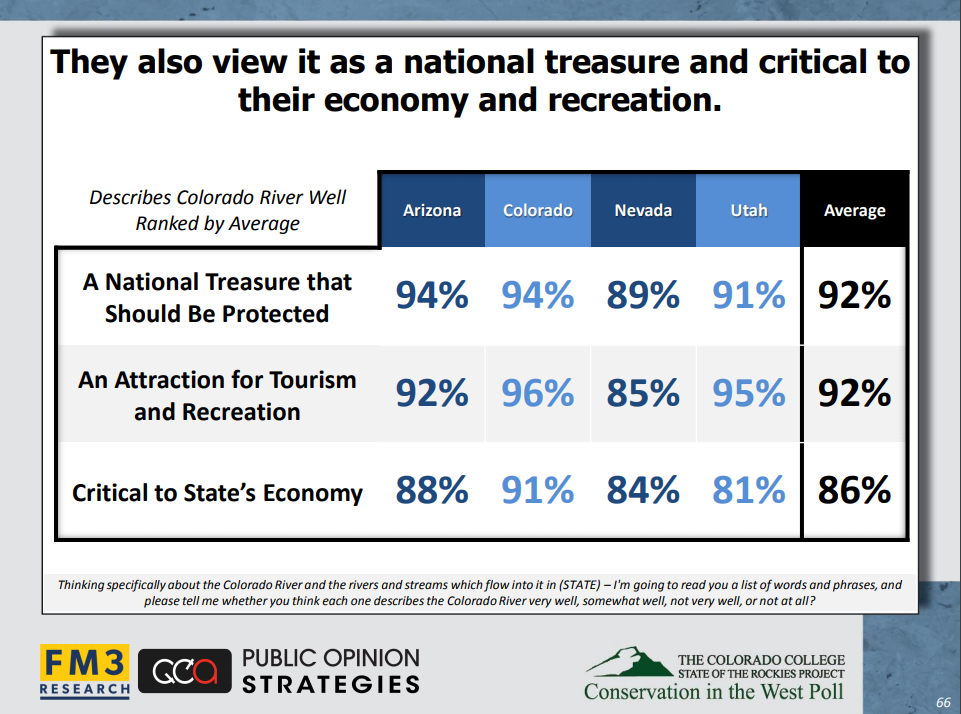 Summary of other findings

Water was just one part of the Conservation in the West poll. Here’s a summary of the other findings, from the project’s press release:

The poll was managed by Lori Weigel of Public Opinion Strategies and Dave Metz of Fairbank, Maslin, Maullin, Metz & Associates. The survey included 3,200 telephone interviews with 400 registered voters in each of eight states: Arizona, Colorado, Idaho, Montana, New Mexico, Nevada, Utah, Wyoming. The interviews were conducted in December 2017 and January 2018. Overall, the survey’s margin of sampling error was +/- 2.65%.