Some people call it “purified water.” Others deride the process of turning wastewater into potable supplies as “toilet to tap.”

Whatever you call it, recycling sewage into drinking water is something we’re likely to see more of as communities look for new sources to support growing populations.

The key challenge for delivering treated effluent to customers isn’t technical: we already know how to remove the impurities and contamination.

The bigger obstacle for this approach is public opinion: how do you sell and communicate about something that makes many people squeamish?

Public acceptance of recycled water has been the subject of a number of polls. In a January 2015 paper in the journal Judgment and Decision Making, researchers reported results from two surveys: one from a sample of more than 2,000 Americans from five metropolitan areas–Phoenix, San Diego, San Jose, Eugene, and Philadelphia–and the second from a smaller sample of undergraduate students.

“Approximately 13% of our adult American sample definitely refuses to try recycled water, while 49% are willing to try it, with 38% uncertain,” the researchers wrote. “Both disgust and contamination sensitivity predict resistance to consumption of recycled water.” The graphic below (click on image to enlarge) shows the respondents’ willingness to try various types of water, ranging from the seemingly pristine bottled spring water to various types of treated water and, at the bottom of the barrel, raw sewage. 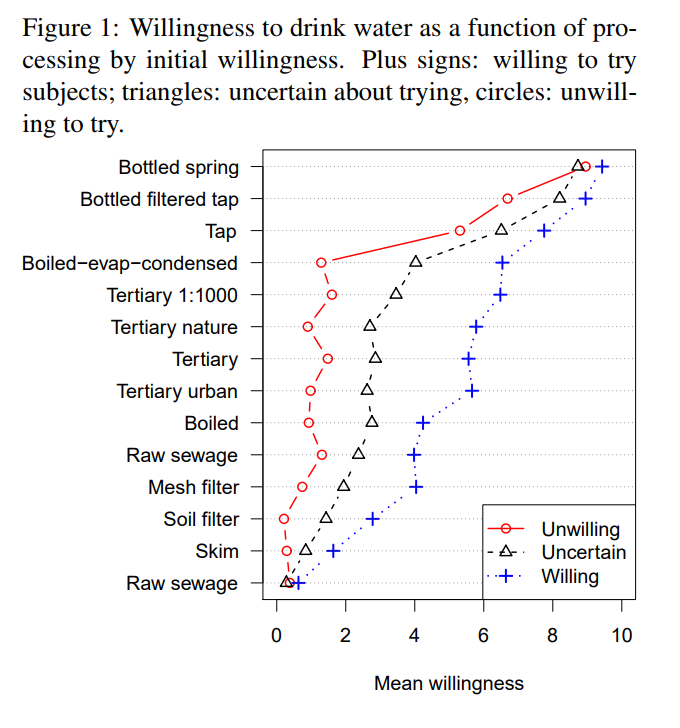 In March 2016, water technology firm Xylem released results from an online poll of Californians that asked whether residents approved of using recycled water as a long-term solution for managing water. Nearly half of the respondents (49%) said they were very supportive and 38% said they were somewhat supportive. The poll also found that 42% of Californians were willing to use recycled water in their everyday lives and another 41% said they’re somewhat willing.

Below is an infographic from the survey that summarizes the results:

Public education is a critical part of any strategy to increase the use of recycled water. When respondents in the Xylem survey were read a statement explaining the treatment process, 89% said they were more willing to use recycled water. Similarly, 88% said seeing a demonstration of the purification process would make them more comfortable using and drinking recycled water.

What to call recycled water is a communications challenge for supporters of the technology. Treated wastewater doesn’t thrill most people, and few outside the water world know what “effluent” is. The Xylem poll found that the term “purified water” was a bit more likely to trigger support (90%) than “recycled water” (87%) or “reclaimed water” (82%).

Results from polls in Bay Area and San Diego

The Xylem poll is based on a California statewide sample, but other studies have focused on much smaller geographies. In 2015, for instance, the Bay Area Council polled residents of the San Francisco Bay region on a variety of water issues and found that 88% supported the use of recycled water. The graphic below shows how other drought preparedness strategies fared. 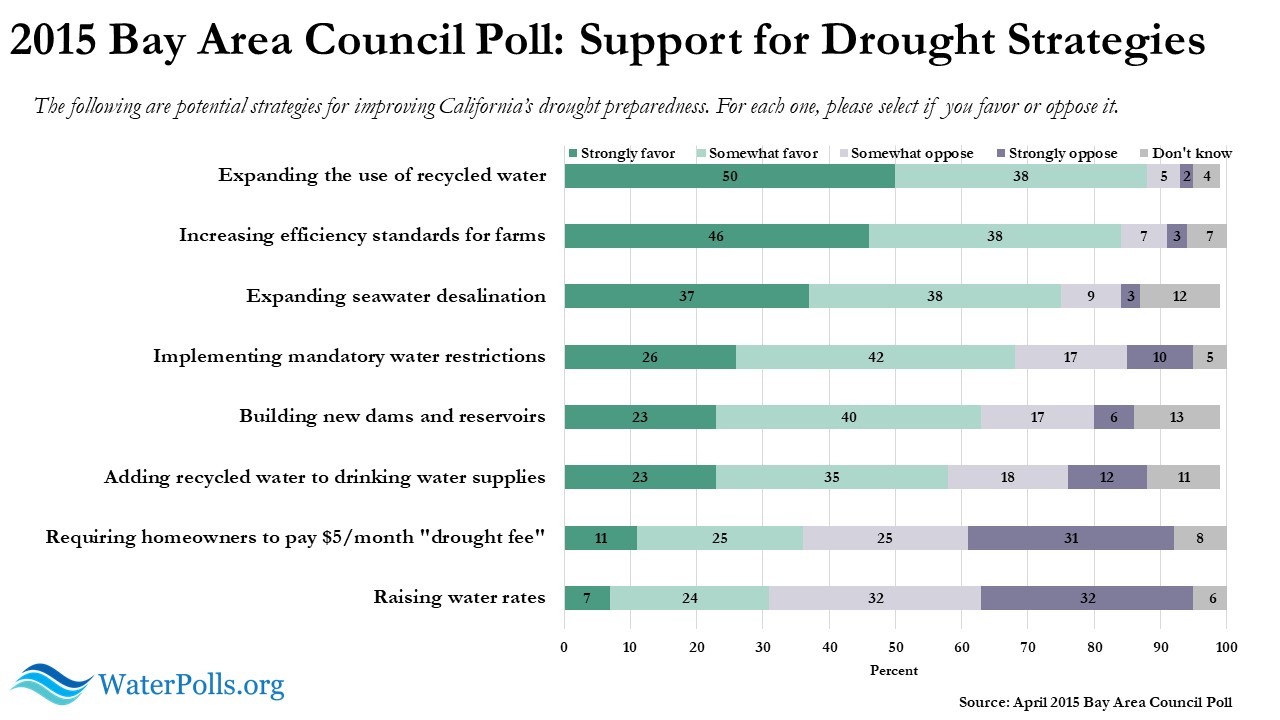 The San Diego County Water Authority has done extensive polling on water issues and asked some questions about treating recycled water. As shown in the graphic below, about six in 10 respondents said they favored mixing recycled water into the existing supply, with men expressing greater support than women. Of the 31% of people against the idea, about half strongly opposed mixing in the recycled water. 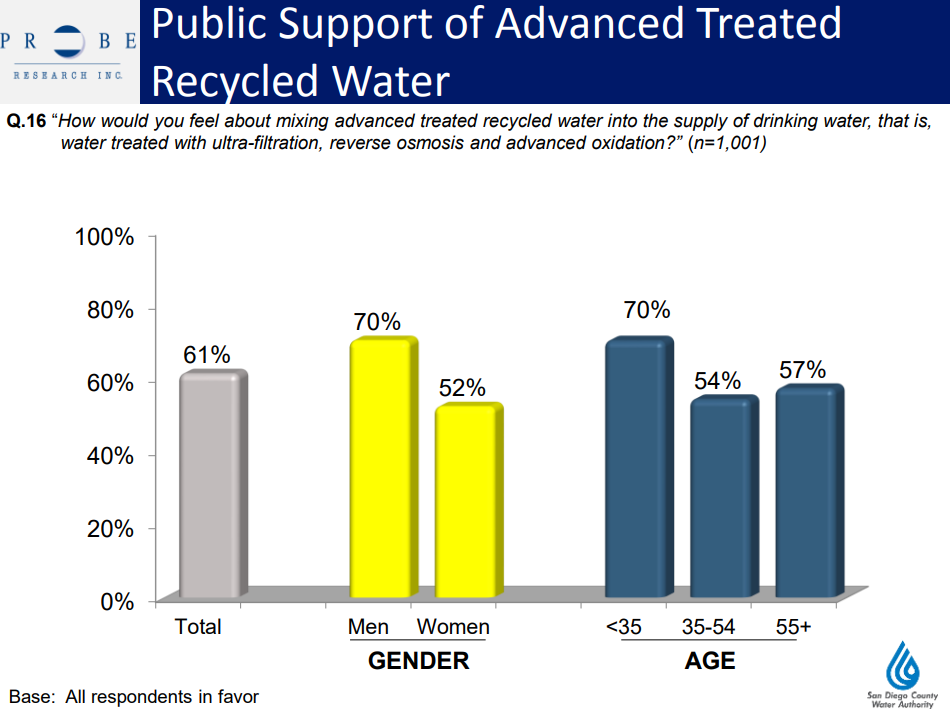 Oregon survey: type of use matters

A 2008 survey of voters in Corvallis, Oregon concluded that “the city can expect significant support for water reuse in the community, especially if the program demonstrably adheres to the principles of sustainability.” This survey found that how recycled water is used plays a big role in influencing public acceptance.

“Low contact uses like irrigation of business park landscaping were more preferred than high contact uses like irrigation of edible crops,” wrote researcher Karen DuBose. “There is significant uncertainty among respondents about the safety of reclaimed water for all uses listed in the survey. Given more information, citizens may be more willing to support higher contact uses.” The graphic below shows that in Corvallis, acceptance varied from 89% supportive of irrigating business park landscaping with recycled water to only 33% in favor of irrigating edible crops. 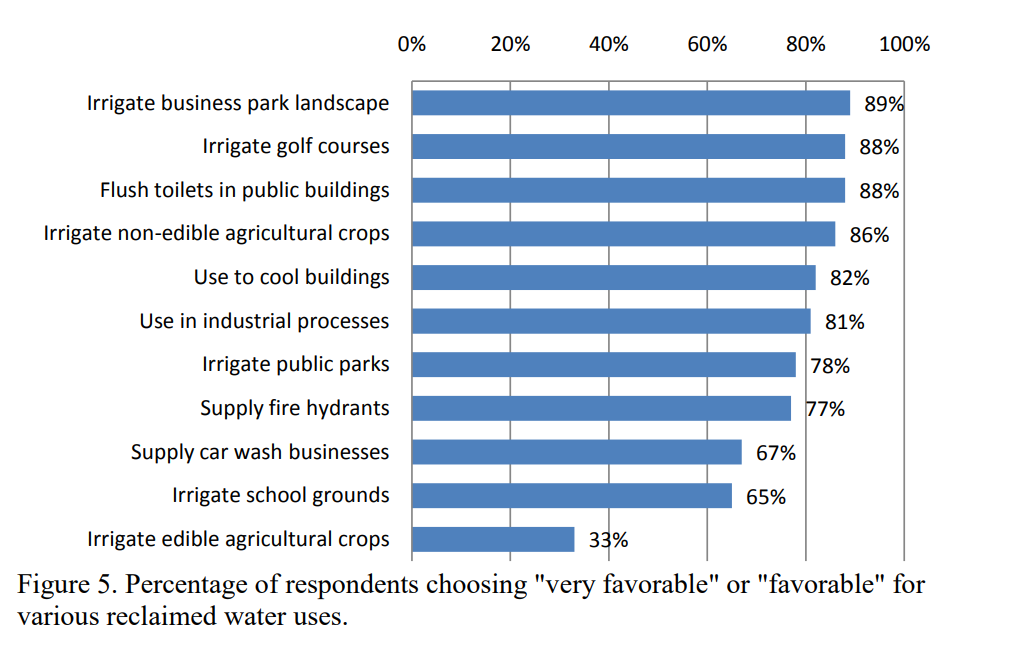 Messengers are crucial in any communications campaign and the Corvallis poll found that university professors–especially those from the hometown Oregon State University–were rated the most credible sources of information on the use of treated wastewater. 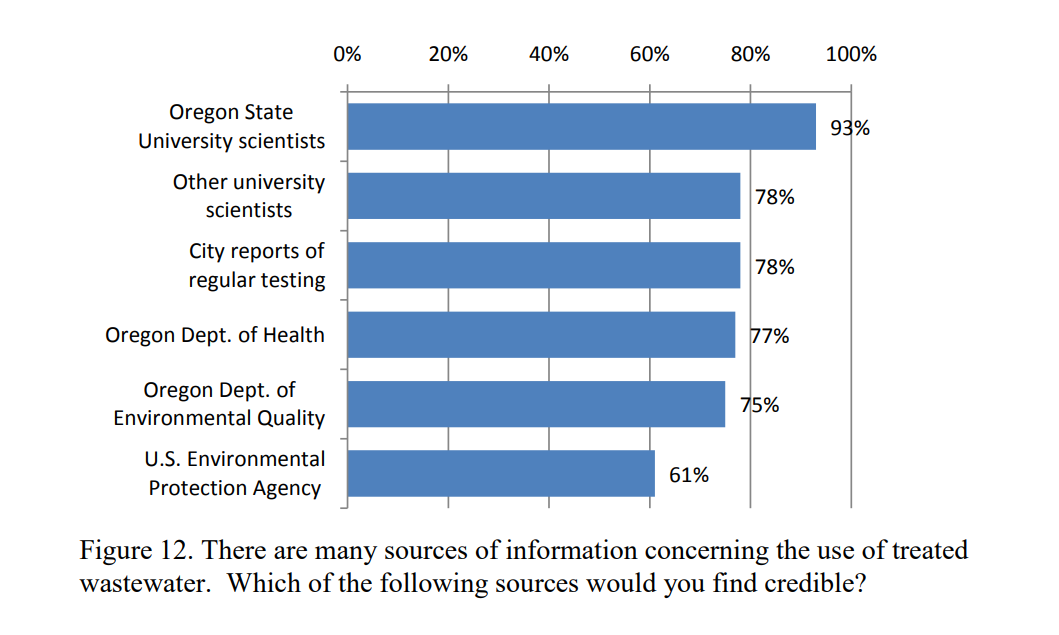 The decision to use recycled water is usually made at the local level, so much of what we’ve learned so far from polling on the issue is narrowly focused on smaller geographies. Looking across the polls, there appears to be decent support among the public for using more treated wastewater, but also some hard-core opponents. The details of any recycled water proposal are apt to matter greatly: how the water is treated, what it’s used for, and even what it’s called will all shape public opinion on the technology.