Americans say contaminated water is as serious a health problem as heroin abuse, according to an April 2016 survey by the Kaiser Family Foundation.

As part of its longstanding Health Tracking Poll, the Kaiser Family Foundation asked Americans to rate a series of health issues facing the nation. Pollsters found that heroin abuse and water pollution ranked slightly behind cancer as the most serious health problem confronting the country. 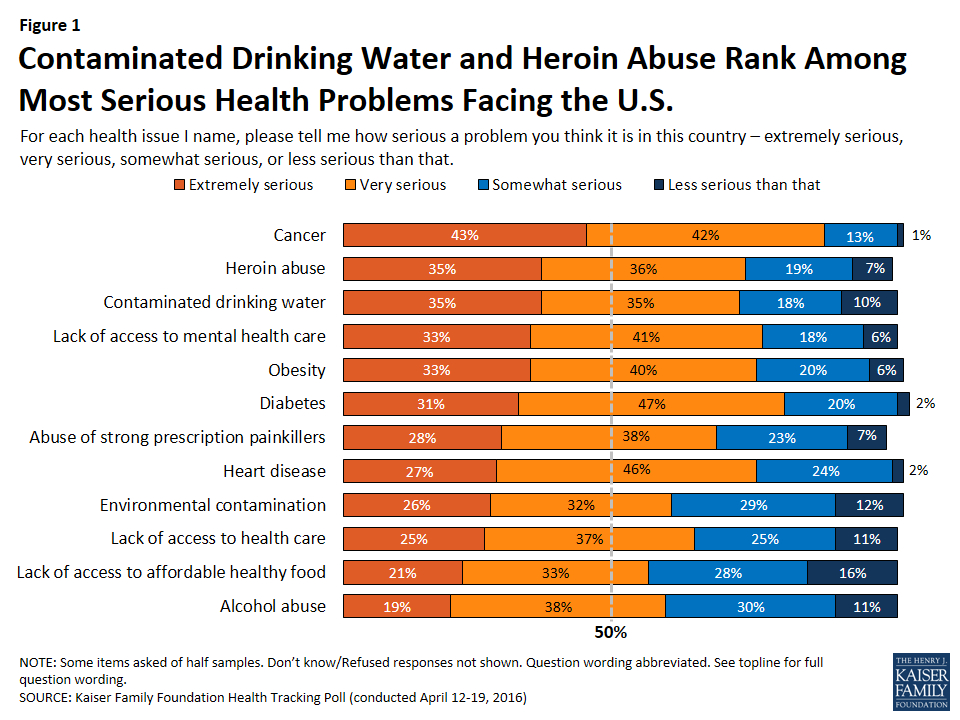 As the researchers note, the poll was taken “in the midst of news stories about the contamination of the water in Flint, Michigan,” so that coverage likely influenced the findings, as did media attention to heroin abuse.

I found the Kaiser survey’s focus on water and health to be refreshing. Questions about water-related public opinion are frequently embedded in “environmental” polls. While the environment is an inescapable element of water issues, that framing can obscure the many ways in which water affects other issues, such as the economy, agriculture, food, and public health.

The Kaiser poll also asked Americans to rate the state and federal governments on their job of protecting public drinking water. The graphic below shows that states get higher marks than the feds, but it’s not exactly a straight-A report card. Only 17% of those surveyed gave their state government an excellent mark, while 37% rated the performance as good and 45% said it was either fair or poor. By contrast, the federal government earned excellent or good ratings from only 36% of respondents, while 62% said it was doing a fair or poor job. 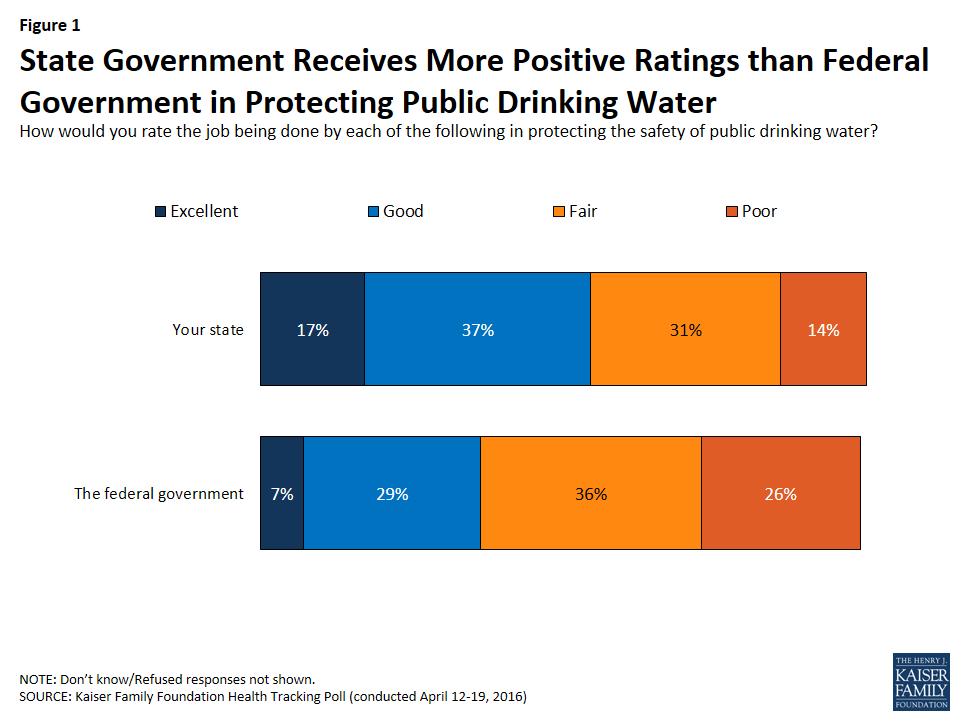 Kaiser found that Americans have some confidence in their state government’s ability to ensure the safety of public services, including public water supplies, public sewer systems, and the electricity system. The graphic below shows that nearly half of Americans are “somewhat confident,” but between 15% and 23% of the public are “not at all confident” about their state’s ability to ensure the safety of public services over the next 5 years. On the one hand, that’s a relatively small percentage of people with a no-confidence vote; on the other hand, the question only asked about next five years, which is a short time horizon in which to envision a problem. 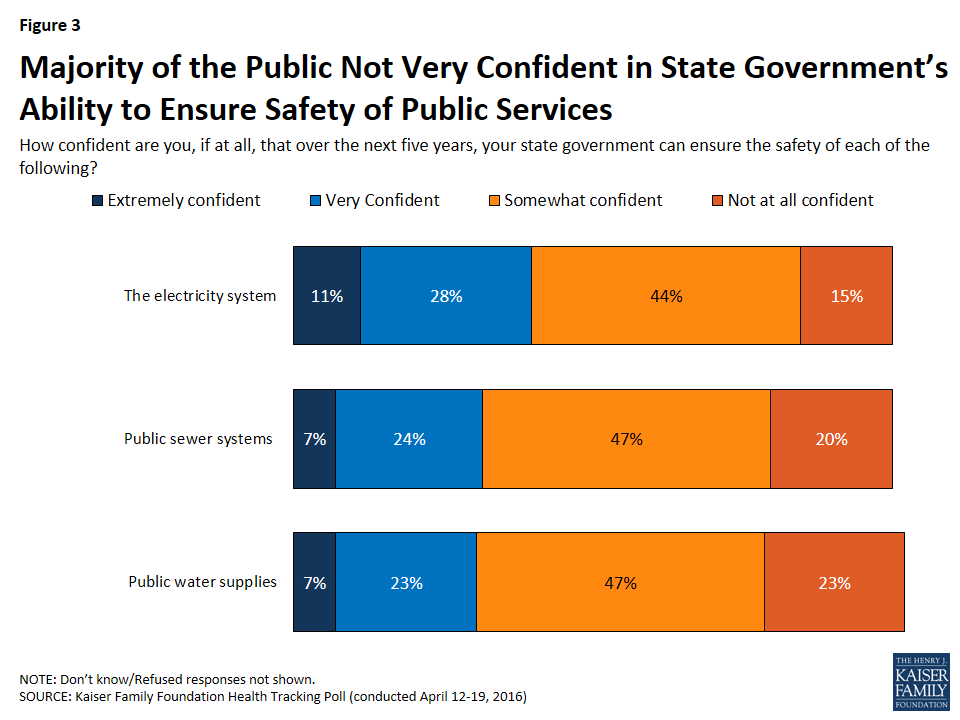 Kaiser also reported that women are less confident in their state’s handling of public utilities, including sewer and water supplies, as shown in the chart below. “These findings are consistent with other indicators suggesting that women care more about health-related issues than men,” according to the Kaiser researchers. 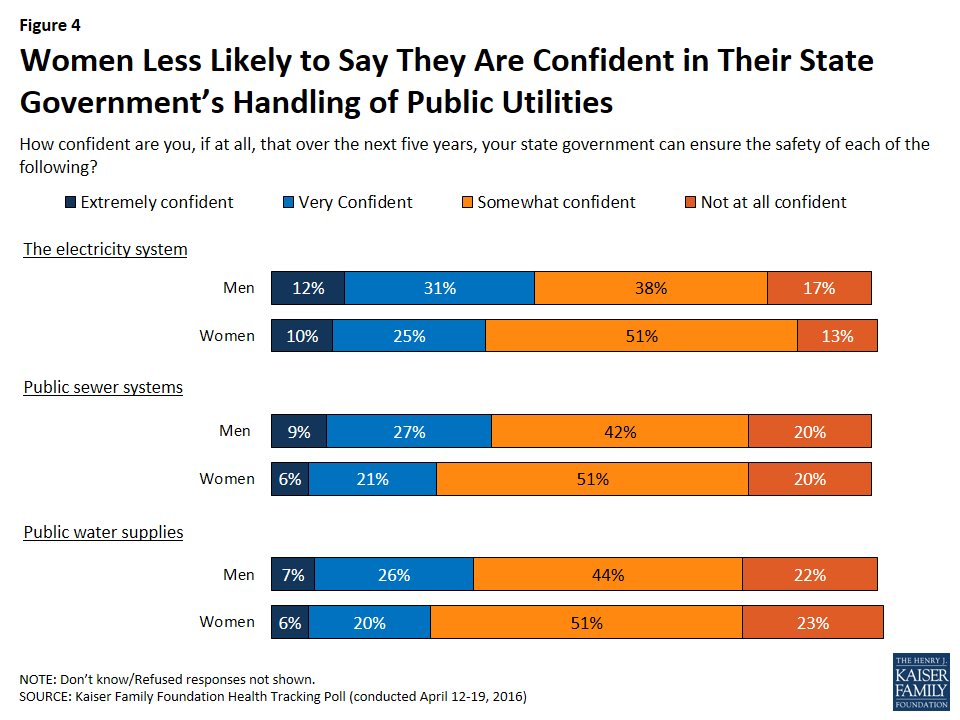 The pollsters used some statistical techniques to predict how different regions would rate their state’s performance on protecting drinking water. The graphic below summarizes the results and shows that Midwestern residents were the most negative, with 52% rating their state as fair or poor. Westerners were the most positive, with 39% responding fair or poor. 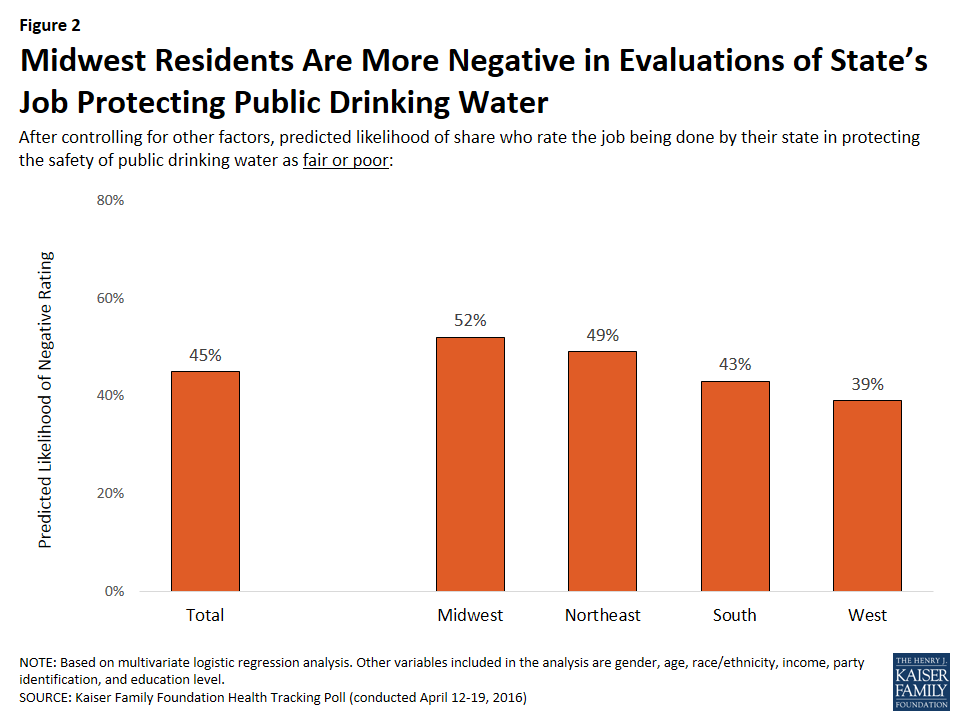 Why was the Midwest so negative? Once again, the experiences in Flint, a Midwestern city, may be influencing the findings, according to the pollsters.

I played around with Kaiser’s helpful “question finder” to see if there were other water-related questions in its polling history, but it looks like these questions haven’t been repeated since April 2016 and weren’t asked before then. It would be interesting to see if these results changed, now that the White House has changed parties and Flint is receiving less media attention.