A new survey sponsored by Nestlé Waters North America has found 66% of U.S. consumers think their own community’s water supply is at risk and 71% believe climate change is impacting access to clean water.

The May 2016 survey, conducted by market research firm PSB, not only polled thousands of American adults but also sought the opinions of 375 water experts from government, academia, NGOs, and utilities.

“The takeaways from this study are clear to us: Americans care deeply about the state of their drinking water, and they believe investments in infrastructure and innovation are needed now,” said Nelson Switzer, Chief Sustainability Officer at Nestlé Waters North America, in a press release.

Below are some of the key points that I pulled from a set of slides summarizing the results (click images to enlarge). You can also download more of these images on our data page, or consult the original source.

1) Americans think clean water is our most precious natural resource

The survey asked respondents about the importance of various natural resources in their daily lives. Clean drinking water came out on top, with 87% of consumers and 94% of water experts describing it as “very important.” That put clean water just ahead of clean air among both consumers and experts–and far above renewable and fossil energy resources. 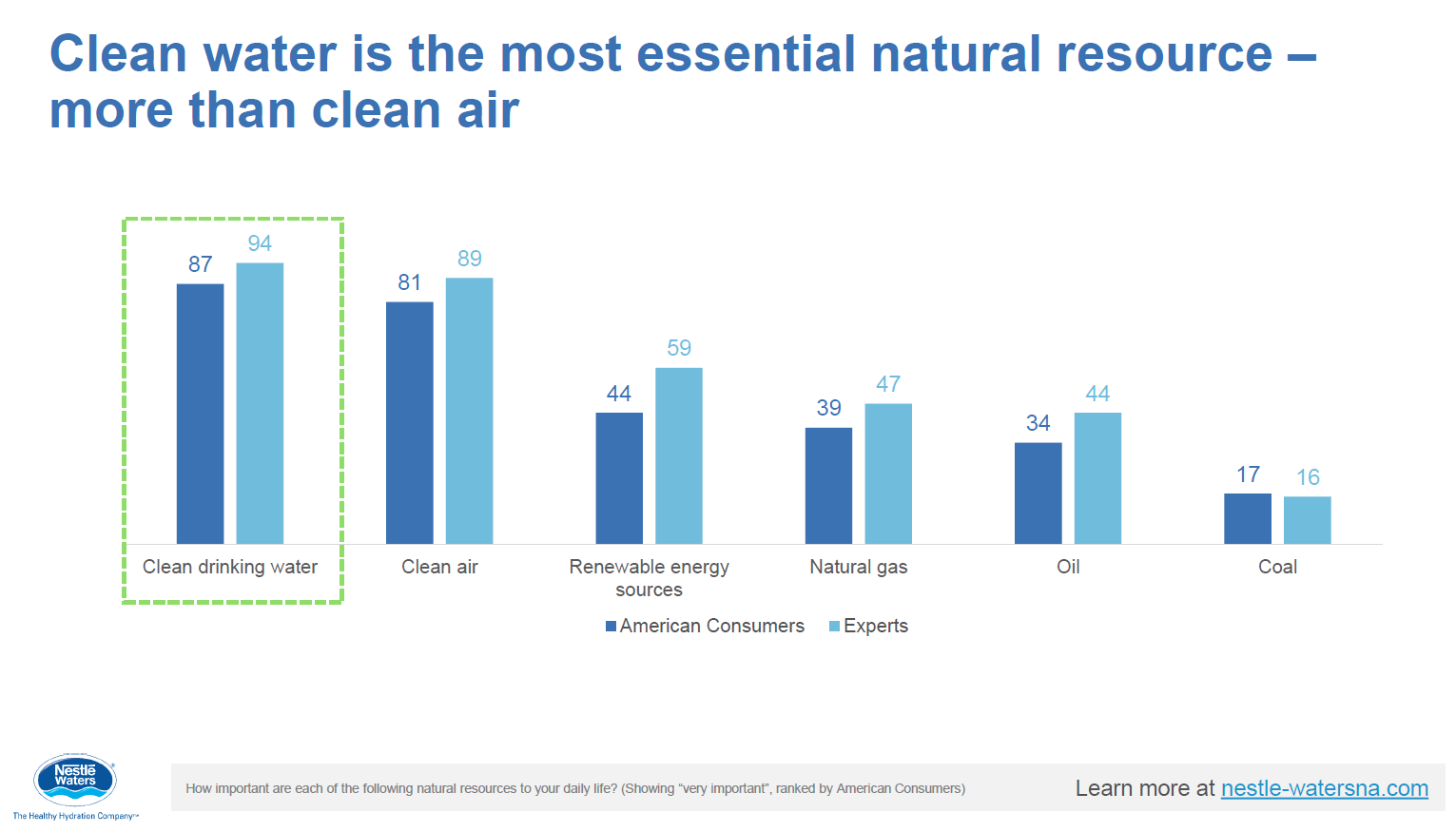 2) Most consumers and experts say water problems are a major issue, if not a crisis

When asked to rate the severity of U.S. water problems, 53% of U.S. consumers say they’re a “major issue” and another 8% describe them as a “crisis.” Among water experts, there were similar views: 57% think the problems are a major issue and 9% say they’ve risen to the level of a crisis. Fewer than 4 in 10 consumers and experts believe water problems are a “minor issue” or “not an issue at all.”

Thinking about their own community’s water supply, 66% of American consumers and 60% of experts say it’s “at risk of experiencing water issues.” For a majority of Americans, water problems aren’t an abstract issue but something they fear could impact their own lives. Four in 10 Americans “question whether the water is clean and safe” in U.S. schools and 36% have those doubts “when I turn on the tap in my home.” 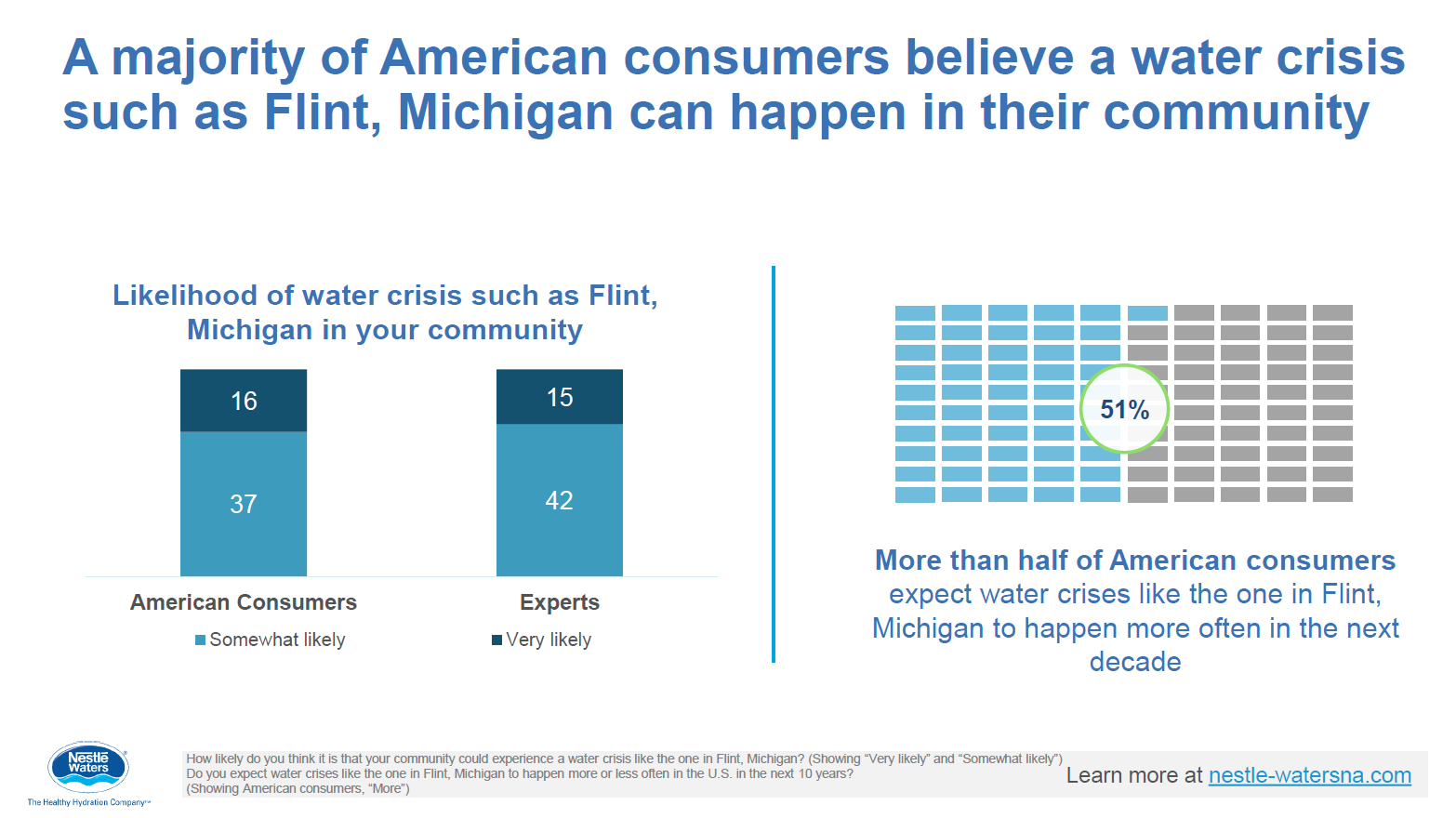 3) Many consumers and experts worry about future of water supply

Looking forward, more than 4 in 10 consumers and experts believe that clean drinking water will be less available in the next 10 years. Even more people think clean air will be harder to come by in a decade. 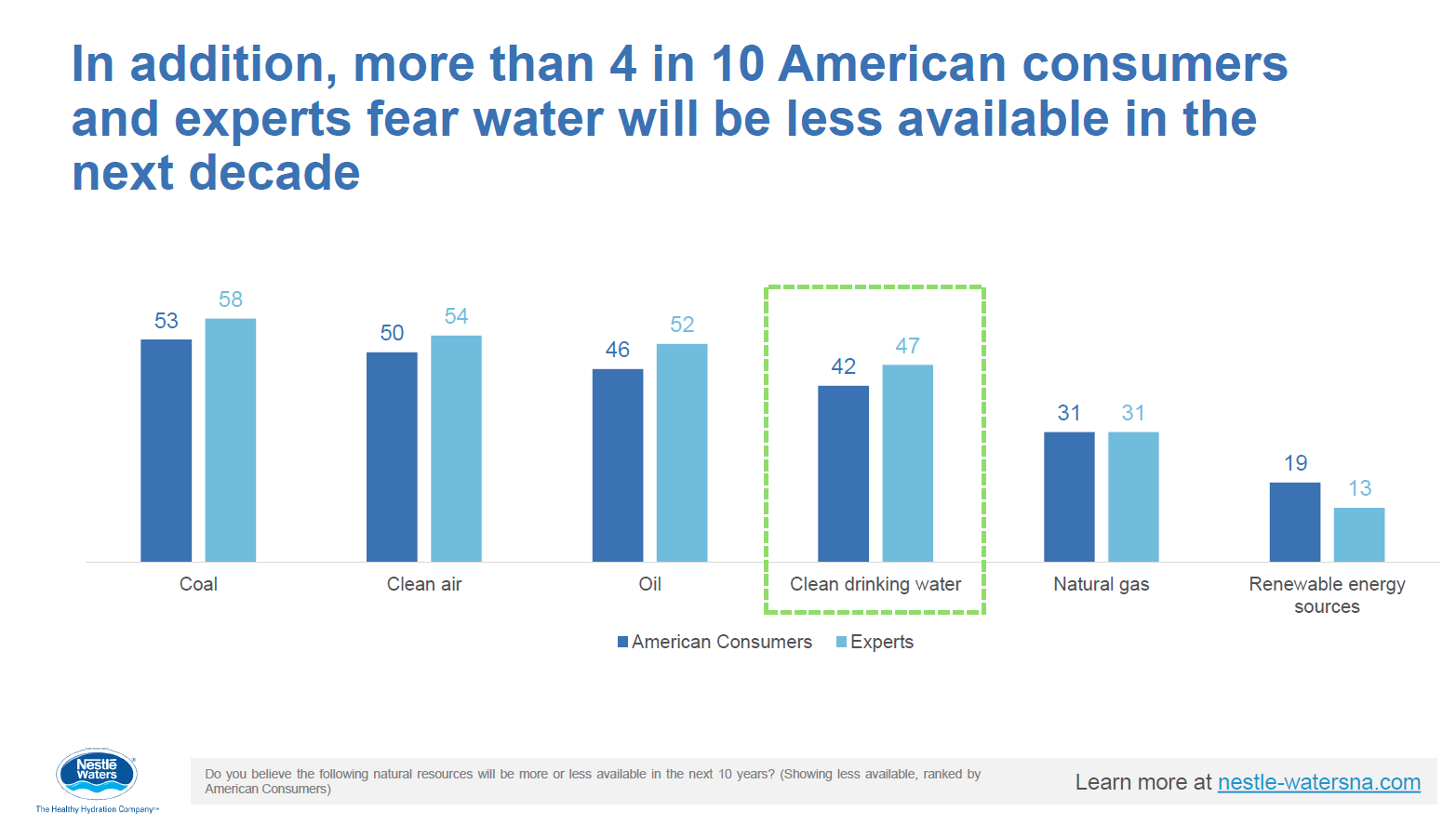 The majority of Americans think climate change is already impacting clean water. Looking at the decade ahead, 51% of American consumers and 58% of water experts say that climate change’s impact on the availability of clean water will increase. When asked how climate change is affecting clean drinking water, 41% of consumers cited impacts to the quantity of water and 38% pointed to quality issues. The results were slightly different among experts: 47% said quantity and 33% said quality. 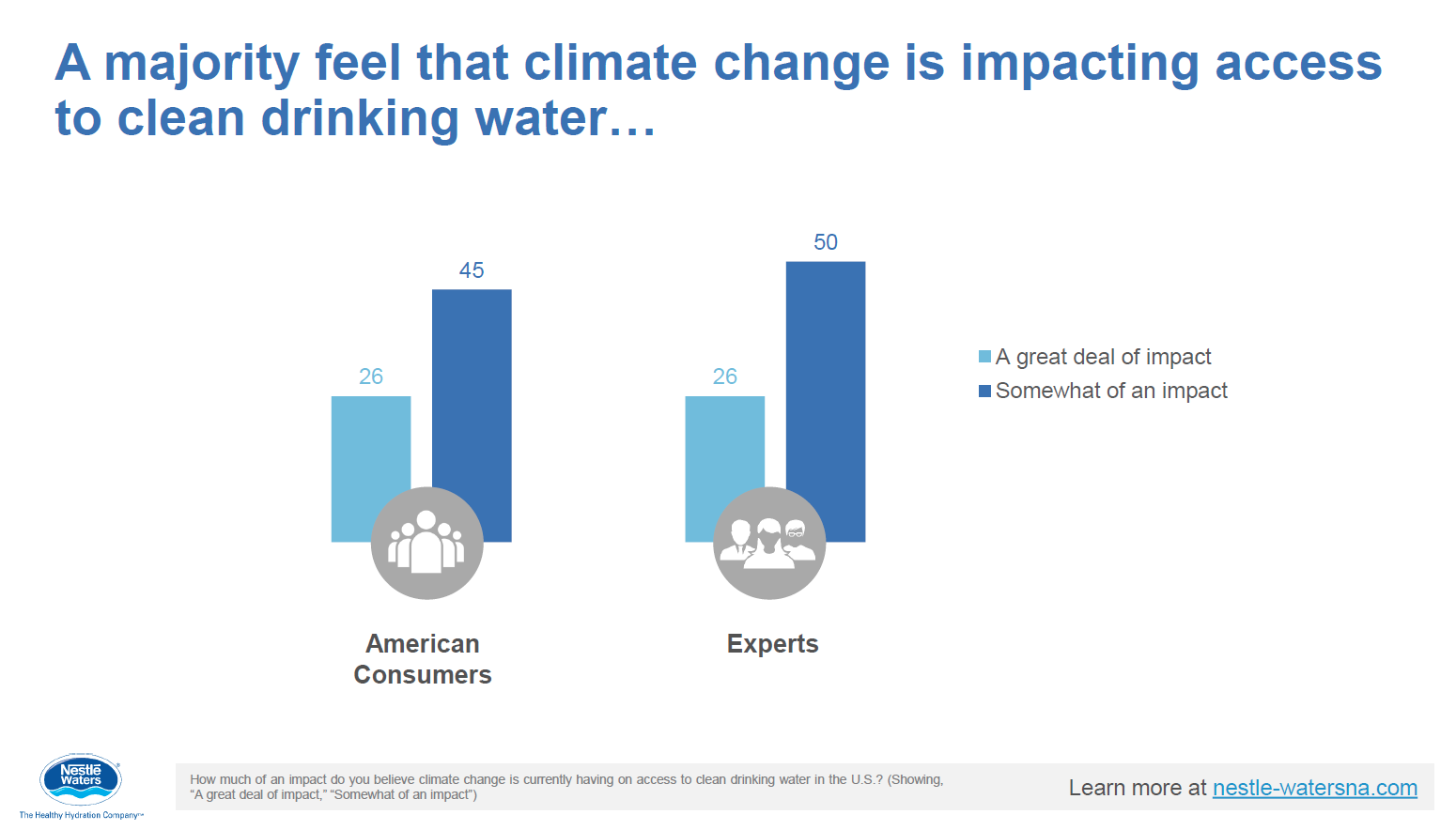 Turning to solutions, the poll found strong support among both the public and experts for improving water infrastructure and “developing innovations for purifying water” in order to cope with climate change. Among the public, there was somewhat less support for attacking the root of the problem–reducing greenhouse gas emissions–than was expressed by experts. 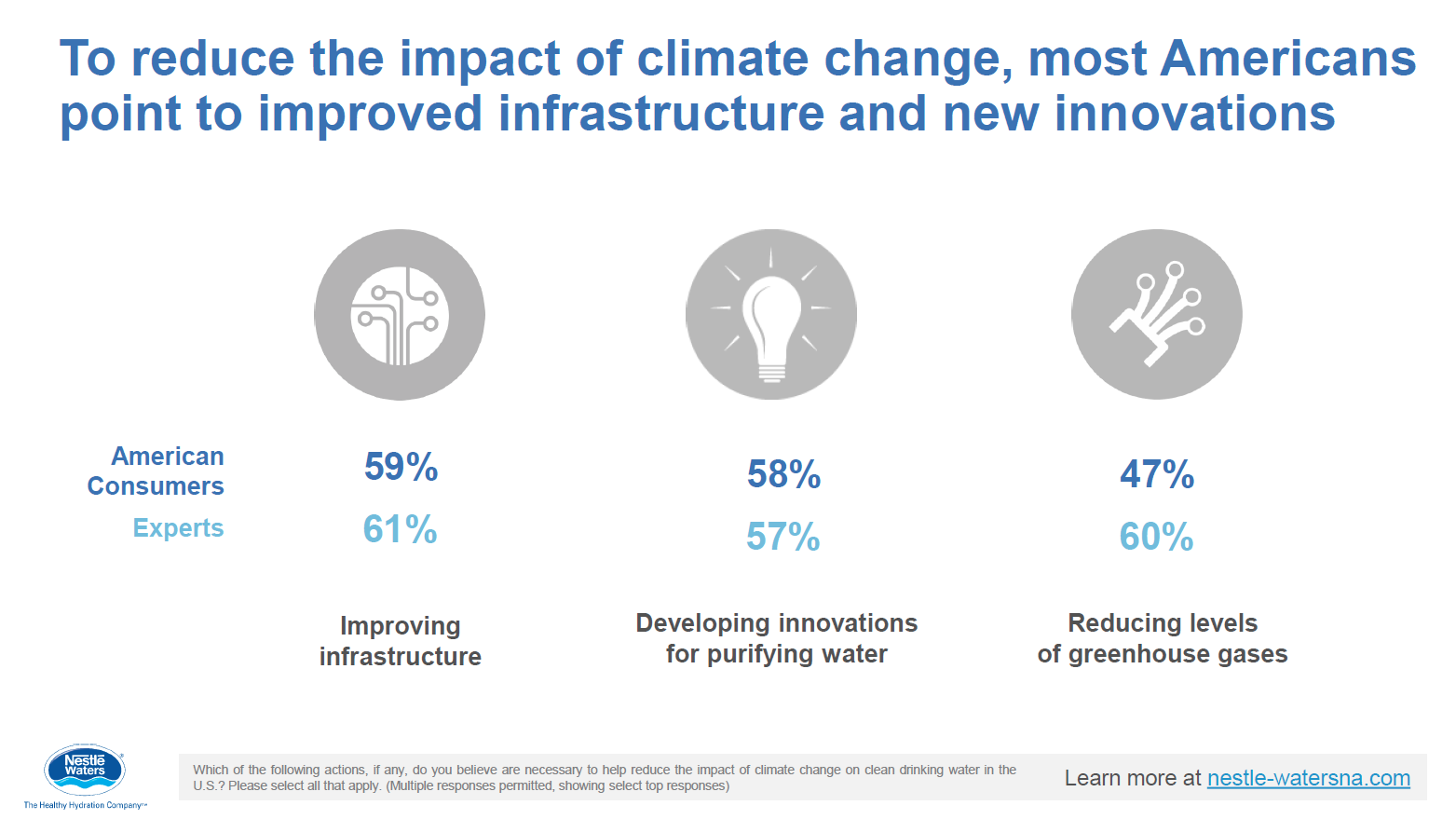 The researchers also asked consumers and experts about what issues are confronting the nation’s water works. Above all, people worry about the age of the system and contaminants in the supply. As shown below, respondents also cited a number of other problems. Interestingly, public opinion wasn’t too far off from expert opinion on these matters. 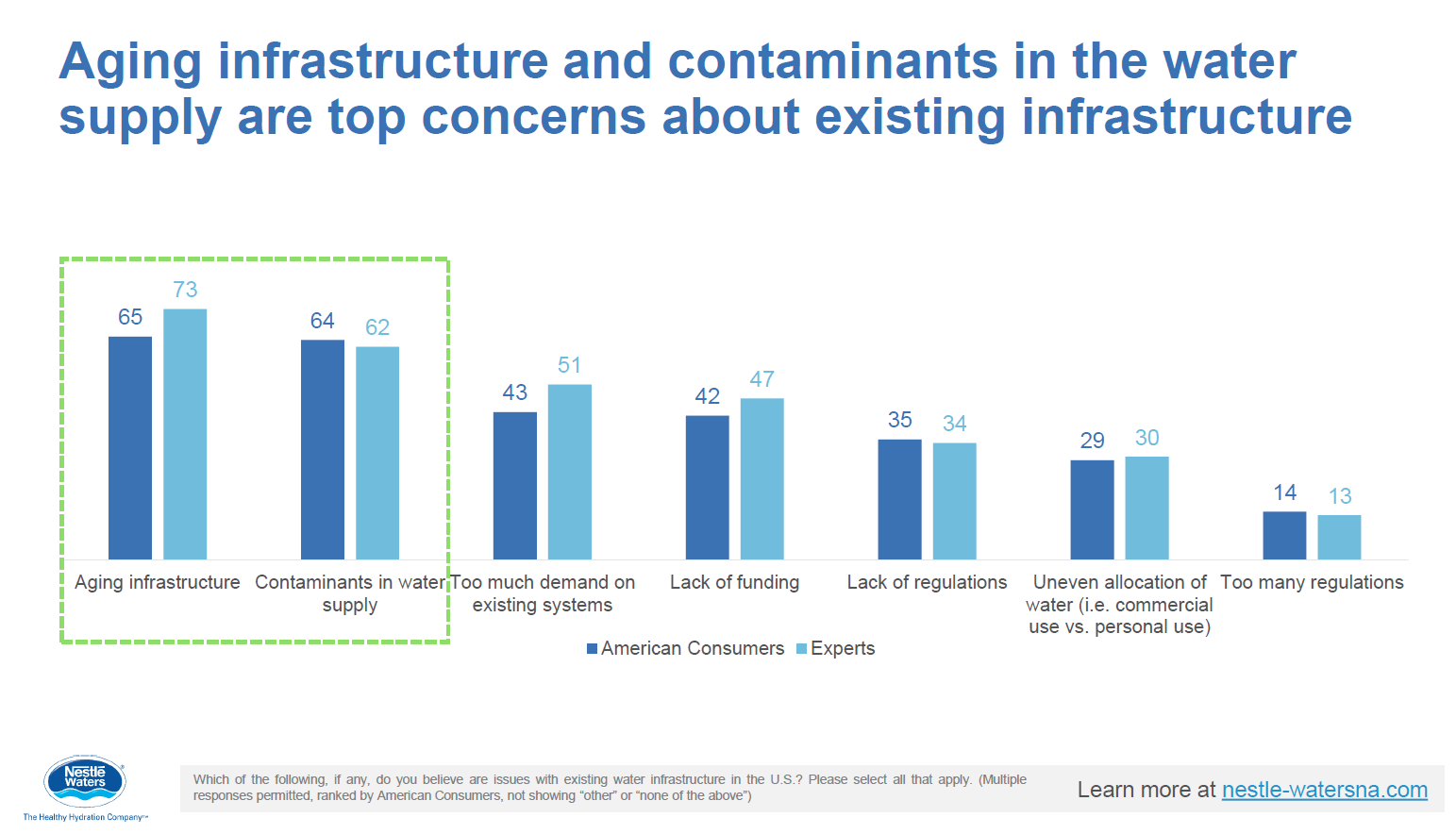 The poll also found a majority of the public and experts favor a major overhaul of water infrastructure, rather than incremental improvements. When asked about which entities are responsible for providing clean water, respondents were most likely to cite various levels of government, but many people also said that businesses and consumers have important roles to play. 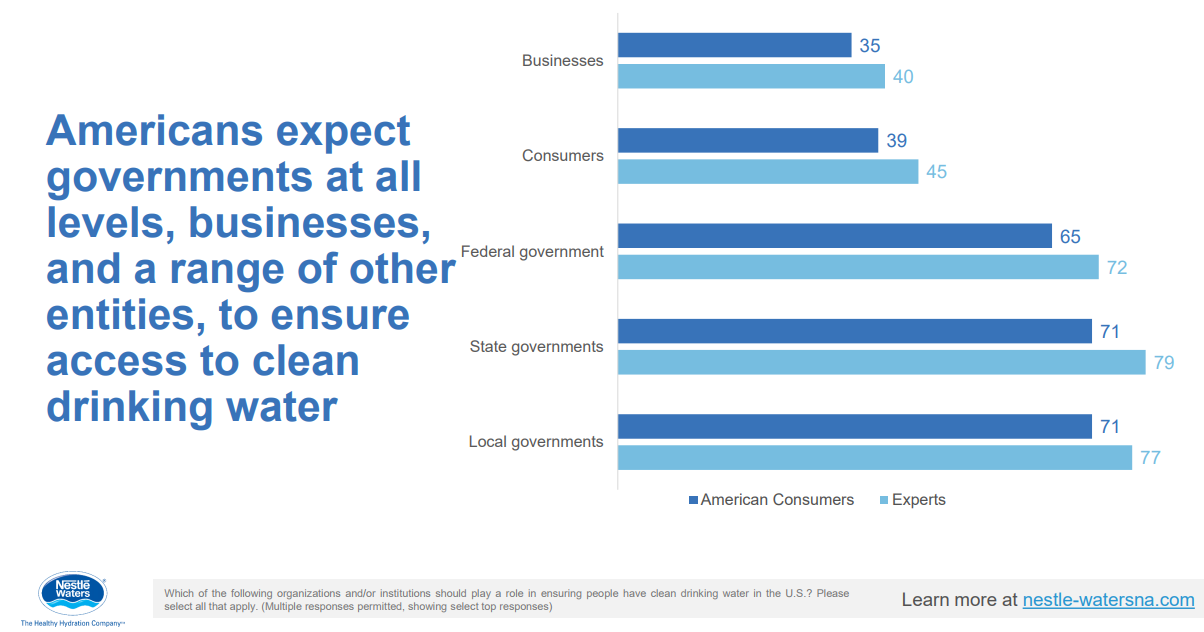 The slide below explains how the surveys were conducted: 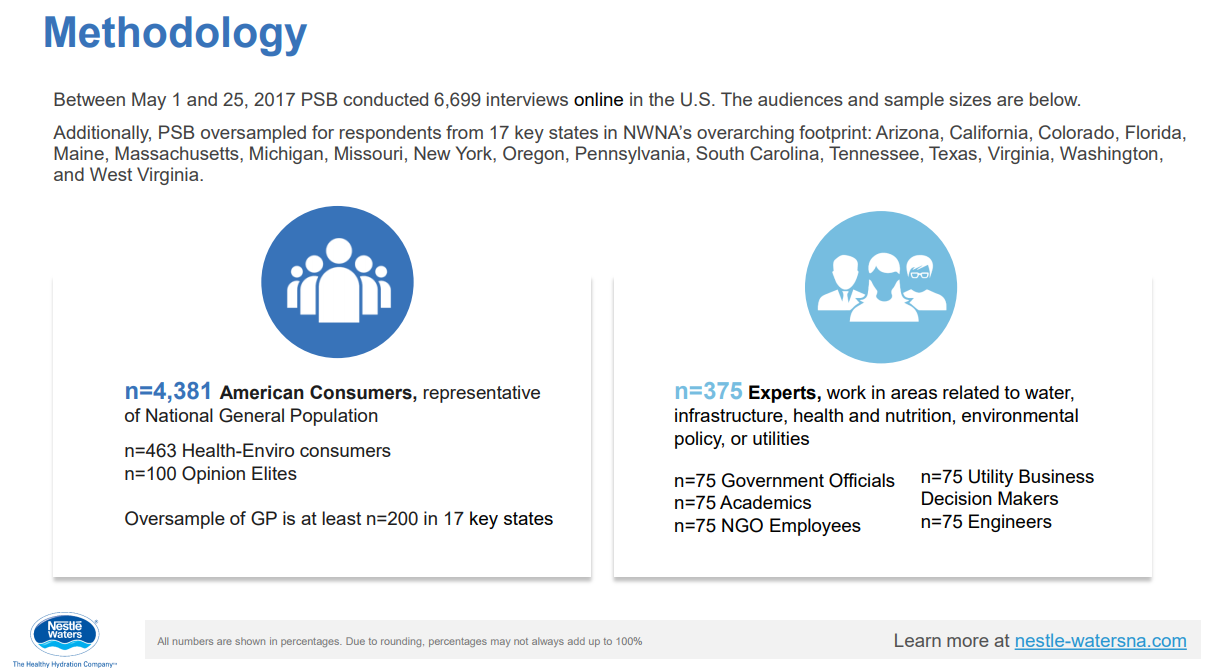