Nearly half of Americans are “water savvy conservationists”

Nearly half of Americans are “water savvy conservationists”

Researchers at the University of Florida have classified Americans into three buckets, so to speak, when it comes to outdoor water conservation.

In bucket number one are the “water savvy conservationists” who are most likely to be miserly in their outdoor irrigation. They adopt practices such as calibrating their sprinklers to be efficient, removing water-hungry plants, and employing rain barrels to collect water. Using national poll data and statistical techniques, the researchers estimate 46% of the public falls within this category.

In bucket two is the “water considerate majority,” which accounts for 44% of the population. These individuals take some actions to reduce their outdoor watering, but they could still be doing more to curb their irrigation, which accounts for majority of household use in some arid parts of the country.

Finally, in bucket three, are the 10% of Americans who simply aren’t concerned with outdoor water conservation.

The research, published recently in the Journal of Agricultural Education, is based on a survey of 1,052 adults.

Using data from the paper, I’ve created the graphic below (also available as an interactive on my Tableau Public page) to summarize how these three groups differ in their self-reported behaviors (click graphic to enlarge). 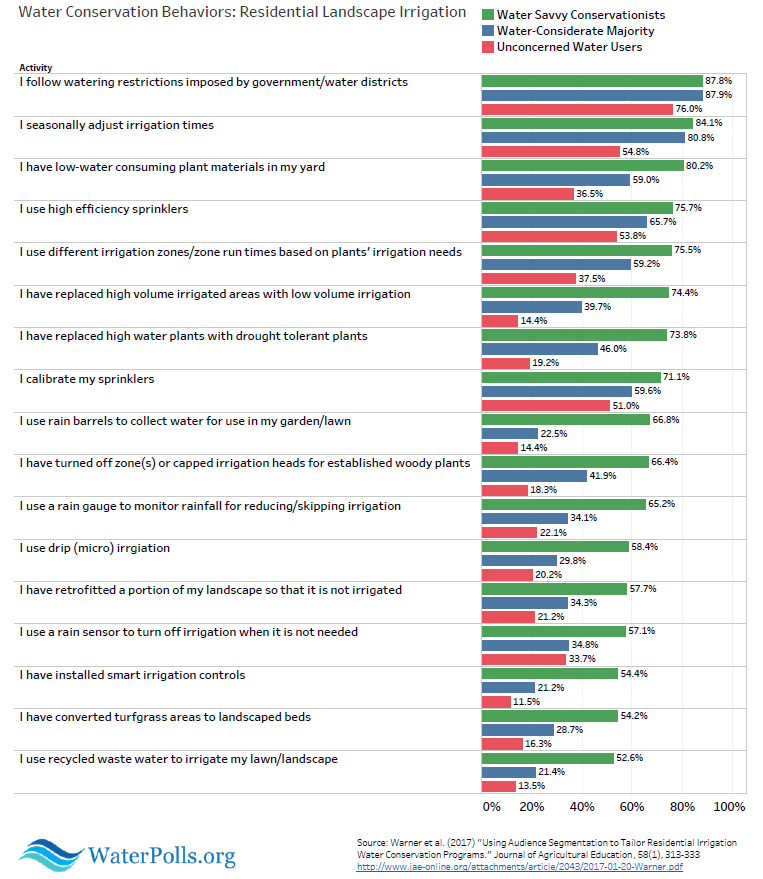 The graphic above is sorted by the percentage of water savvy conservationists who engage in the activity. While nearly everyone claims to follow watering restrictions imposed by the government or their water district, as you go down the list, the sub-groups’ behavior diverges. For example, 74% of the water savvy conservationists (shown in green) have replaced high-water-use plants with drought-tolerant landscaping, but only 19% of the unconcerned water users (colored red) have done the same. In the middle, at 46%, is the water considerate majority (blue).

Lead researcher Laura Warner, an assistant professor of agricultural education and communication at the University of Florida, said in a press release that the groups not only differ in how they approach outdoor watering but also in the social psychology that influences their behavior:

The savvy ones are also more likely to have social support or perceive expectations to conserve from friends and family, Warner said. So-called “unconcerned water users” lack the strong perceived value for water resources, said Warner, who is also affiliated with the UF/IFAS Center for Landscape Conservation and Ecology. Even though most people are conscious of their water use, their neighbors probably are unaware of these efforts to conserve water. So a little neighborly conservation would help everyone, Warner said. “For example, you don’t know your neighbors take short showers and you don’t see micro-irrigation in their landscape,” Warner said. “You do tend to notice wasteful practices, such as running irrigation sprinklers when it is raining.”

Avoiding a “one size fits all” approach

The research employed audience segmentation, a commercial marketing technique, to understand how different types of irrigators behave and respond to information. In a previous study focused on Florida, Warner and colleagues argued that the “water considerate majority” was the best target for conservation campaigns because this group already valued water efficiency but had plenty of room to improve.

“The diversity identified among the subgroups reveals that a ‘one-size fits all’ approach is unlikely to be the most appropriate strategy for encouraging the adoption of landscape water conservation practices,” according to the researchers.

The study also examined what types of educational programs appeal to each of the audiences. The graphic below, which I created using data from the study, shows that most people would prefer to visit a website to learn more about being water-wise. But even among the most committed conservationists, there’s not much appetite for activities such as attending courses, training, or other events. 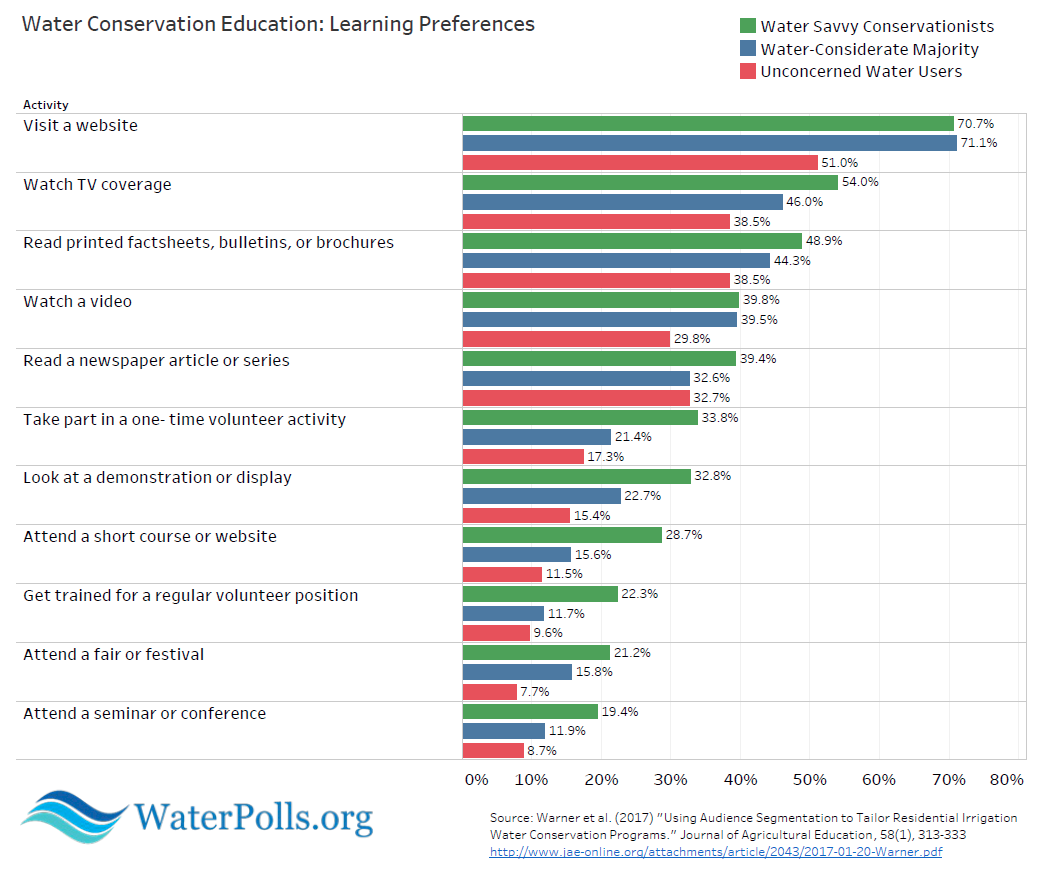 Here in the American West, it’s hard to understate the importance of irrigation in household water use. For example, the water bill for our Denver home triples to quadruples in the summer for the sole reason that we turn on our sprinklers and our consumption soars. Even though we’ve removed most of our grass, use drip irrigation, and would probably be characterized as “water savvy conservationists,” we still use a ton of water outdoors.

“If the average sized lawn in the United States is watered for 20 minutes every day for 7 days,” according to the EPA, “it’s like running the shower constantly for 4 days or taking more than 800 showers. That’s equivalent to the amount of water needed for the average family to take 1 year’s worth of showers.”