With back-to-back major hurricanes striking the United States, we’ve been hearing a lot lately about flooding and the Federal Emergency Management Agency (FEMA).

The disaster relief agency has conducted some surveys related to flood risks and mitigation, asking both ordinary Americans and local officials about their perceptions and preparations.

For the public polling, the most recent survey results I’ve found online are from 2000 to 2013, when FEMA conducted telephone interviews across the country. For the survey of local officials, the most current data on FEMA’s website is from 2015 and based on online surveys of “local officials who would likely have awareness of issues related to flooding.”

Below are a few highlights from these FEMA flooding surveys. If you’d like to learn more about public opinion on flooding, be sure to check out my previous post on The Pew Charitable Trust’s 2017 poll on flooding in America, which found bipartisan support for reforming a number of policies.

About 1 in 3 Americans say their community faces flooding risks

For four years in a row, FEMA asked Americans about flood risks and found that between 30% and 40% of those surveyed believe their own community is at risk. However, fewer than 1 in 10 Americans said their community faced a “high” risk and only about 1 in 10 said their own house was at risk of flooding. 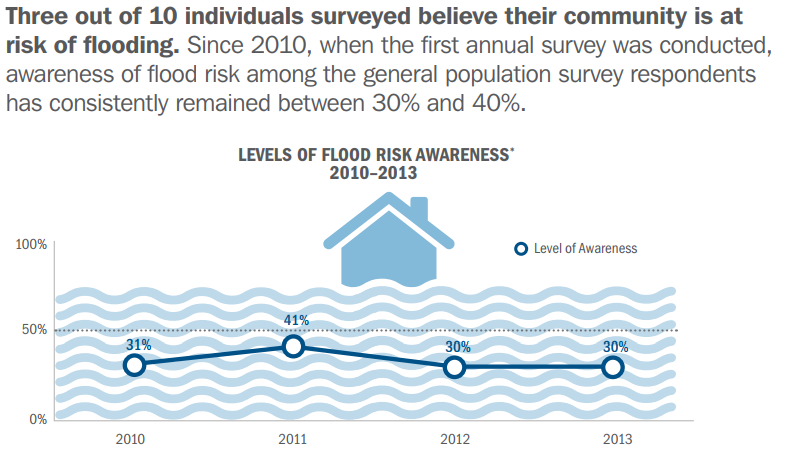 The surveys were conducted as a part of FEMA’s Risk MAP program, which provides maps of flood hazards and helps local officials mitigate those risks. As you would expect, people who live in Risk MAP communities were more aware of flooding risks for their community and their own home, but as shown in the graphic below, the difference wasn’t huge. 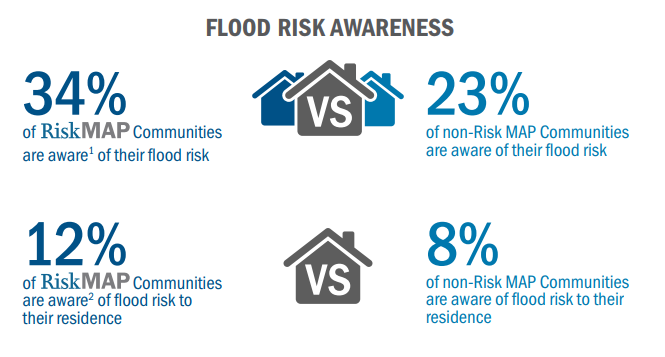 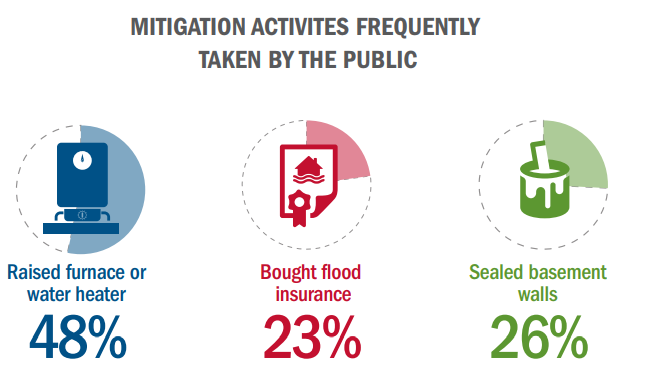 Among those who weren’t taking any measures to mitigate flood risks, 72% said they didn’t think their primary residence was at risk, 14% said they couldn’t afford to take action, and 4% were not sure of what to do (another 10% were classified as “other”).

Based on the 2010 survey, FEMA reported that only one-third of people were aware that federally backed flood insurance was available in their community. When asked if their homeowners or renters insurance covered flooding, 27% of households said they were insured and 55% said flood damage wasn’t covered (flooding typically isn’t covered by standard insurance policies).

The 2010 survey also found that 43% of respondents expect to hear about flood risks from a local elected official, 31% expect their insurance agent to be the source, 26% look to emergency managers, and 21% cite mortgage lenders and floodplain managers. Do people even know they’re moving into a property at risk of flooding? Here’s how FEMA summarized the results from 2010: 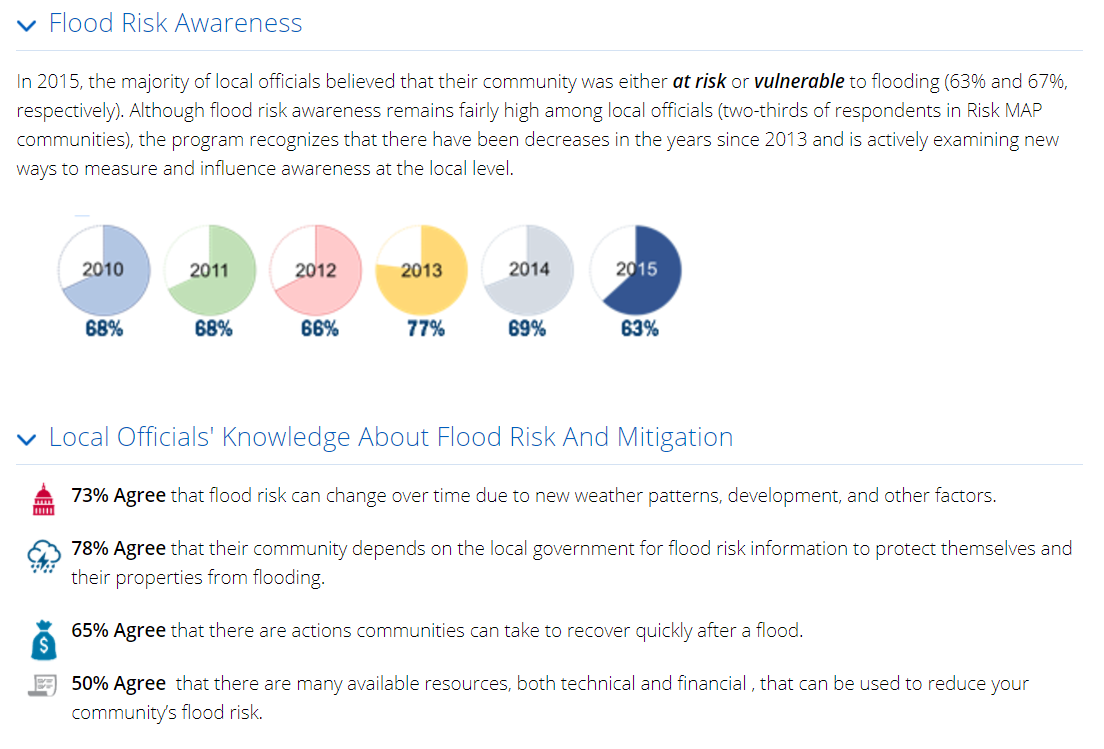 Combine the findings from these older FEMA surveys with the results from The Pew Charitable Trust’s more recent poll and I think it’s clear that plenty of Americans aren’t aware of the flood risks they face and a disturbing number falsely believe their insurance will pay for the damages if their homes are inundated. The many heartbreaking stories of Texas and Florida residents who are suddenly homeless and had no clue they were at risk are only the latest examples from recent years.

Climate change is amping up the hydrological cycle and leading to more extreme downpours (see graphic below from The National Climate Assessment), so flooding risks may increase in many areas, catching even more people unprepared. 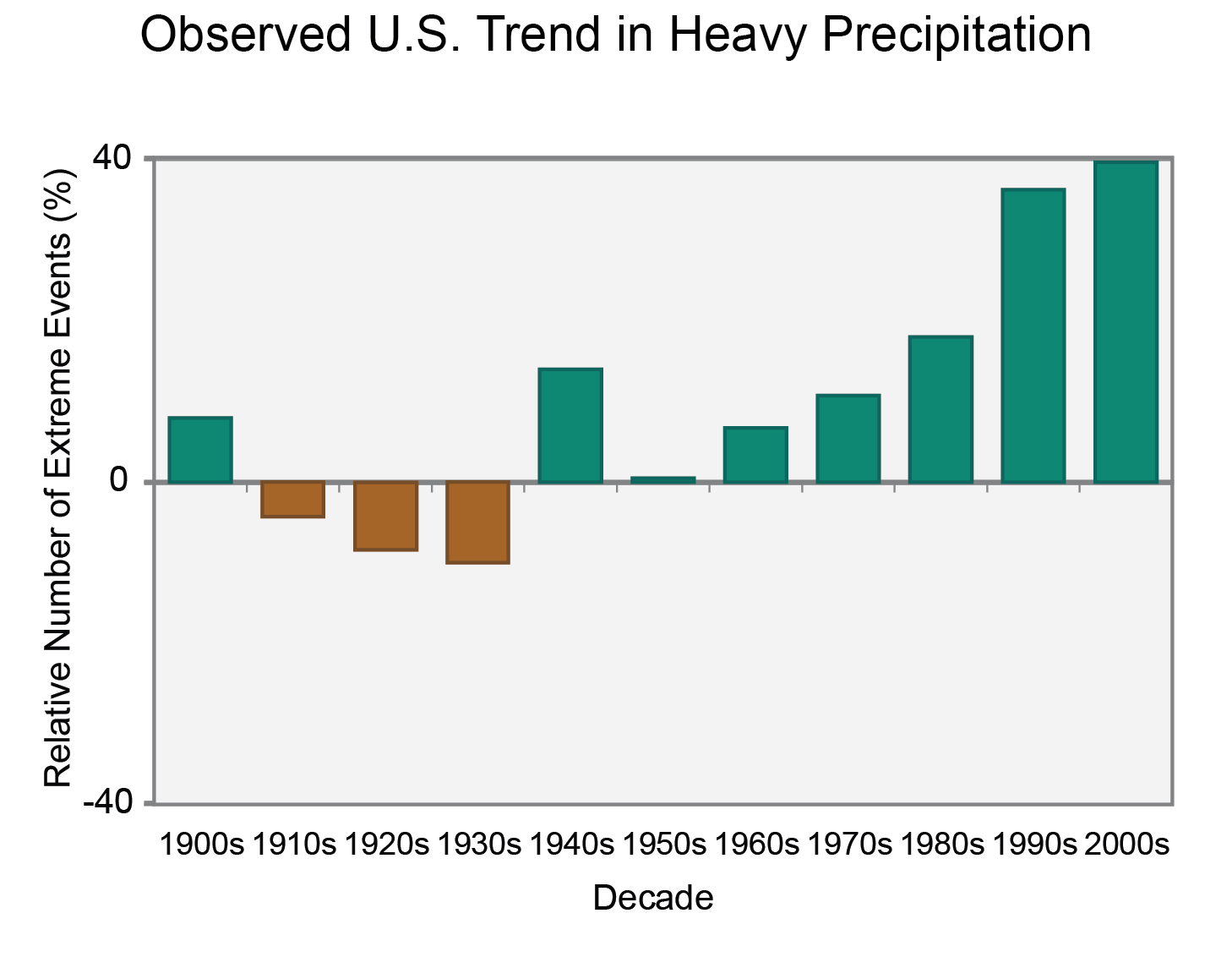