With Southeast Texas being inundated by Tropical Storm Harvey, I thought it would be helpful to look at a recent poll on flooding in the United States.

In March 2017, The Pew Charitable Trusts hired Public Opinion Strategies to conduct a nationwide survey on flooding and related policies.

The upshot of the poll is that there’s a strong, bipartisan consensus that the United States should improve how it prepares for flooding and mitigates the risks.

The graphic below, taken from a memo by the pollsters, shows that majorities of Republicans, Independents, and Democrats voiced support for four flood-related policies: 1) creating a national standard for disclosing flood risks to home buyers; 2) requiring that new federal funding of infrastructure in flood-prone areas supports more resilient projects; 3) supporting voluntary buy-outs of properties that repeatedly flood and are environmentally sensitive; and 4) requiring communities with repeat flooding to invest in preventative measures. 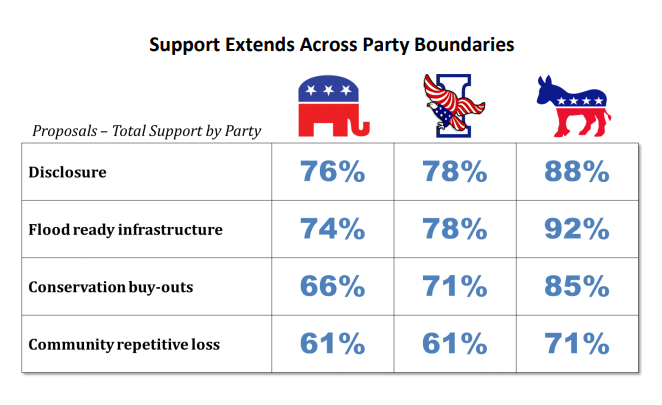 “In today’s political environment,” McInturff and Weigel wrote, “this is one of the rarer examples where support extends across party boundaries.”

Many Americans have been impacted by flooding

The flooding poll, which surveyed 1,000 registered voters by phone, found that more than 3 in 10 Americans say high water has affected their home, their business, or a family member’s home or business. 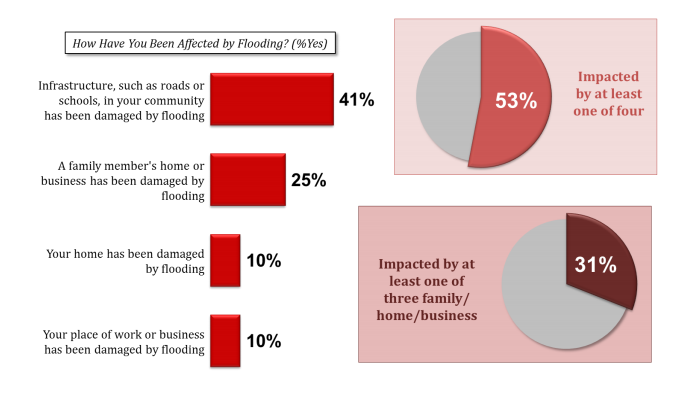 “Because flooding crosses the usual demographic boundaries, whether you are a man or woman, young or old, black or white, rich or poor, you are roughly equally likely to say you have been impacted by flooding,” the pollsters wrote. 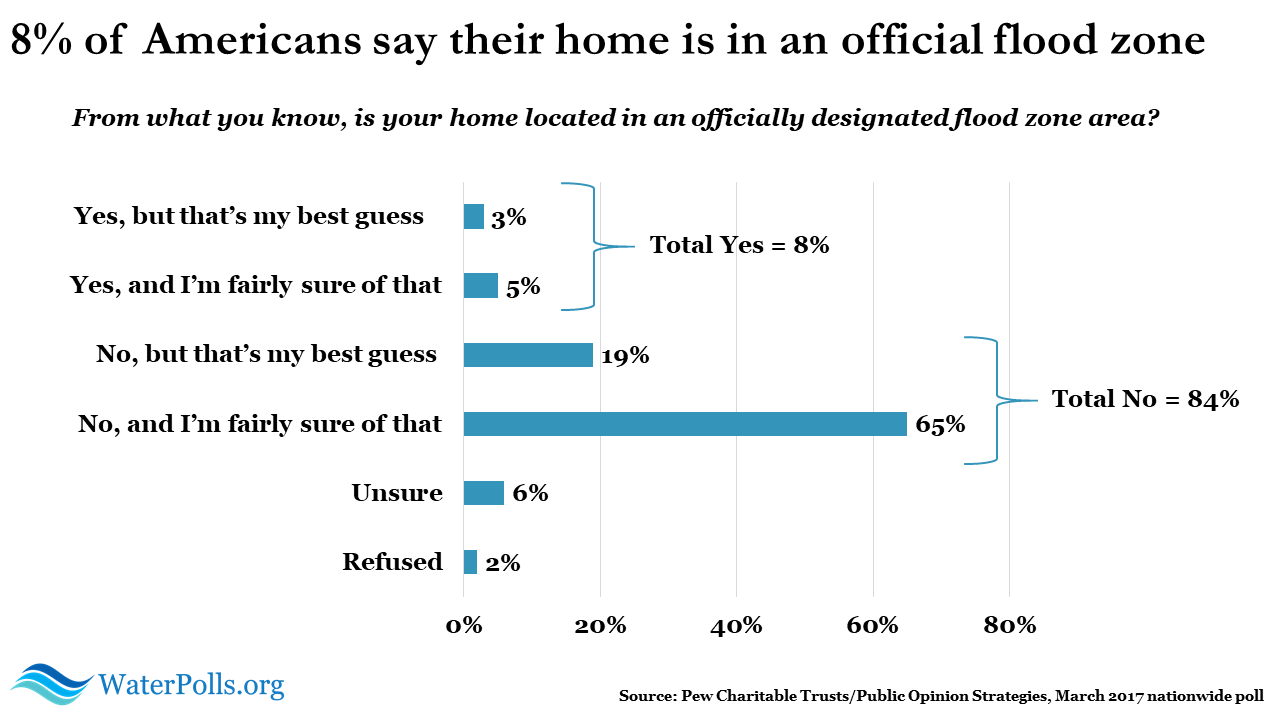 To better cope with floods, a majority of respondents said they support policies meant to mitigate flood risks. In the graphic below, which shows the exact wording of these questions, you can see there’s some variation in support for the four policies. Disclosure of flood risks to prospective home buyers was viewed most favorably, with 59% expressing strong support. Requiring communities with repetitive losses to invest in flood mitigation was the least popular, with only 28% of respondents voicing strong support. 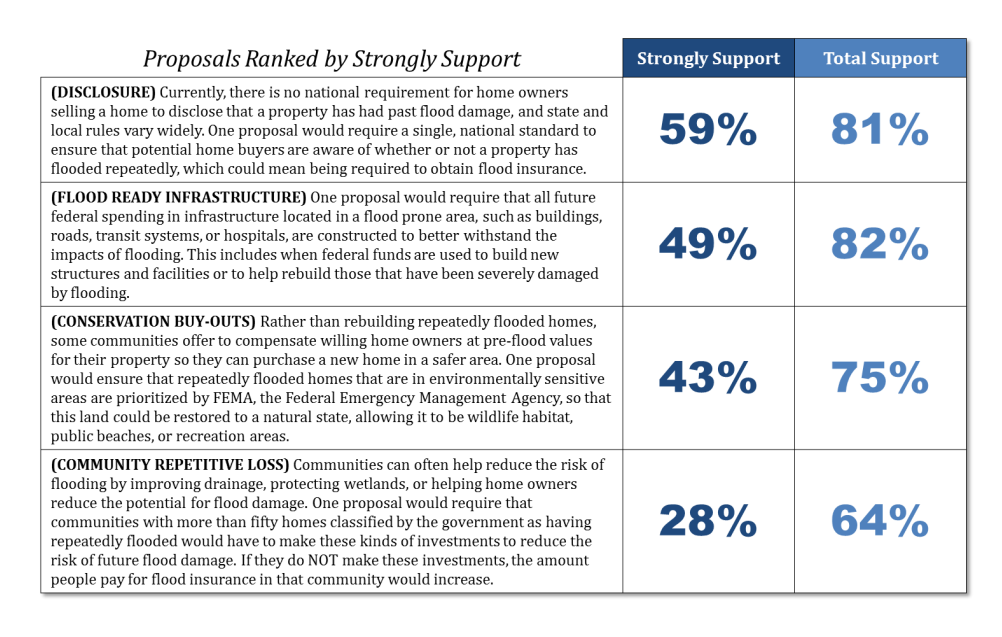 The poll found that voters overwhelming support flood disclosure, regardless of whether they have flood insurance or whether they rent/own, as shown in the chart below. 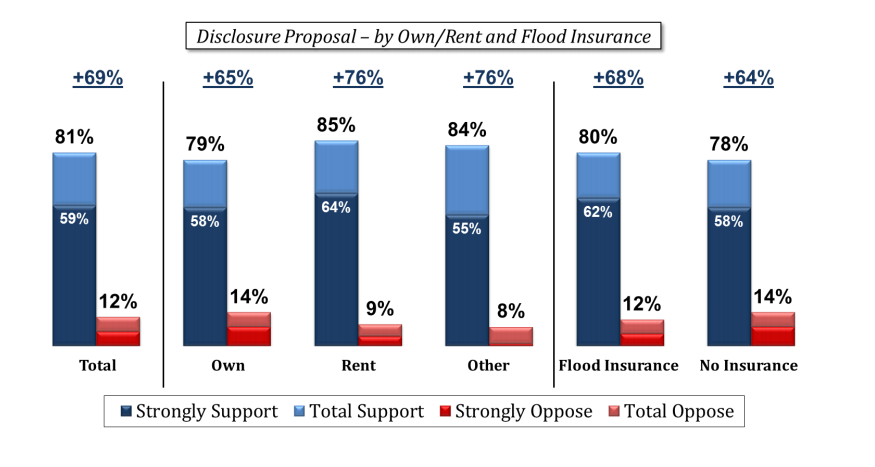 One interesting aspect of this survey is that it tested arguments for and against two potential policies: disclosure of flood risks to prospective home buyers and flood-protection requirements for communities that suffer repetitive losses. In the graphics below, which show the pro and con arguments for each policy, the supportive view was much more popular. 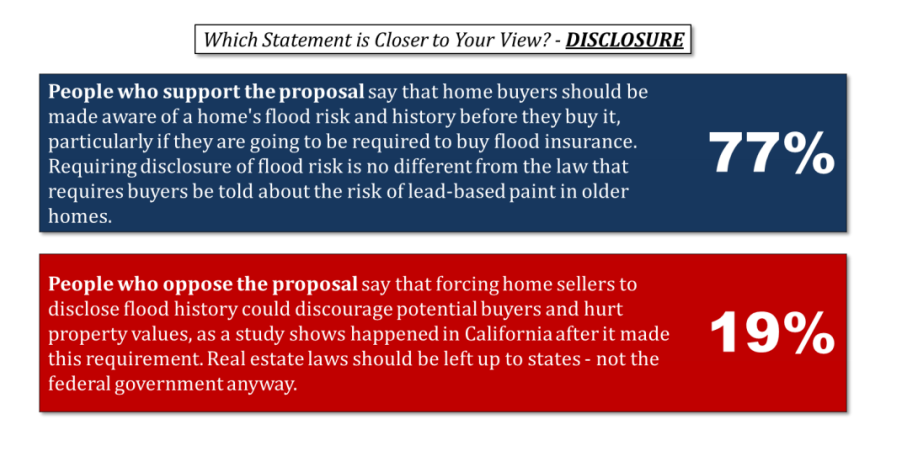 There were some partisan differences in responses to the policy questions. Democrats were more supportive than Republicans, with Independents in the middle. But both policies garnered majority approval across all three parties. It’s yet another example of bipartisanship in the water world, a topic we’ve covered here and here.

The poll was conducted months before Harvey, so if the same questions were asked now, in the wake of a tidal wave of media coverage of flooding, I suspect the results would be different and reveal even greater concern about the issue. When asked in March 2017 if their worries about “flood-related disasters” had changed over the past five years, 16% said they worried more, 15% said they worried less, and 68% said they worried about the same.

The survey’s results show a fairly widespread concern about flooding and broad-based support for reforming how we deal with such disasters. That said, flooding is just one of many natural and human-caused problems that Americans worry about when it comes to their lives and property. As shown in the graphic below, which I created using data from the poll, Americans say they worry more about problems such as crime, drugs, infrastructure, and traffic than they fret about flooding or droughts. But climate change, which is expected to worsen both flooding and droughts, ranked near the top of concerns, with 37% of respondents describing it as a “very serious” problem. 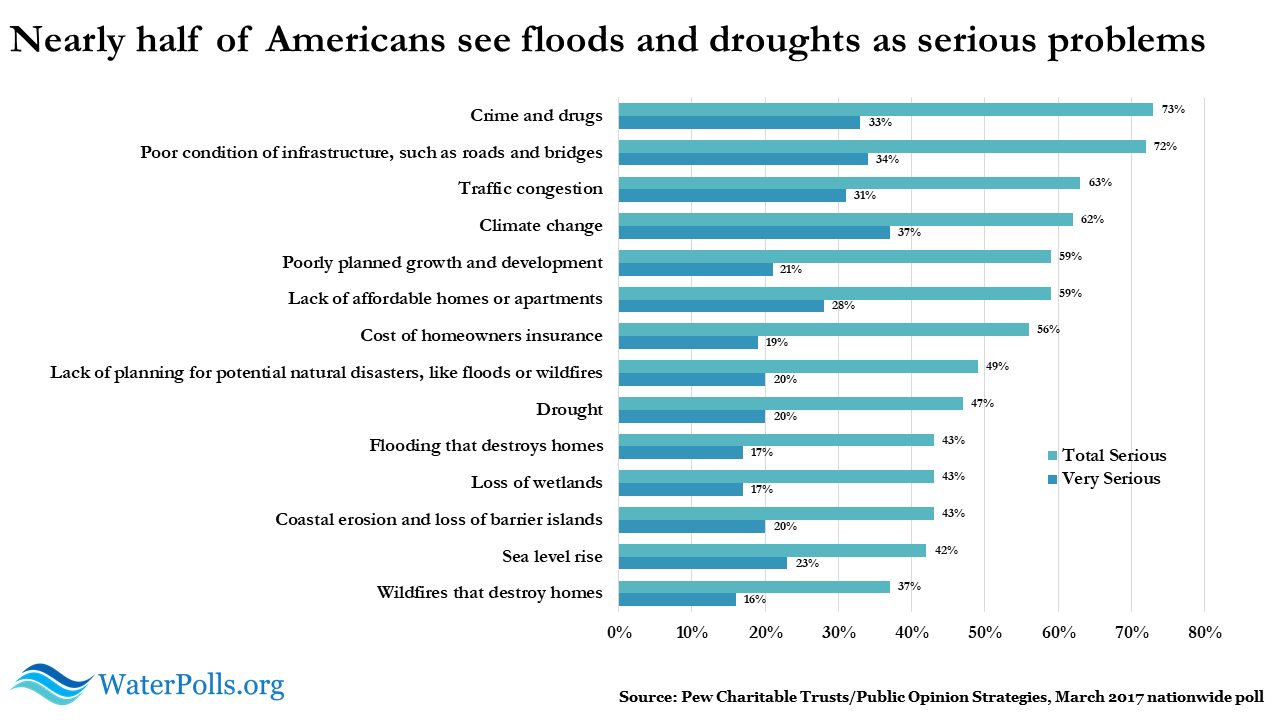 I write this as Tropical Storm Harvey is still churning along the Gulf Coast and delivering rainfall by the foot, but already we know this catastrophe will be one of the major news stories of 2017. With many media outlets asking about the connection to climate change, Harvey could influence public opinion on extreme weather and related water issues, joining hurricanes Katrina and Sandy as potent reminders of our vulnerabilities.

I’ll be on the lookout for other polling related to flooding and invite you to drop me a line if you know of any relevant surveys.