3 takeaways from Gallup’s polling on water

For decades, Gallup has asked Americans about their water and it has found plenty of worry, especially over pollution. The Gallup poll doesn’t delve deeply into water policy. But it’s a useful national barometer for concern over water.

“Polluted drinking water and the pollution of rivers, lakes and reservoirs have consistently topped Americans’ concerns throughout Gallup’s 27-year trend measuring these environmental issues,” the organization reported in April 2016. Gallup’s water-related questions have focused on water pollution, rather than the water supply. Although water is not strictly an “environmental” issue, Gallup includes its questions and analysis under that rubric–a framing which may color the results.

Below are three key takeaways from Gallup’s national polling. You can learn more and download the data through our interactive dashboard.

Gallup has regularly asked Americans about their level of worry over various environmental problems. The figure shows that water has consistently been at the top of the list. The poll has asked about both “pollution of drinking water” and “pollution of rivers, lakes, and reservoirs,” which have ranked first and second in virtually every year. From 2002 to 2011, Gallup asked about the “maintenance of the nation’s supply of fresh water for household needs” and about half of Americans said they worried a “great deal” about the issue. But the question hasn’t been asked in more recent years. 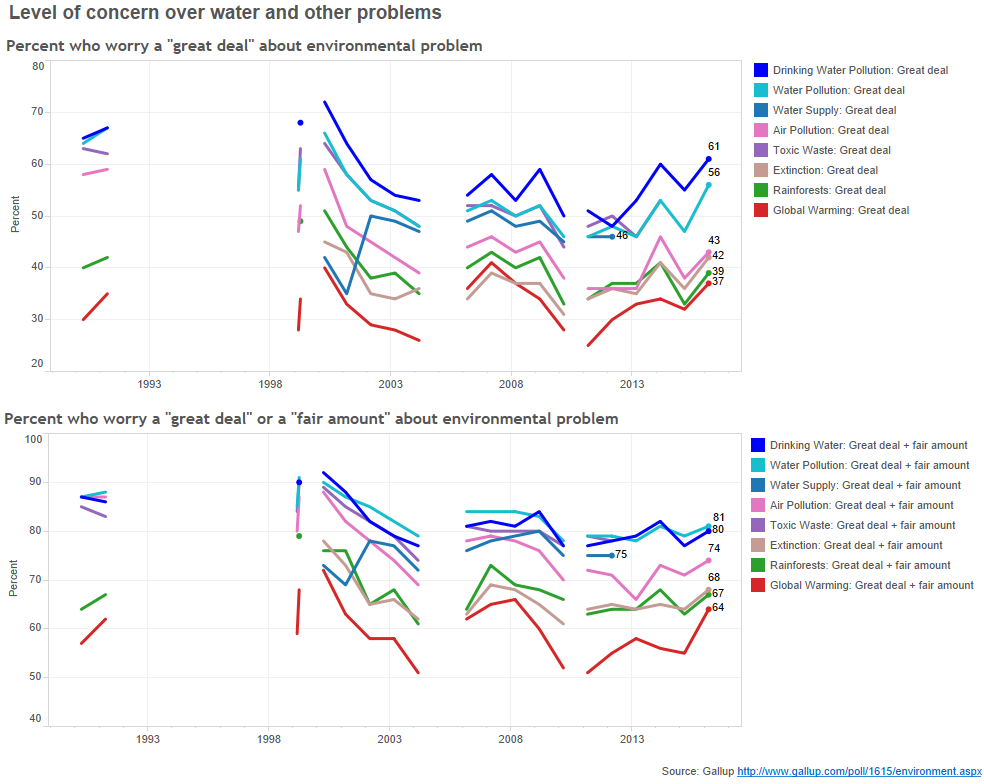 The levels of concern over environmental issues tend to move together. Issues such as global warming, loss of rainforests, and extinction of species are consistently at the bottom of the list. Pollution of air, water, and soil are always at the top.

2) The vast majority of Americans worry about water pollution

The figure below summaries how Americans have answered water-related questions since 1989. In the most recent survey, Gallup found that 61% of Americans worry a “great deal” about pollution of drinking water and another 19% worry a “fair amount.” The results are similar when the Gallup poll asks, somewhat redundantly, about “pollution of rivers, lakes, and reservoirs.” In fact, in more than a quarter-century of polling Gallup has never found more than 8% of Americans saying they’re “not at all” worried about water pollution. 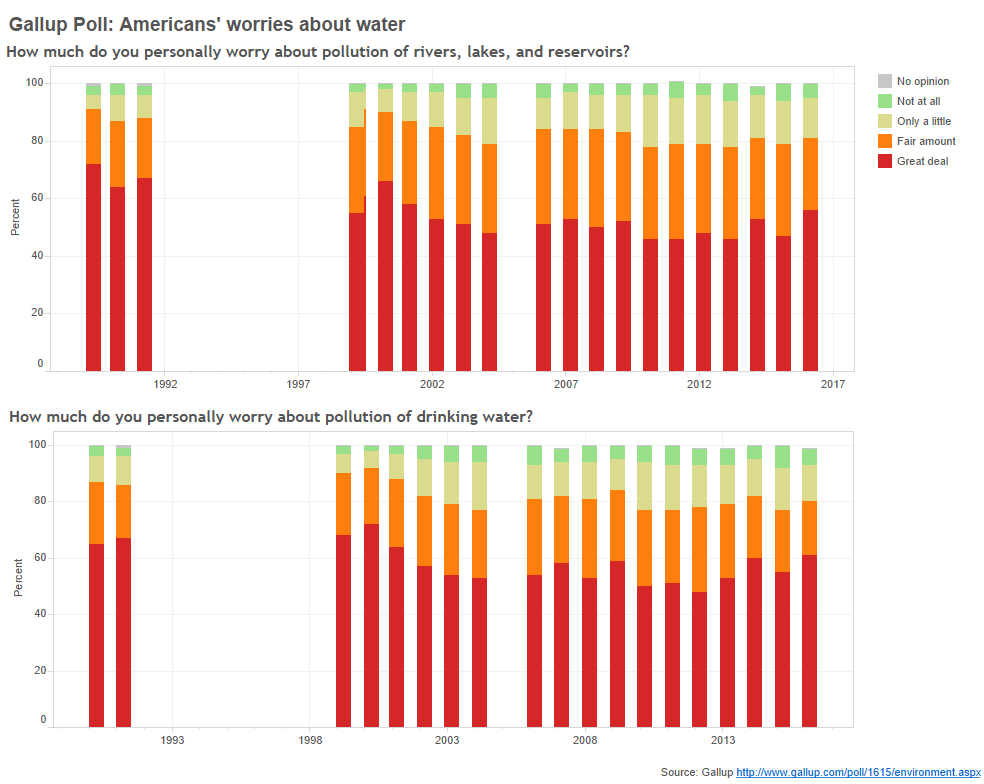 The 2016 poll revealed a 6 percentage point increase in the share of Americans worried a “great deal” about drinking water pollution. There was also a 9 percentage point increase in those worried a “great deal” about pollution of rivers, lakes, and reservoirs. From 2014 to 2015, levels of concern had decreased by similar amounts, leading Gallup to hypothesize that the Flint water crisis was playing a role.

Public data released by Gallup on water issues is typically at the national level and does not include cross-tabulations by demographic variables. But in its most recent poll, the organization reported results by political party for the past three years. As shown in the figure below, water pollution is the top concern among both Democrats and Republicans. As with other environmental issues, there is a significant partisan gap of about 25%. This gap is comparable to the one on air pollution, narrower than the divide on climate change, and wider than the division over loss of tropical rainforests and species (in large part because only around half of Democrats worry a great deal about these issues). In 2014 and 2015, the partisan gap over drinking water pollution was slightly lower (21% and 17%), as was the divide over pollution of rivers, lakes, and reservoirs (21% and 19%). 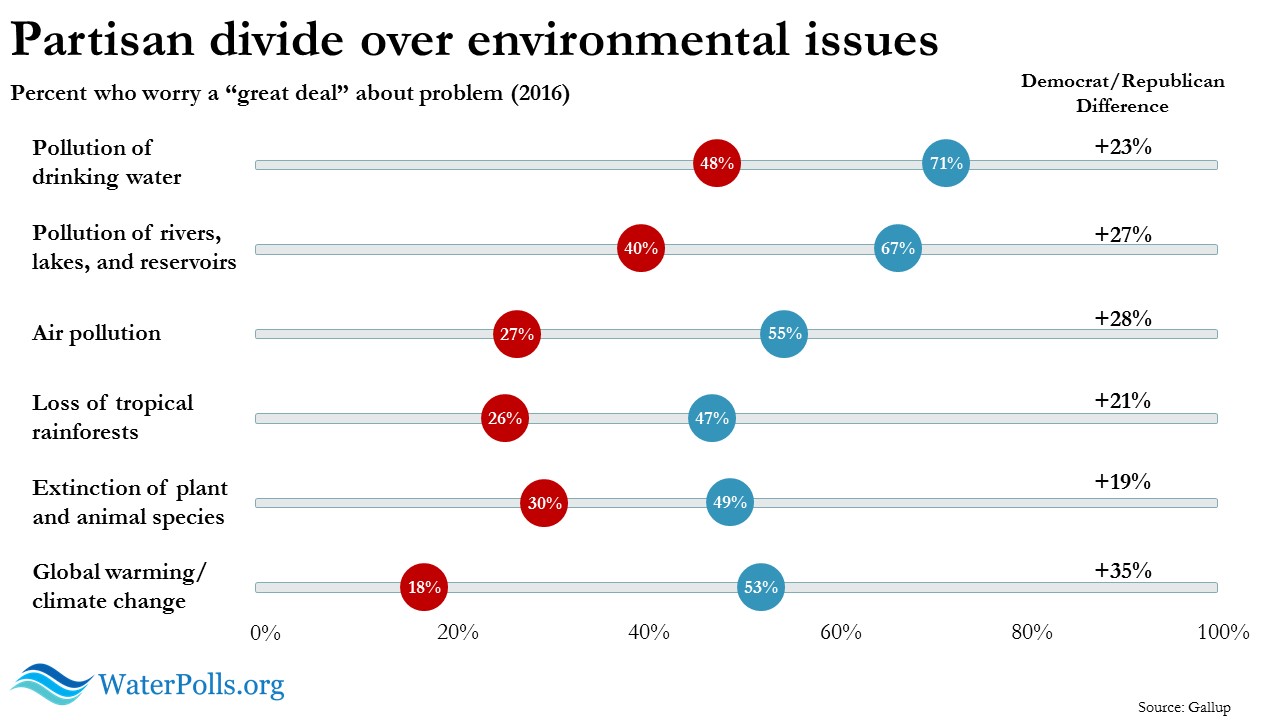 Our dashboard page tracks the results of key questions from the Gallup poll.

You can also download the underlying data I’ve used to create the interactive: