A new poll from the Public Policy Institute of California has found that Californians’ concerns about their water supply have decreased since wetter weather has returned to the state.

Nevertheless, many Californians remain worried about their water and plenty still want to see local governments doing more to promote water conservation. Support for desalination has also increased over the past decade.

Below are three water-related highlights from the poll, which also covered other environmental issues and is based on interviews with 1,708 Californians in July 2017.

PPIC has been asking Californians about their water supply for nearly a decade (see our earlier post for a summary and our dashboard page for the data). As one would expect, views of the state’s water supply are strongly influenced by the weather.

During the recent drought, the fraction of Californians saying their water supply faced a “big problem” soared to a peak of 70% in the summer of 2015 while the share of residents saying there was “not much of a problem” fell to a low of 10%. As shown in the graphic below (click to enlarge), PPIC’s latest poll reveals a major shift following one of the wettest winter’s in the state’s history. By July 2017, 37% of Californians labeled their water supply as a “big problem” while 34% said it was “not much of a problem.” Californians’ concerns about their water supply had already been on a downward trend since the drought’s nadir in 2015, but the remarkably wet winter of 2016/2017 really made an impression. 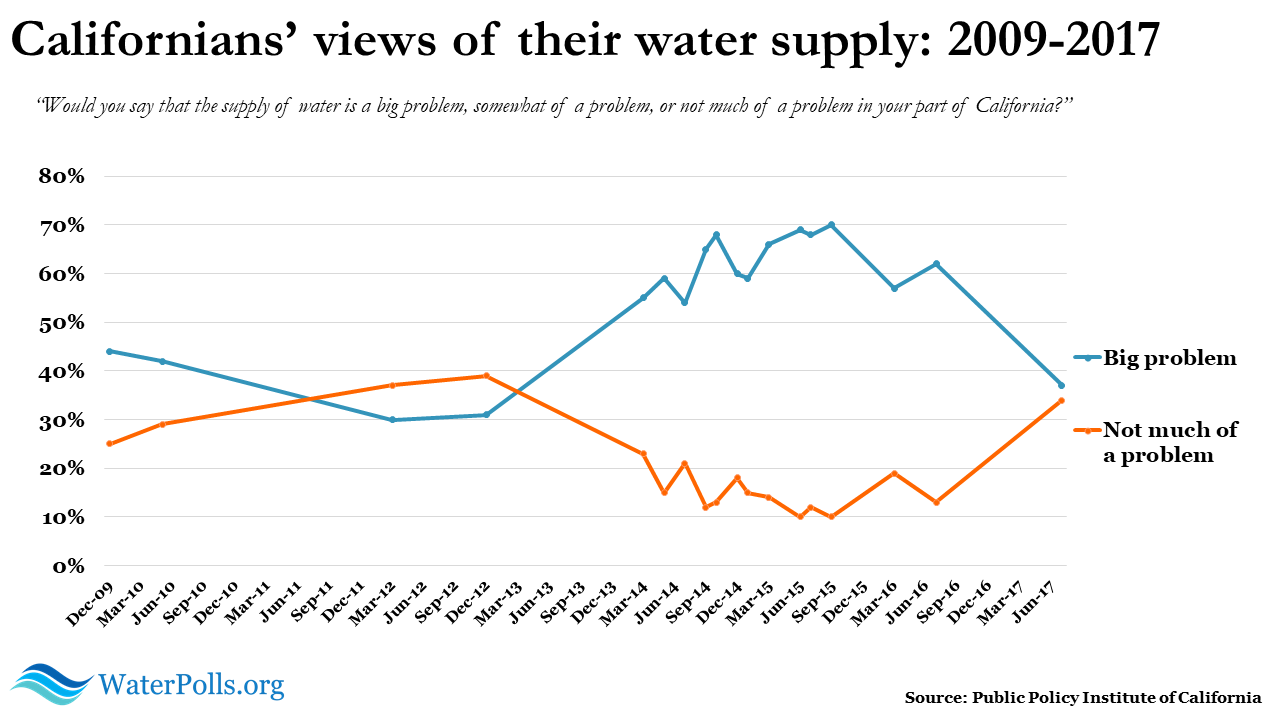 The graphic below includes the two other responses to the water supply question: “somewhat of a problem” and “don’t know.” Although the share of Californians describing their water supply as a “big problem” has fallen by nearly one-half since 2015, it’s worth noting that a solid majority of the state–64% of all adults and 71% of likely voters–still describe the issue as either a “big problem” or “somewhat of a problem.” 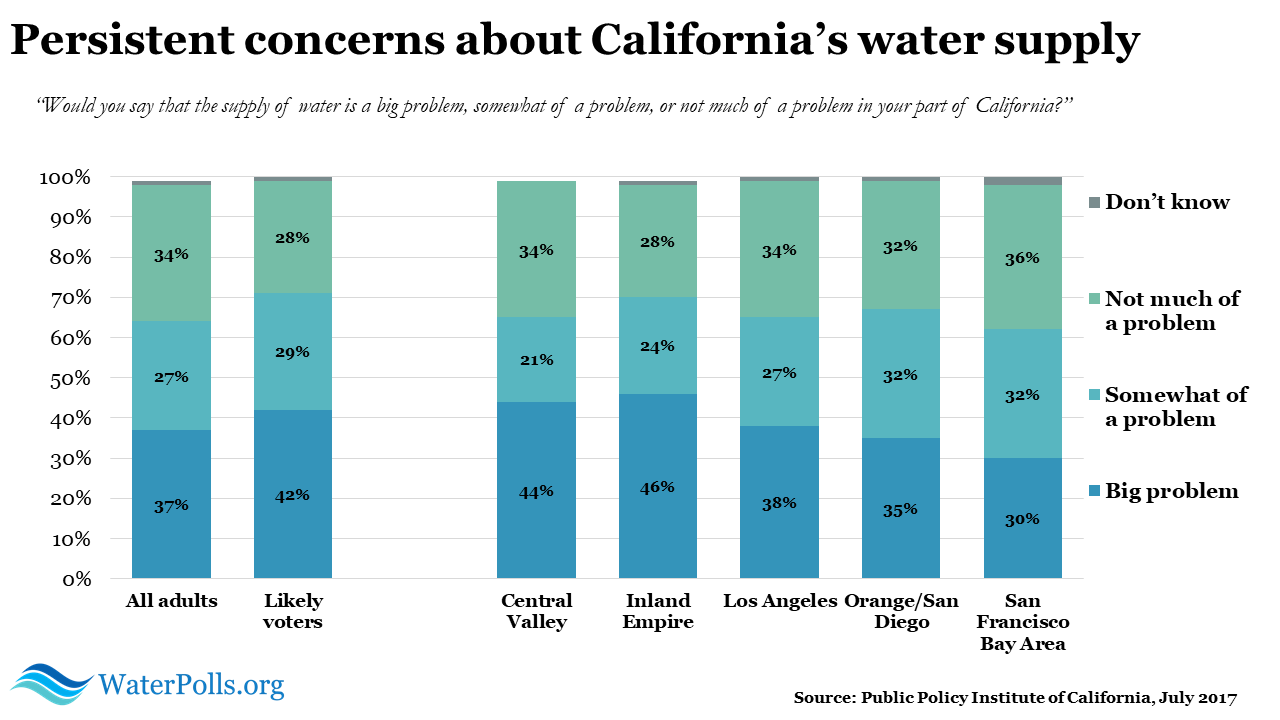 Looking across California, there are some regional differences in concern over local water supplies, but the disparities aren’t huge. 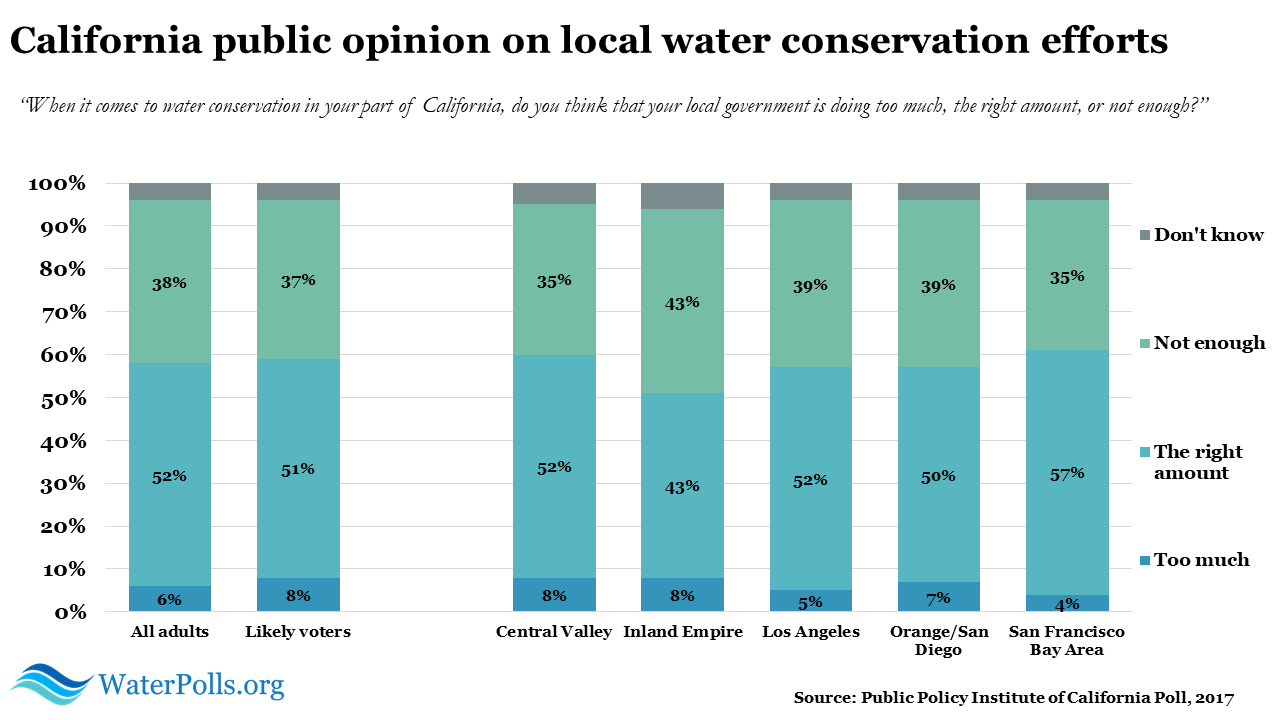 3) More support for desalination along the California coast

Another notable finding from the PPIC water poll is an apparent increase in support for turning the ocean into potable water along the California coast. The last time PPIC asked this question, in February 2006, 56% of California adults and 58% of likely voters said they favored the approach. By July 2017, 67% of adults and 68% of likely voters backed desalination. 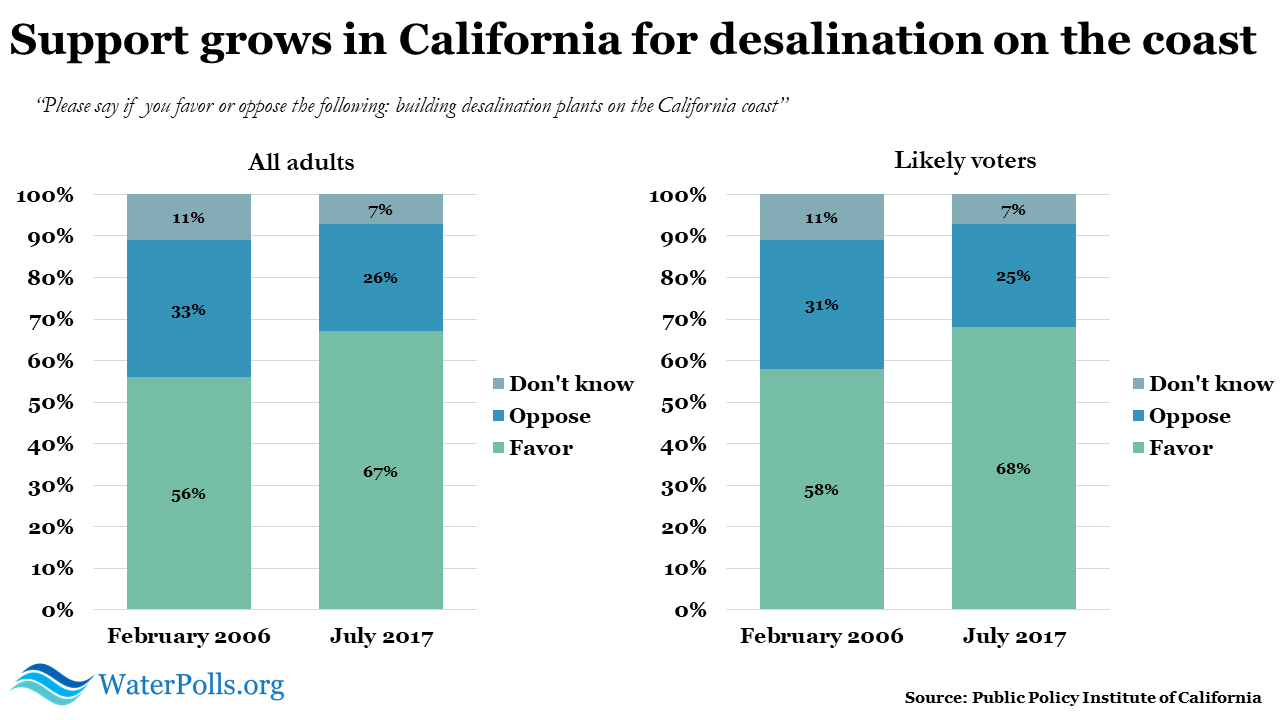 Two data points separated by 11 years don’t necessarily constitute a trend. But it stands to reason that a historic drought would cause Californians to embrace alternative approaches to boosting the water supply. Moreover, the 11 years since 2006 have been filled with warnings from climate scientists and others about the precarious nature of California’s water supply, so it’s possible that more Californians now see this technology as essential for adapting to 21st century warming.