A new Water Foundation poll of voters in 12 Western states has found a convergence of opinion on water problems and solutions. To be sure, there are partisan, geographic, and demographic differences in the sprawling, diverse region, but overall the results point to more consensus than division.

The bipartisan survey, based on 1,462 online and phone interviews with voters in September and October 2017, is the most comprehensive view of Western public opinion on water issues that I’ve seen to date.

Democratic pollster Dave Metz of FM3 and Republican pollster Lori Weigel of Public Opinion Strategies summarized their findings in 14 takeaways. Below are those key findings, taken verbatim from their PowerPoint presentation, along with some relevant slides (see this page for a full gallery of graphics from the poll). I’ve combined a couple of the findings in order to narrow the list to 12 takeaways.

1) Westerners are confident that the needs of competing water users can be met – that our water challenges are ultimately problems that can be solved.

Many people think Western water issues are a zero-sum game where different users are locked in an eternal struggle over a limited resource, but the vast majority of Westerners believe the region can have it all: enough water for cities, farms, wildlife, and recreation. 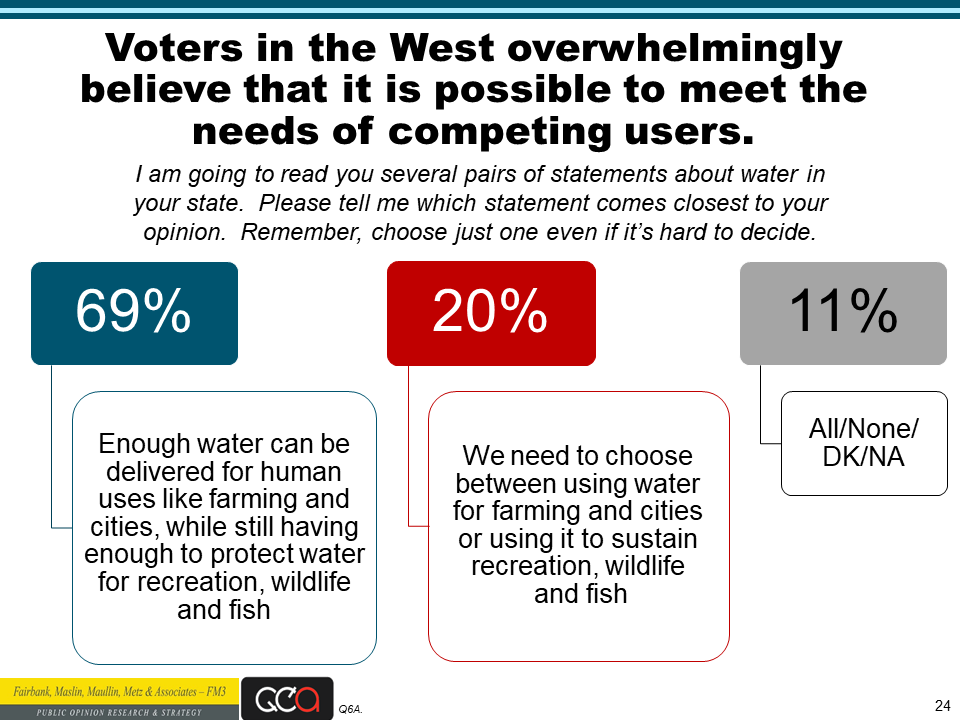 2) In a deeply partisan political climate, much of Western public opinion on water is consistent across party lines. While water is a remarkably bipartisan issue overall, Western Democrats express much more intense concern about water issues, and stronger support for potential policy solutions, than do other voters.

Water tends to be more bipartisan than other issues. As shown in the slide below, keeping drinking water safe and clean is a priority for more than four in five Democrats, Independents, and Republicans. 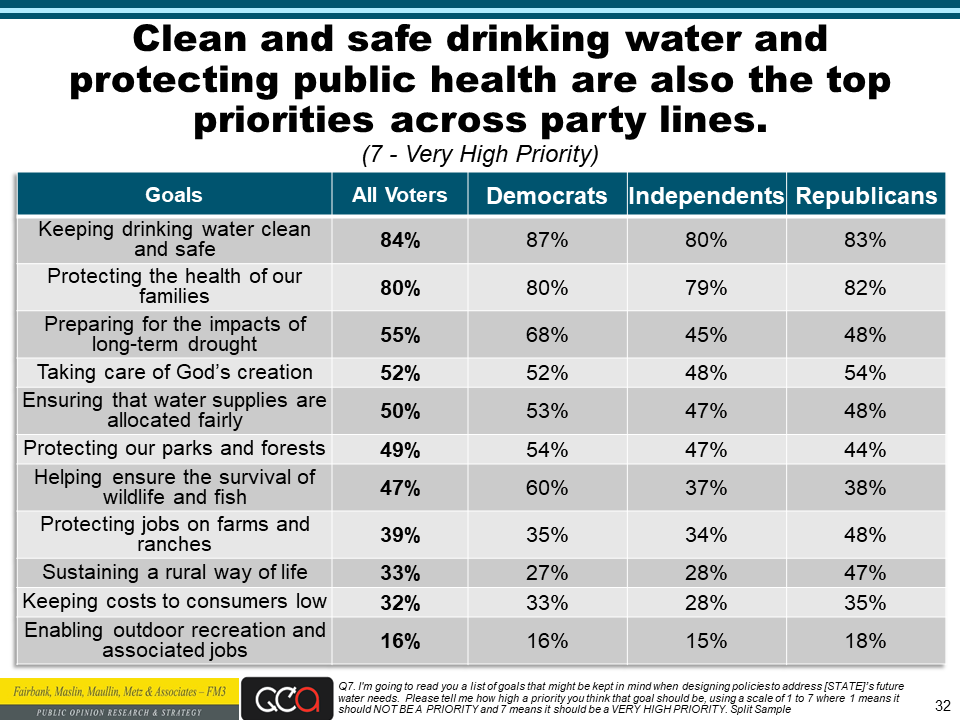 But any time climate change figures into a survey question, the partisanship is unmistakable in the responses. The slide below shows that far more Democrats than Republicans are concerned about the threat, regardless of whether it’s described as “climate change” or “global warming,” with Independents in between. 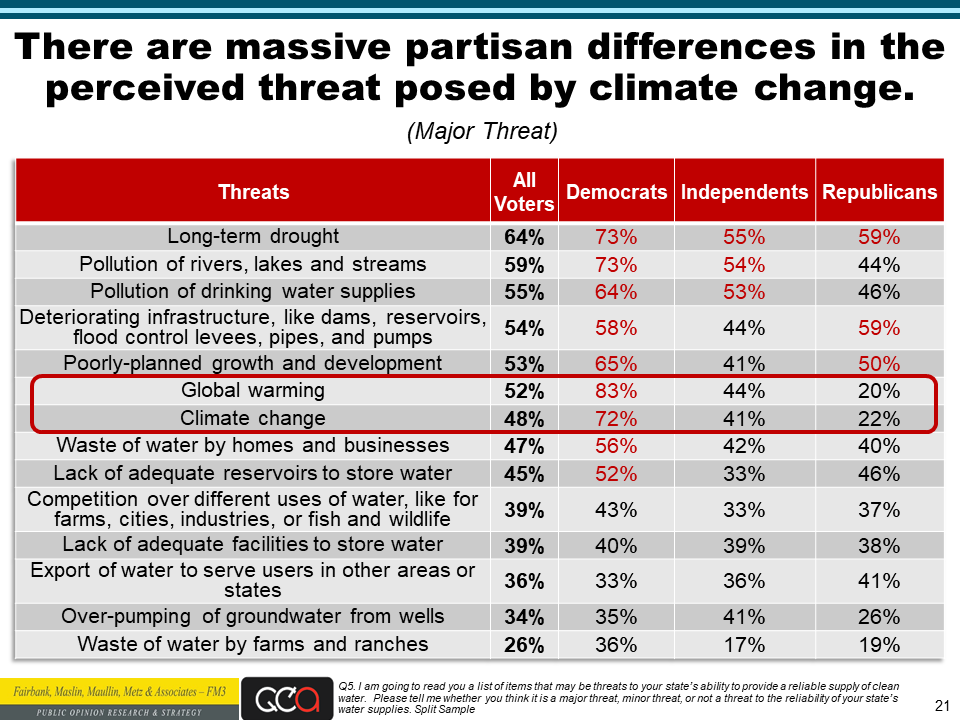 3) Echoing the findings of national research, voters are highly concerned about the condition of water infrastructure – and willing to support a range of improvements to address it, even if it means higher water bills. 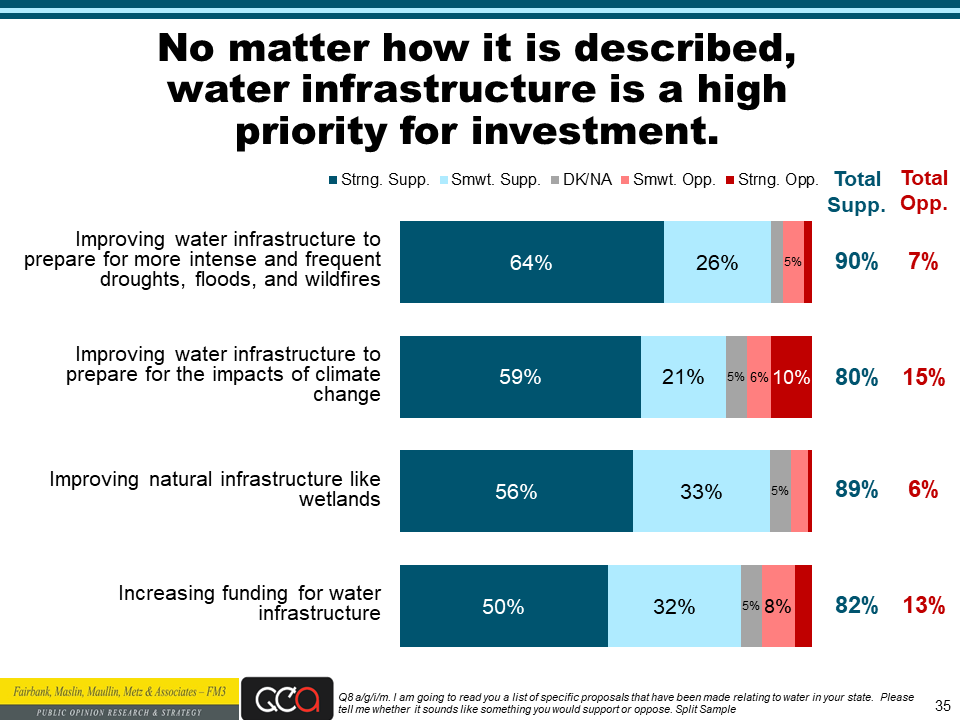 4) Western voters are comfortable with what they pay for water – and are willing to pay a bit more to meet challenges facing water supplies. 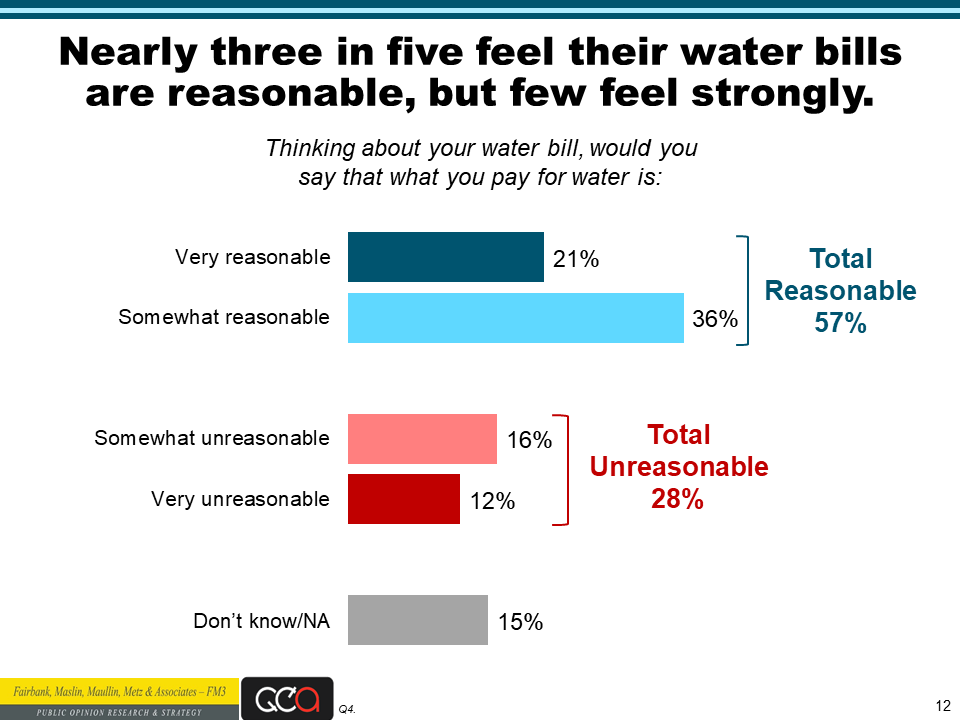 In general, voters are willing to pay an extra dollar per month on their water bill to support infrastructure improvements and ensure the supply of clean water. 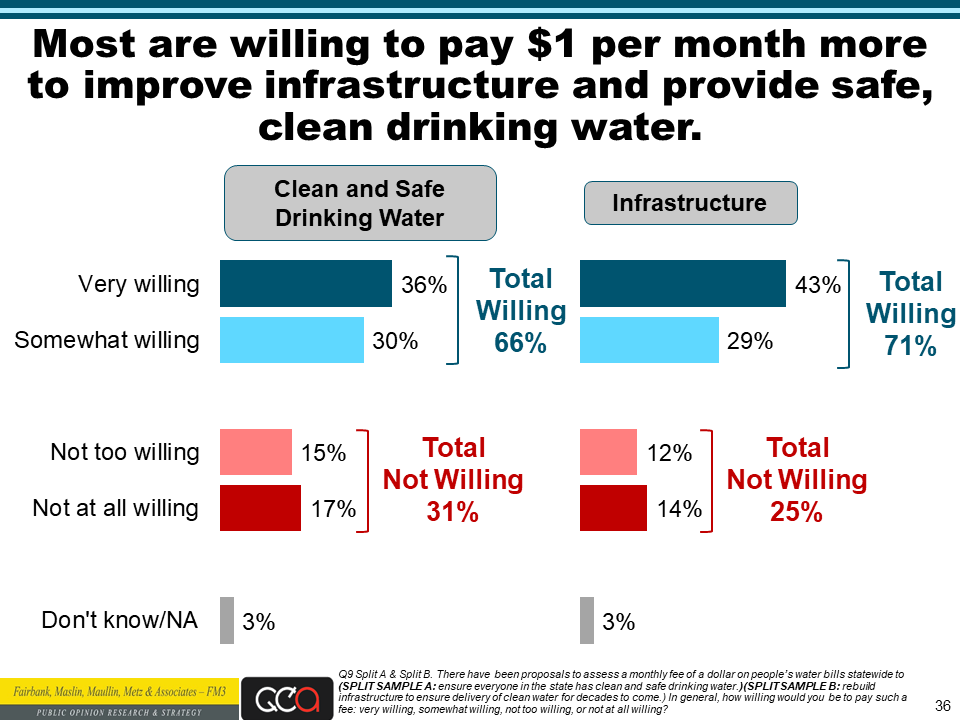 5) As a top-of-mind concern, water supply is named much more frequently by Western voters than is water quality. At the same time, looking forward voters place by far the highest priority on water quality – protecting public health and ensuring clean, safe drinking water.

The slide below shows that supply issues tend to be the most worrisome for Westerners. But other results from the poll (see takeaway 9 below) reveal that voters prioritize preventing public health problems by safeguarding water quality. 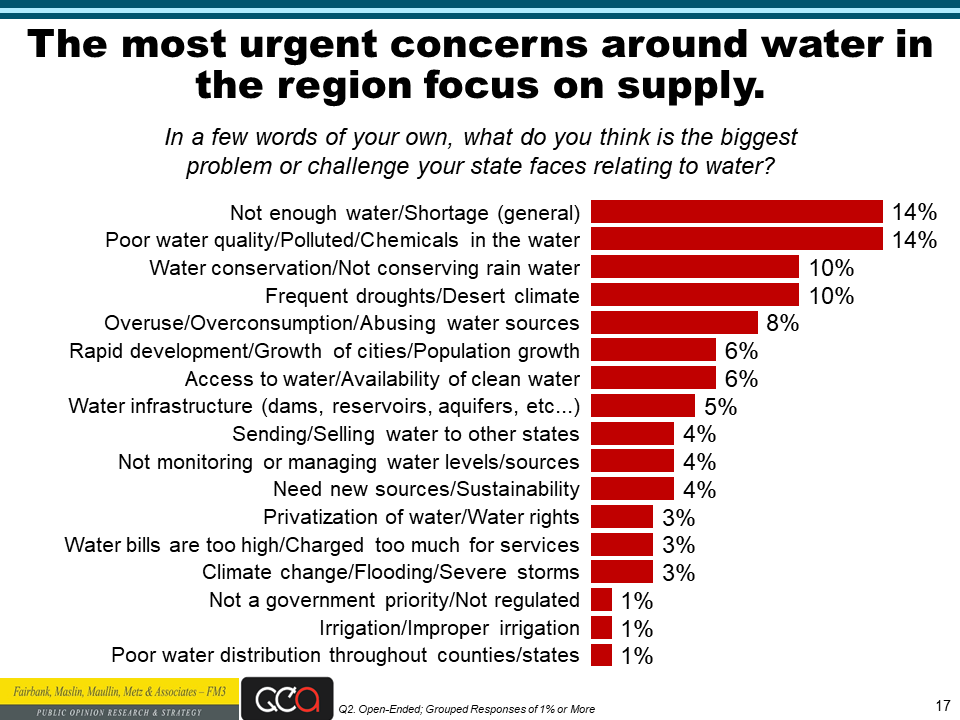 6) Voters think water supplies are getting more unpredictable with each passing year – a perception that is particularly acute in cities, in the south, and among Democrats.

Many parts of the West have whipsawed between drought and flood in recent years. Voters in the region seem to be noticing. The slide below shows that a majority of all voters think the West’s water supply is getting more unpredictable, but there are some partisan and demographic differences. 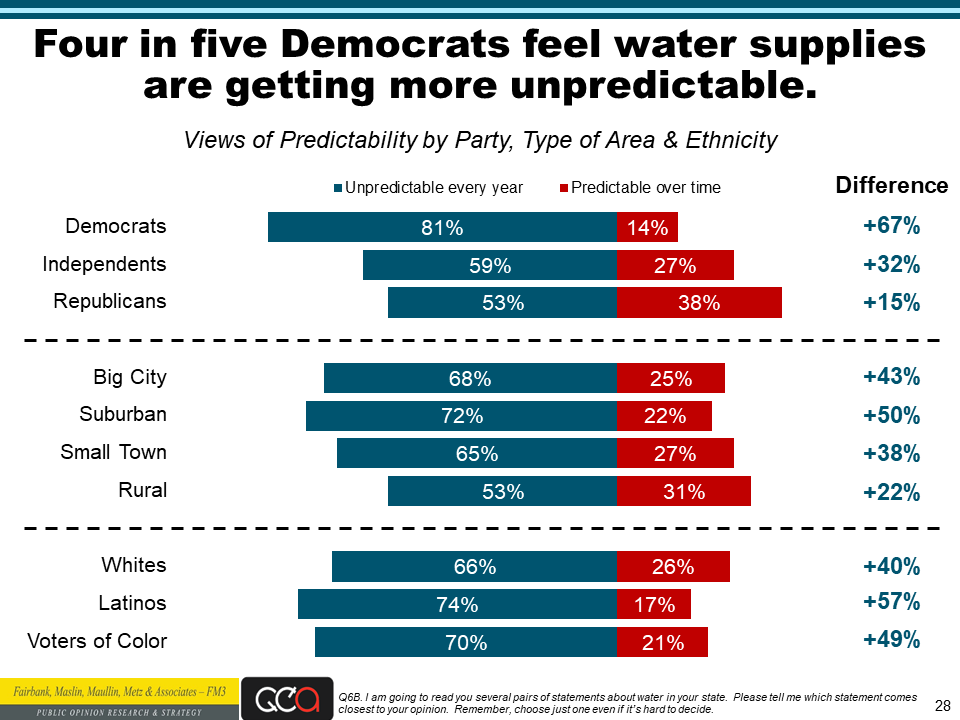 The poll also found some geographic disparities on the question of unpredictability. Residents of Southern states are more likely to say that water supplies are getting more uncertain. 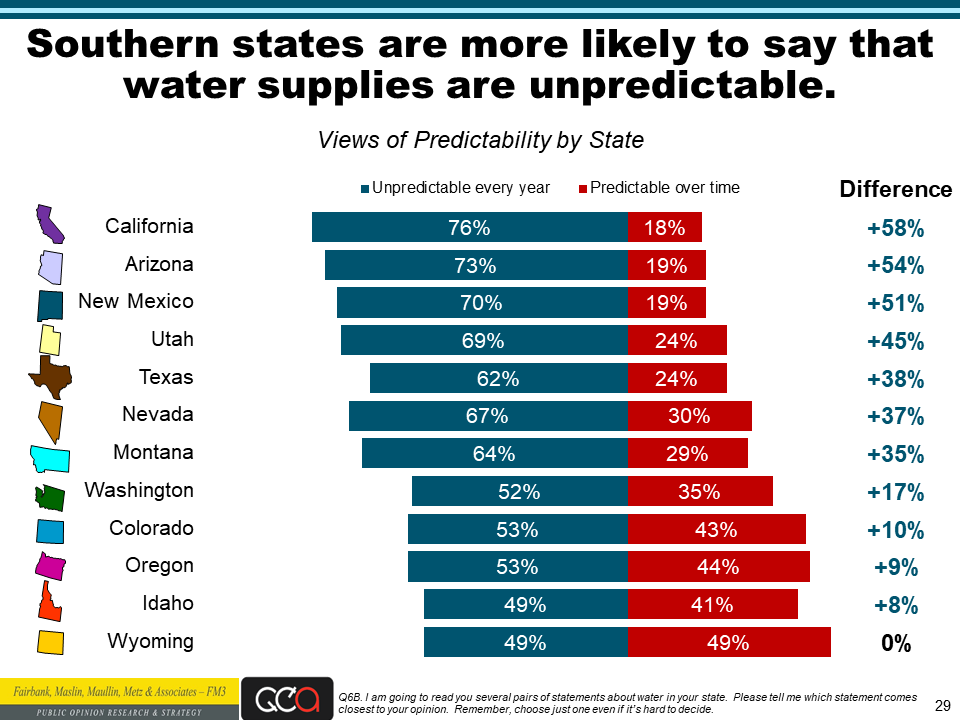 7) Differences among subregions are driven by partisanship and climate (wetter vs. drier states).

The poll analyzed three subregions in the West: the Pacific (California, Oregon, and Washington), the Southwest (Arizona, Nevada, New Mexico, Utah, and Texas), and the Intermountain West (Colorado, Idaho, Montana, and Wyoming). Voters in drier states tend to be more concerned about the water supply, while those in wetter states are more focused on quality issues. In the Intermountain West, there is particular concern about exporting water out of the region. 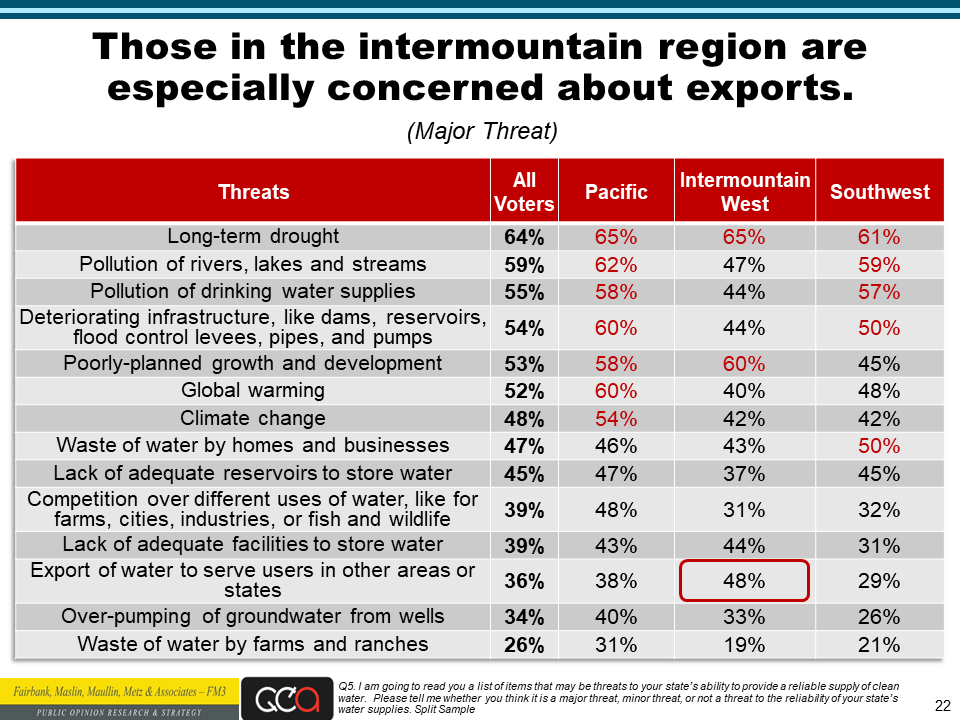 8) While voters view waste of water by homes and businesses as a significant concern, they are relatively unconcerned about waste in the agricultural sector.

The following two slides show how Westerners rate a variety of threats. Inefficient use of water in homes and businesses bothers many more people than waste of water by agricultural users. Although groundwater overpumping is a major problem in many basins, Westerners appear to be less concerned about shrinking aquifers than other water problems. 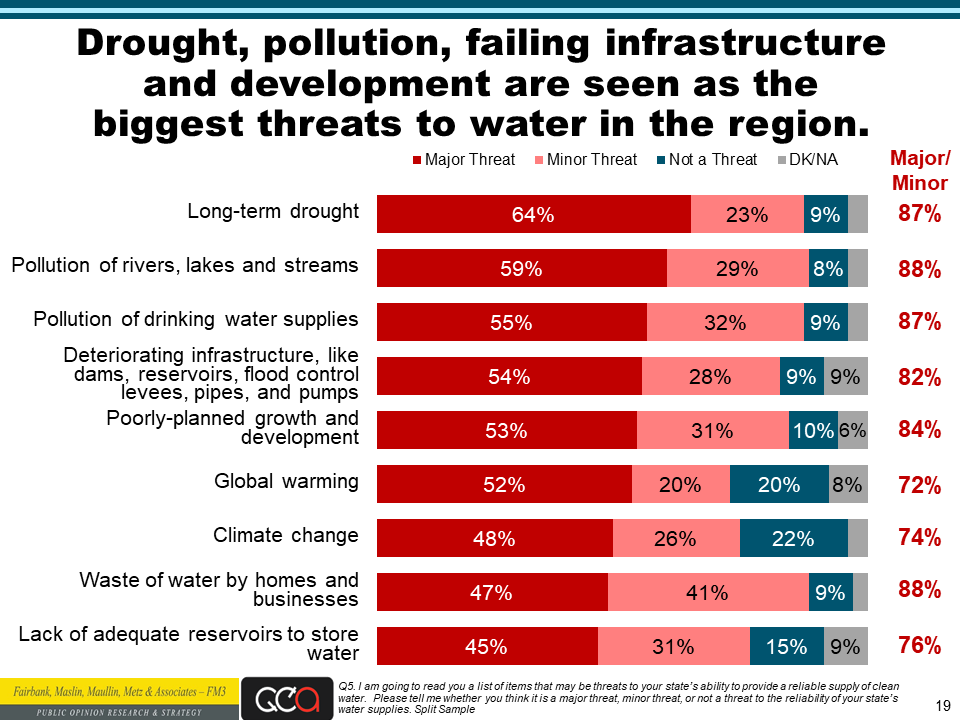 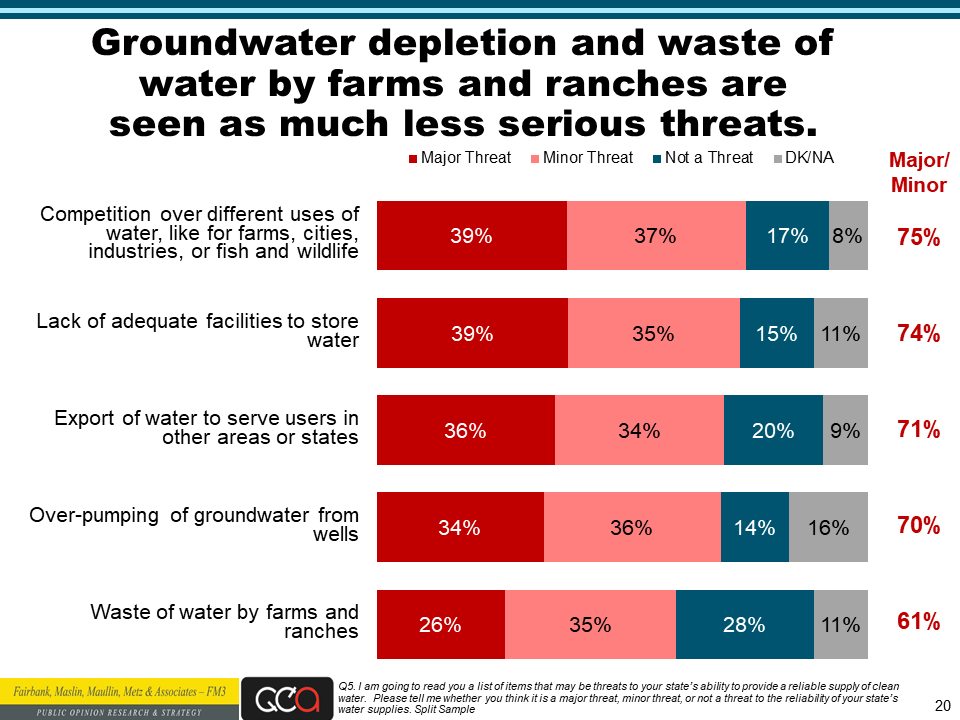 9) When it comes to thinking about water policy, voters say the top considerations should be health and safety, followed by environmental protection, with economic impacts a lower priority.

Human health and safety are paramount for Westerners when they consider water policies, with about four in five voters rating it as a top priority. By contrast, keeping a lid on costs for consumers and supporting recreation jobs were seen as much lower priorities. 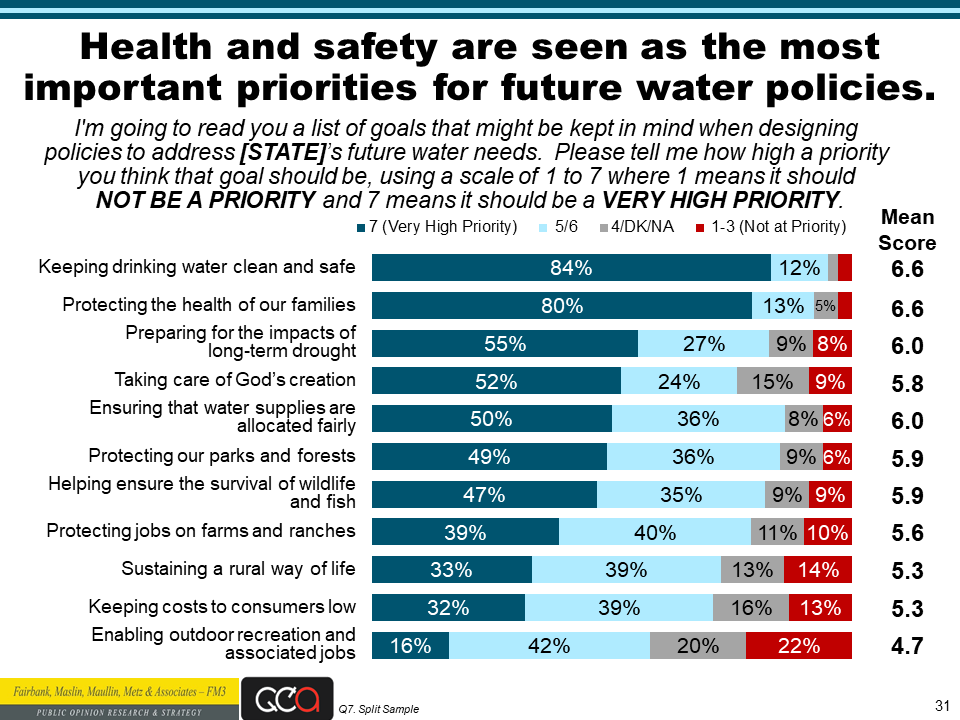 The slide below shows that strategies such as capturing rainwater, cleaning up contaminated groundwater, and expanding the use of recycled water enjoy strong support across the region. 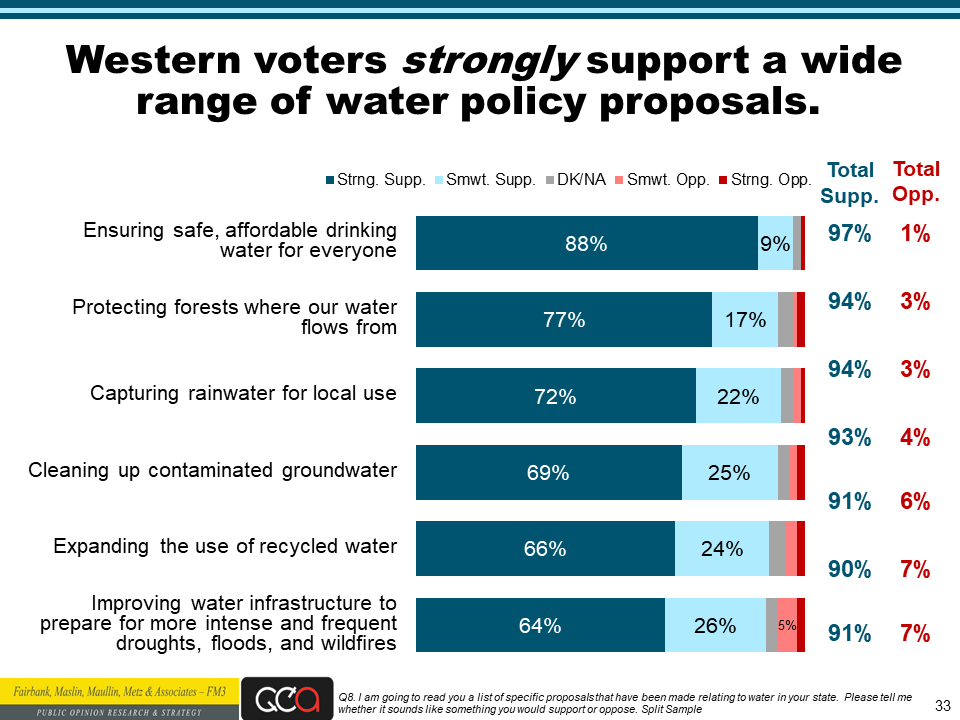 11) Altering the regulatory regime around water – changing state water laws or the terms of water sales – is a distinctly low priority for voters. 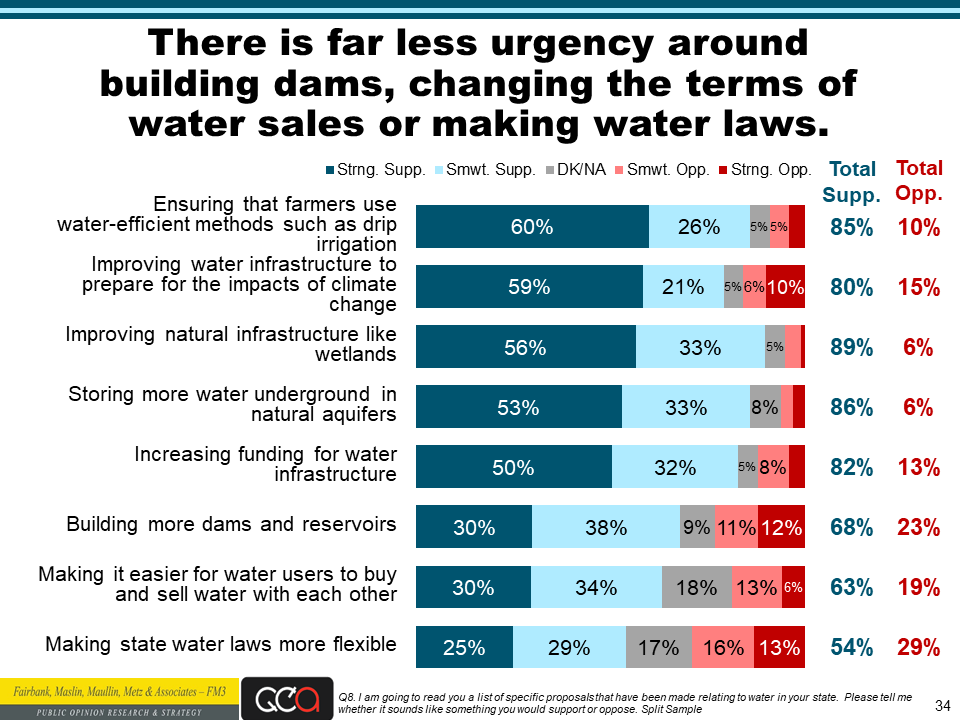 12) There is a fairly broad consensus that climate change is having an impact on water supplies, and that we should take steps to prepare for it; but there are deep partisan – and thus geographic – divisions on how serious a threat is poses.

Although many Republicans are skeptical about climate change, the majority of all voters in the region say they’re concerned about some of climate change’s impacts, such as wildfires, droughts, and heat waves. Fewer Westerners said they were worried about increasingly severe storms and flooding. 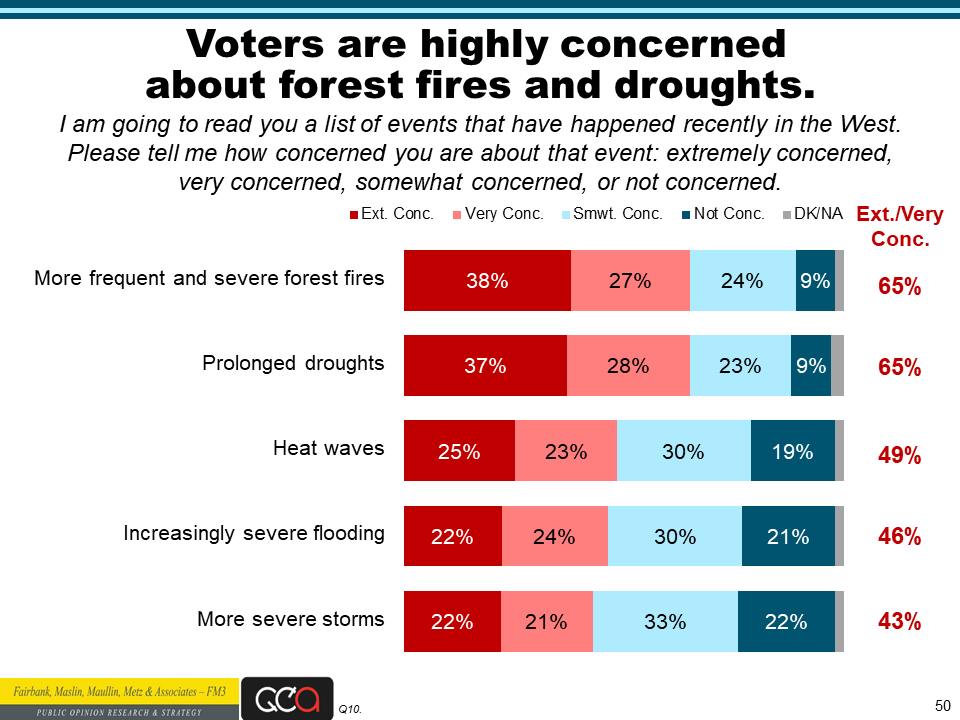 When asked about personal impacts of climate change, voters from different political parties diverge in their responses: 85% of Democrats say they are concerned a great deal or a moderate amount, but just 36% percent of Republican voters say the same. 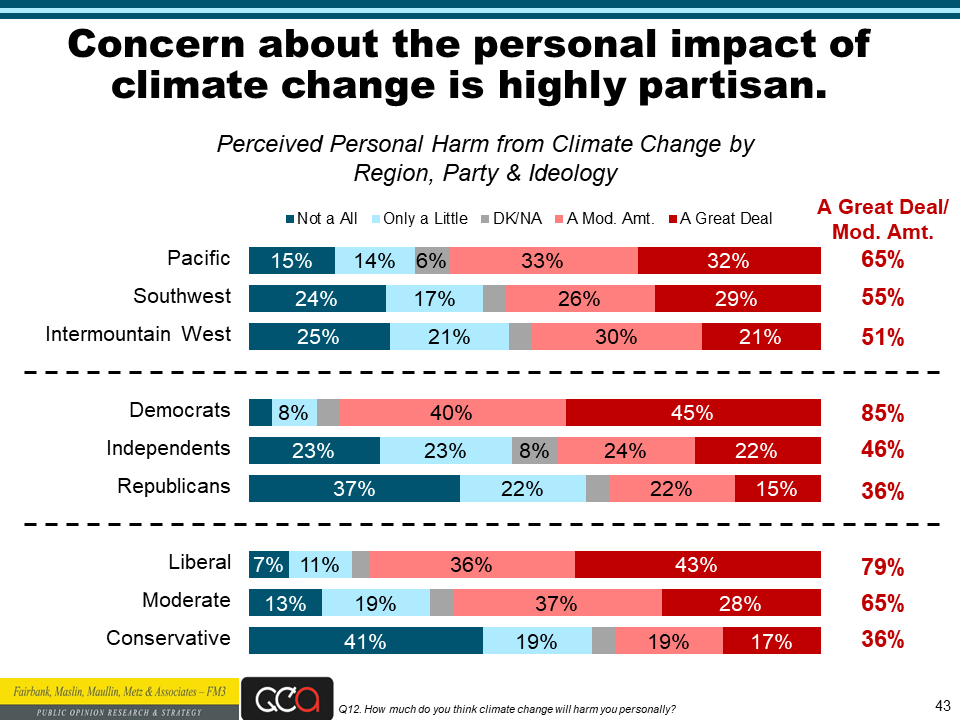 There’s a ton of fascinating data in this poll, so I’d encourage anyone with an interest in Western water issues to dig in. I recently interviewed the Water Foundation’s CEO, Wade Crowfoot, and I’ll be posting my Q&A with him soon.