A new ABC News-Washington Post poll has found that a majority of Americans believe climate change has intensified recent hurricanes.

Compared to similar polling done in the wake of Hurricane Katrina in 2005, a higher share of Americans linked global warming to more severe tropical storms.

The September 2017 survey didn’t cover water issues per se, but I think the recent hurricanes definitely have been a water story: think of the images of flooding in Texas, the overflow of sewage systems in Florida, and the millions in Puerto Rico without safe water to drink.

The graphic below, which includes data from both the Pew Research Center and ABC News-Washington Post polls, shows that in September 2017, 55 percent of Americans cited climate change’s influence while 41 percent said recent hurricanes were “the kind of severe weather events that happen from time to time.” 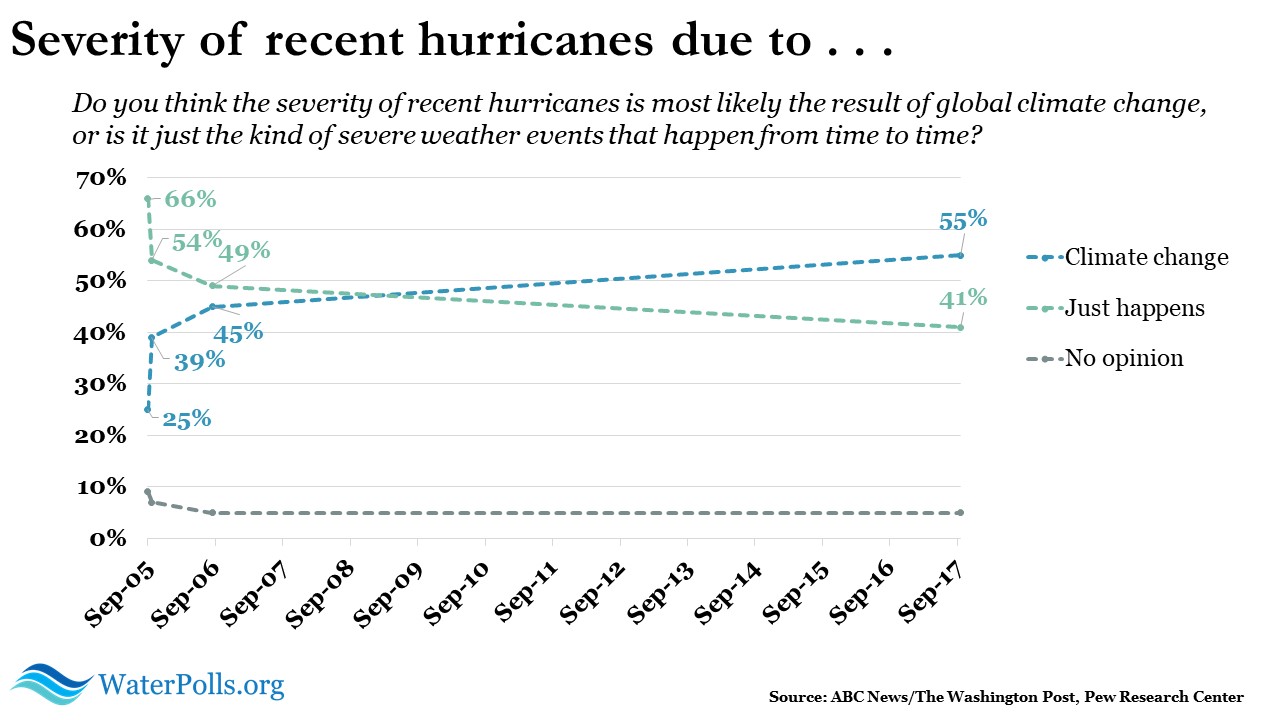 Some 11 years have passed since the question was last asked, so the dashed line in the intervening years shouldn’t be interpreted to mean that support for the climate change position has steadily increased over that period. It’s also worth noting that the trio of polls conducted in the year after Hurricane Katrina showed a sizable shift toward climate change as the likely explanation for storm severity.

The September 2017 survey revealed a sharp partisan divide: 78 percent of Democrats mainly blame climate change, a 47-percentage point increase from 2005, but “after an 8-point bump in the weeks following the devastation of Katrina, there’s been essentially no change among Republicans, with about a quarter blaming climate change in late September 2005, 2006 and 2017 alike,” according to the poll’s press release.

Partisan affiliation isn’t the only dimension to reveal differences in opinion on hurricanes and climate change. The graphic below shows that college graduates are more likely than non-graduates to cite climate change. Likewise, Americans who say they don’t follow any religion are far more likely to blame climate change for storm severity than white evangelical Protestants. 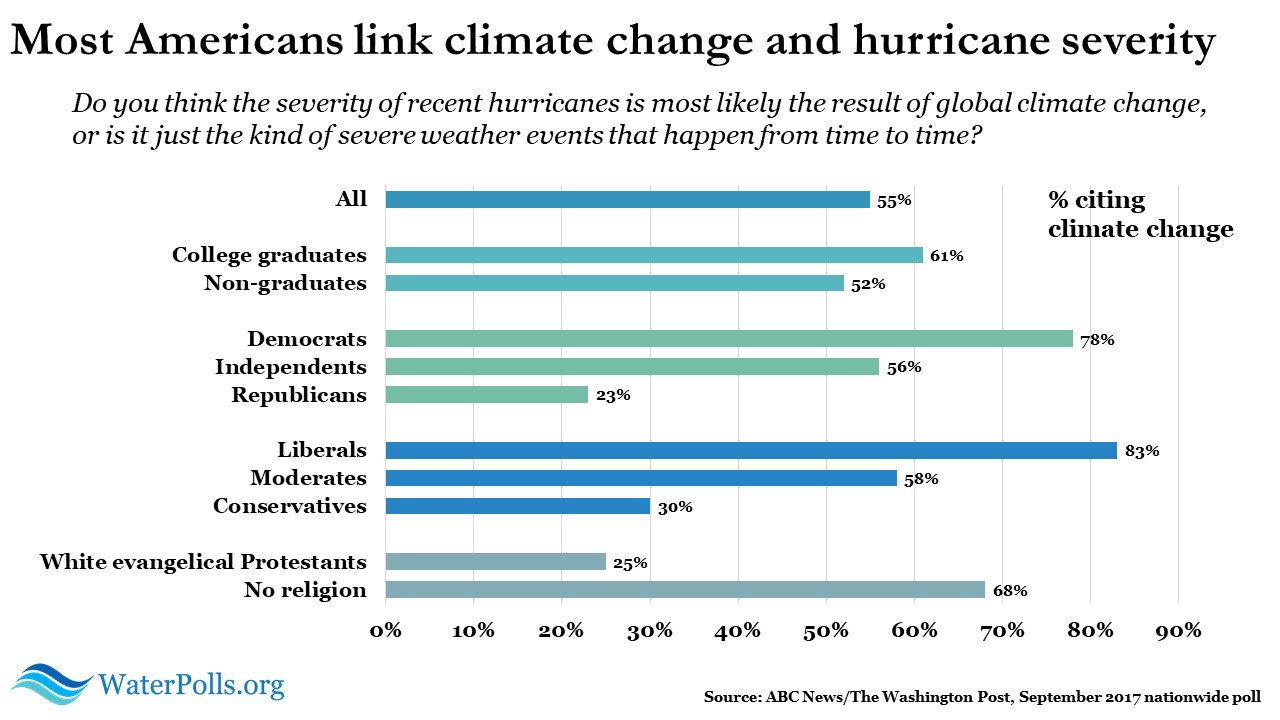 The pollsters reported that age played a role in the results:

Younger adults are much more likely to attribute a role to climate change in the intensity of major storms, and their opinions appear to have shifted sharply over the past decade or so. The new poll finds that 67 percent of adults younger than 30 say climate change contributed to the recent hurricanes’ power, as do 64 percent of those in their 30s. Meanwhile, only about half of Americans ages 40 to 64 say that. The percentage is lower still for people older than 65.

The ABC News-Washington Post poll also found disparities by gender. In 2005, the percentage of women who cited climate change’s influence was 24 percent, regardless of whether the woman had a college degree. Fast-forward a dozen years and that figure has jumped to 63 percent for women with a college degree and 49 percent for those without. A similar trend occurred with men, but on balance, women are more likely to blame climate change, as shown in the chart below. 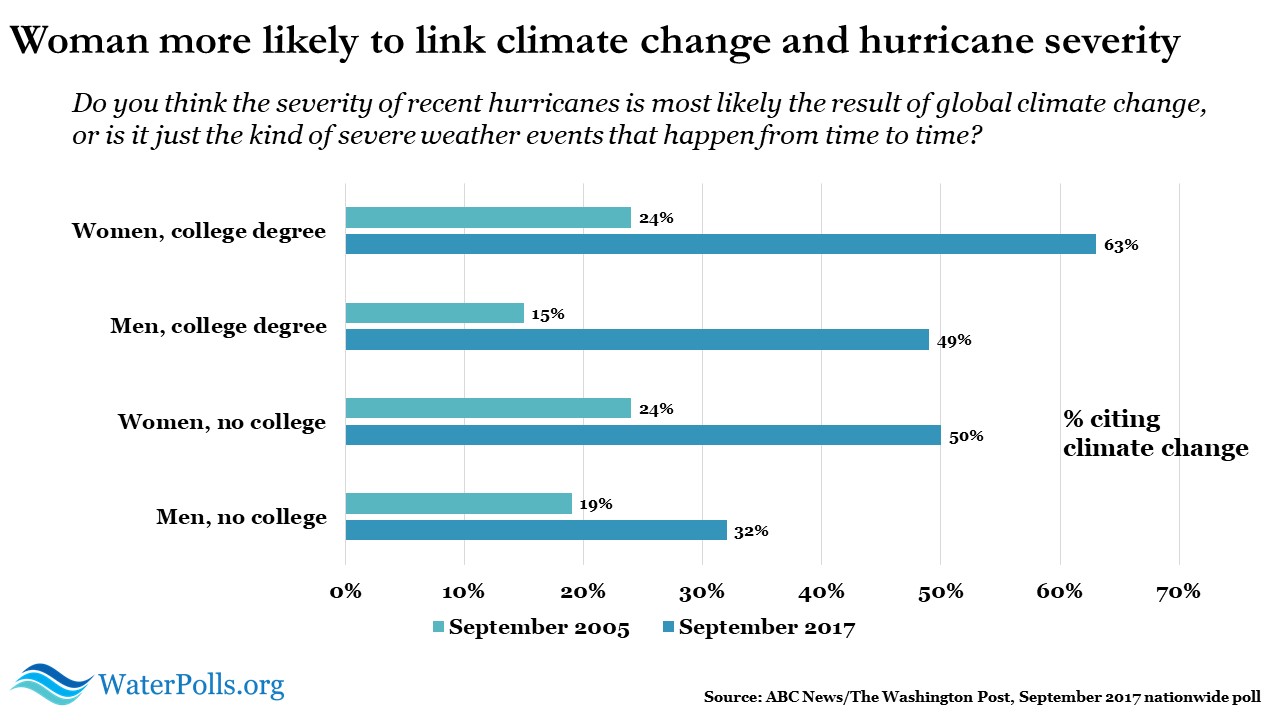 Another interesting finding: residents in Texas and Florida “appear more skeptical of linking climate change and a storm’s punch than Americans nationally,” the pollsters reported. “The poll included 134 respondents living in one of the two states, and just under half say the severity of the recent hurricanes was typical. Forty-four percent say their intensity was made worse by Earth’s changing climate.” It’s certainly possibly that even fewer Texans and Floridians would have cited climate change for intensifying hurricanes had their own states not been hit by Harvey and Irma.

The political polarization over climate change has been repeatedly documented by public opinion researchers, so it’s no surprise to see those divisions reflected in this recent poll. But on the question of hurricane severity, the differences used to be much smaller because only a minority of all Americans said climate change was at play. 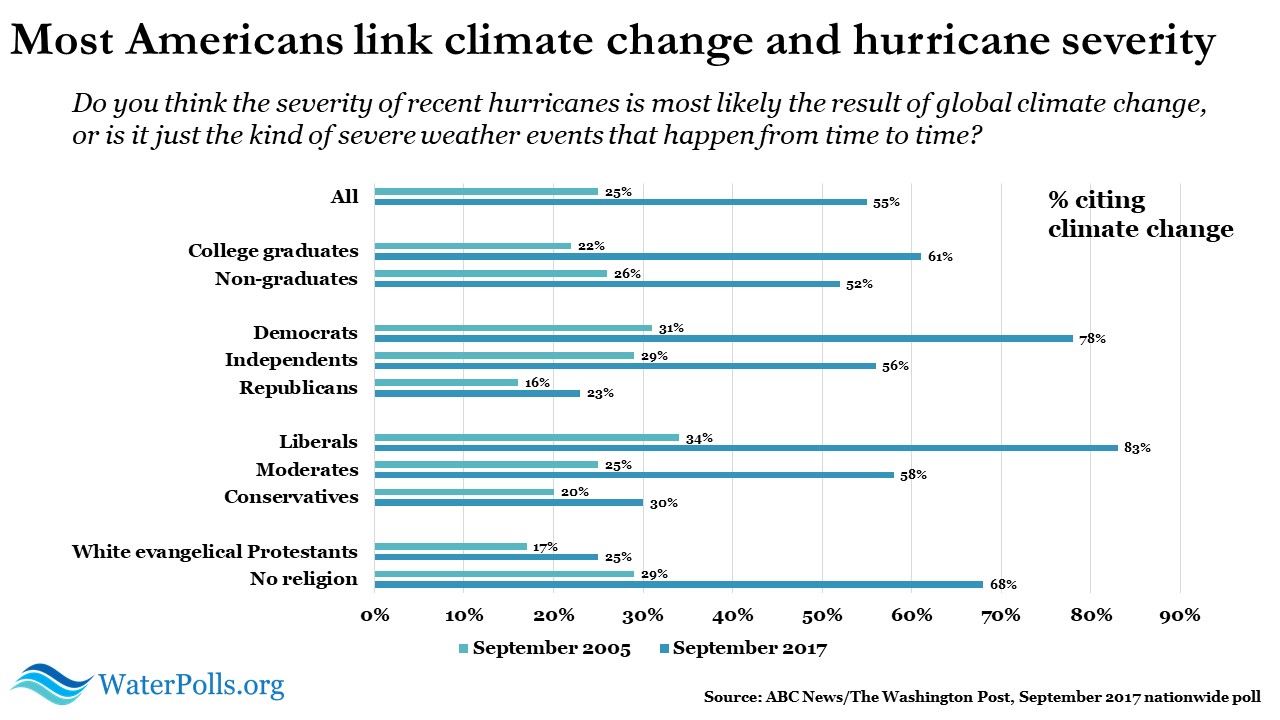 Water tends to be more bipartisan than some other environmental issues, as I’ve noted in previous posts on infrastructure, flood policies, and overall concern. Climate change, however, tends to be dismissed by many Republicans and conservatives, despite strong scientific consensus that it exists, is primarily human-caused, and is already making the weather more severe.

How to bridge the partisan divide over global warming has been a major challenge for climate change advocates, politicians, and others. This poll on hurricanes suggests the recent tropical storms aren’t necessarily going to convince many Republicans to embrace climate change, but that doesn’t mean other water-related impacts, such as droughts and floods, won’t exert an influence on public opinion. In fact, other polling we’ve covered has found a majority of Americans believe climate change is already impacting drinking water supplies.

Here’s how the pollsters describe the methodology of their phone-based survey:

This ABC News/Washington Post poll was conducted by landline and cellular telephone Sept. 18-21, 2017, in English and Spanish, among a random national sample of 1,002 adults. Results have a margin of sampling error of 3.5 points, including the design effect. Partisan divisions are 31-23-36 percent, Democrats-Republicans-independents. The survey was produced for ABC News by Langer Research Associates of New York, N.Y., with sampling, data collection and tabulation by Abt Associates of Cambridge, Massachusetts. See details on the survey’s methodology here.